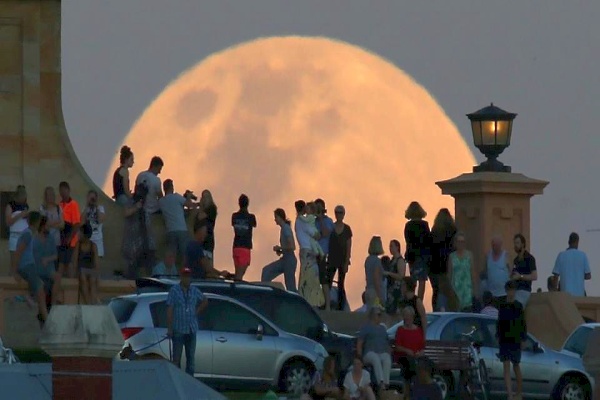 For a seed to achieve its greatest expression, it must come completely undone. The shell cracks, its insides come out and everything changes. To someone who doesn’t understand growth, it would look like complete destruction. ~ Cynthia Occelli

The Full Moon in Scorpio on April 26th (27th), is a Super Moon, a term originally coined by astrologer Richard Nolle, for when a New or Full Moon is also perigee, or at its point in its orbit when it is closest to the earth. Another name for these Moons are Perigean Full Moons, which are also associated with the Perigean Spring tides, higher than the usual high tides. Perhaps a nuisance at best, and usually harmless, but when combined with weather events these Spring tide events can be epic. Even small incremental changes can have a tremendous impact on the sensitive environmental tides and affairs of both the natural world, and humanity. And so it is probably wise to keep a leery eye on these super close Full Moons.

This is not the closest Full Moon of the year. That will be the Total Lunar Eclipse on May 26th (a rare Blood Moon event that will be most visible in the Pacific ring). But it is the 2nd closest Full Moon of 2021. Even regular Full Moons are times of culminations, disclosure, completion and revelation. Things come to a head, feelings and emotions come to the surface, and one would imagine all the more so with a Super Moon in intense and emotionally laden Scorpio.

The Full Moon reaches its maximum in the evening hours of April 26th, here in the States, 11:31 pm Eastern, 8:31 pm Pacific Time; and at 4:31 am on April 27th in the United Kingdom. At 7º Scorpio it shares the same degree as the fixed star Khambalia, the keeper of secret knowledge. But nothing is likely to remain hidden for long when the Full Moon shines a light into the dark and hidden recesses of Scorpio’s secret lair. All the more so, as Mars, the traditional ruler of Scorpio is still Out of Bounds; and Pluto, the modern ruler of Scorpio, is stationing for its retrograde phase, also on April 27th.

We are now well into Taurus season, where Venus, Mercury and then the Sun will cross paths with Taurus’s unruly tenant, Uranus, this week. As a result, what comes to light in the Scorpio Moon may be shocking, unprecedented, and perhaps even scandalous. This Moon is positioned, therefore, to shatter myths, and stretch us out of our comfort zones. Uranus is strongly highlighted. But then so is Saturn by default: reluctant and resistant. Even before the Full Moon we are riddled with conflict and utter distraction: Should we veer on the side of caution and stick with what we already know, our original plan, and what we are familiar with? Not do anything? Or should we dare to take a risk, let go the bow lines, knowing that in order to be able to further grow and evolve, some sort of change is well nigh due.

If we include the Moon, on the day of the Full Moon we will have a total of 7 planets in fixed signs. That’s a lot! With so much fixity there will be a lot of resistance to, or fears about impending change. This will totally exacerbate the prevailing Saturn/Uranus square. Where we are already seeing conflict and divisiveness, people will more stubbornly cling to their own ideas and beliefs. And with Mars now entering the sign of self-protective Cancer, we will all be inclined to circle the wagons in an attempt to defend our own point of view. In our own personal lives, this is most likely to manifest through inner conflict.

Fixed signs are cautious and resistant to change. But with all this emphasis on radical Uranus, we are all being asked to embrace the changes that have already been made, those that are in the process of occurring, and those that we might want to see ourselves making in the future.

Scorpio is a sign of rebirth, as is the planet Pluto. What has been lost can be re-found. What has ended can once again be reborn. As Pluto rolls, and roils and turns in his underground caverns, we might ask ourselves: What do we need to let go of, in order to be able to grow and evolve, in order to be a freer, more authentic version of ourselves? What are we so desperately holding on to? This may be an idea, an attachment, an expectation, a habit, or something else that no longer serves us, and may in fact be preventing us from growing and evolving. What is coming to the surface? What is being revealed in the light of this Super Full Moon? Secrets can be scandalously disclosed with the Full Moon in Scorpio. But so can rare (and even priceless) gifts and gems.

I am the secret queen, Persephone. All tides are mine, and answer unto me. Tides of the airs, tides of the inner earth, the silent secret tides of death and birth~ Tides of men’s souls and dreams, and destiny. ~ Dion Fortune

Except for the brief Mercury retrograde in February, all of the planets have been direct since January. Every one. But that’s all about to change this week when Pluto stalls for its retrograde phase. Pluto is retrograde for almost half the year, so it may not seem all that remarkable. Yet it is at these stations, at the beginning and ending of the retrograde phase, that Pluto makes its presence known. This can feel literal at times. We have seen mines collapse, major seismic events, and volcanoes rumble when Pluto stations.

And as Pluto rolls about in his cavernous depths, he unveils the dark underbelly in society, that can no longer be ignored. He’s showing us what needs to be healed, repaired, and transformed. Likewise, Pluto can bring things to the surface in our own lives: all our fears, our wounds, our shames, our hungers and desires. Those parts of us that need mending. Pluto can seem to bring us to our knees. To the very edge of despair and destruction. However Pluto also brings us the tools to then transform, heal, and rebuild better, stronger, perhaps much more reliable structures and foundations in our lives, upon which we can then depend and rely on well into the future.