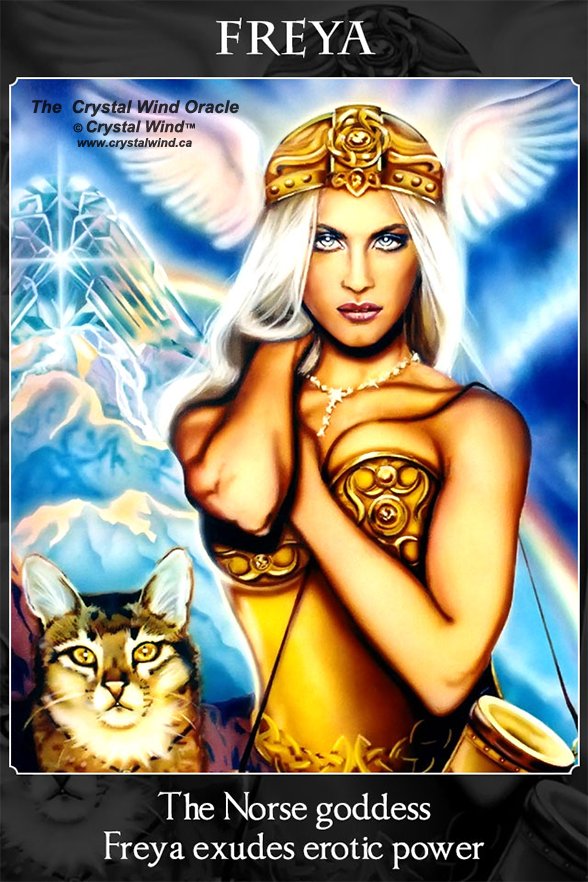 Freya was a warrior goddess, a Valkyrie, and also the goddess of sensual love. Though this captivating goddess had numerous lovers, she was the wife of the mysterious Norse god Od.

Freya was a spectacular beauty known for her appreciation of romantic music and stunning floral arrangements. That was her softer side; she was also known as the goddess of war and death.

As leader of the Valkyries, she had considerable power. She had the right to claim half the souls of the bravest warriors who died in battle. Actually going onto the battlefield, she would gather them up and take them back with her to spend the after-life in her home in perpetual rest and recreation. A sweet and generous woman, she always invited their wives or lovers to come and live with them.

The other half of the heroic warriors, who belonged to Odin, would be gathered up by the Valkyries and taken to Valhalla where they were able to live in comfort and honor.

She was also called upon to comfort those who were dying, to ease their transition into Valhalla (the "otherworld"), serving as a guide and companion on the journey to Valhalla for many Viking heroes who had died nobly.

When Freya and the Valkyries rode forth on their missions, their armor caused the eerily beautiful flickering light that we know as the Aurora Borealis, or Northern Lights.

Freya and Od were wed, but soon after their wedding Od disappeared and all feared that he was dead, perhaps killed by the ruling deities for disobeying their orders.

Freya was distraught and cried tears of gold, but refused to accept that he was dead.   Putting on a magical cloak made of falcon feathers that allows the wearer to fly across vast distances very quickly, she rose into the sky and searched all over the earth for him.

Indeed, Od had not died but had been banished and lost at sea. When Freya found him he had already degenerated into a sea monster. Hideous as he appeared, Freya stayed by his side and comforted him.

When someone stumbled upon the sea monster and killed him, Freya was enraged and threatened to take her revenge for the slaying the most noble of the gods.  Fortunately it all worked out as Od was admitted to Valhalla even though he had not died in battle, and was allowed to have conjugal visits from Freya so that the two were never separated by his death.

Freya's name was "The Lady" or "mistress", and may be the source of our name of the fifth day of the week, Friday. With her twin brother, Fryr ("The Lord"), these divine twins were the Norse deities of untamed nature.

Freya had many other lovers, although she deeply loved her consort Od. (Remember, monogamy had not been invented yet and infidelity was the social norm.) Aphrodite's amorous escapades pale by comparison with those of Freya, whose unbridled sexuality was legendary.

Usually depicted as a strawberry blonde with stunning blue eyes, none could resist her. To make matters even worse, like the Greek goddess Aphrodite, she possessed apparel that made her irresistible to men. . . a magical necklace reputedly made of amber and rubies that was called a "brisling" or "brisingamen".

Freya had left it a bit late to leave her friend's house to start home. The sun set, and it began to snow. Soon she was becoming disoriented and frost-bitten. Luckily she was found by four dwarves who rescued her and took her to their home. The dwarves were named "North, South, East, and West".

Freya volunteered to pay them for their hospitality and the four dwarves cheerfully agreed, saying that they would like to be repaid by having her sleep with each of them for one night. Freya wasn't at all interested and promptly declined.

She saw the incredibly beautiful necklace that they had just made. She had to have it and offered to return after the storm and pay for it in gold. They may have been dwarves, but they weren't stupid -- they told her it was not for sale at any price, but countered with an offer that they would be delighted to simply give it to her if she were willing to pay their price for her room and board during the storm.

When Freya returned home after the storm subsided, she was wearing the stunning "necklace of desire".

The goddess Freya's passions were abundant, vigorous, and unrestrained.  Clothed or not, she is usually shown in sensual poses.

She is often depicted riding her golden chariot through the skies, the chariot pulled by two large blue cats who were a gift from the Norse god Thor.

Freya chastised Thor soundly one morning for awakening her from her beauty sleep with his boisterous and noisy preparations to "go fishing" for a sea dragon. While he was on the way to his fishing spot, Thor kept hearing lovely song-like noises that seemed to be lulling him to sleep.

Stopping to investigate the source of the odd sounds, he found them coming from a nest of mewing blue kittens being tended by a tomcat. The sound that Thor had heard was the male cat singing to the kittens, "Sleep, sleep, my dear little ones".

Thor suggested (in forceful terms) that the cat stop singing the lullaby and the cat sassed him back, suggesting that Thor had no idea how difficult it was for a single-parent male to rear his children and asking if he knew any women who would be willing to take them in.

Immediately Freya came to mind, and Thor agreed to take them to her. Like all cats, this one was not quick to show appreciation and added that, being blue, they were very unique cats and deserved an especially fine home. Thor took offense at the comment and thundered back at the cat who, not the least impressed, bared his claws and then turned into a bird and flew away.

Kindly Freya was enchanted with Thor's present and did the kittens honor by letting them accompany her on her daily rounds across the sky.

In archetypal psychology, dwarves often represent the parts of self that we have neglected or even rejected.

The goddess Freya reminds us to explore and acknowledge all of our emotions, longings, and traits, even those we wish we didn't possess.