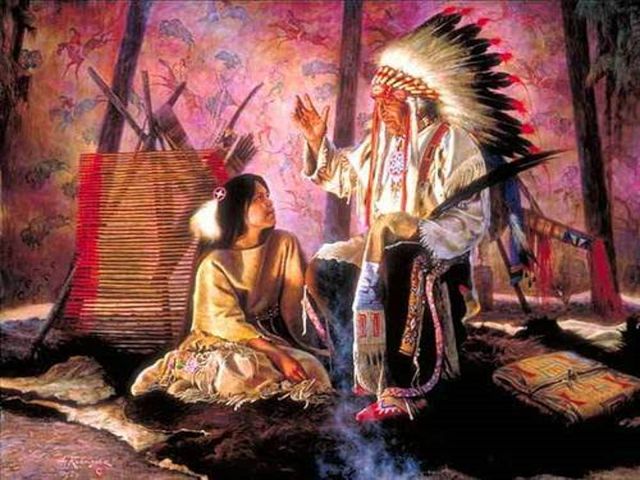 The Native American tribe Cherokee is indigenous to the Southeastern United States. This tribe believed that they have been given a gift by the Creator which enabled them to understand and use medicinal herbs.

They believed and used the benefits of nature’s pharmacy. Moreover, as plants can become scarce over time, they had a unique gathering method and they picked every third plant they found and thus made sure that they will leave sufficient to continue to propagate.

However, the following 12 plants were used by this tribe in the treatment of almost every single illness and health condition. However, before we explain their properties, we must warn you that they can be quite strong and dangerous if not used properly.

Keep in mind that the Cherokee healers were experienced as they had centuries of practice. Furthermore, it is of high importance to understand their value as powerful natural medications, so you should be gentle when scavenging them.

These are the natural plants that provide amazing health benefits:

Another Native American tribe, The Meskwaki, cured earaches by using crushed, steeped stems of wild ginger. The rootstocks can replace regular ginger and flowers as flavoring for numerous recipes you prepare.

The Cherokee used this medicinal plant to treat mouth and throat issues, inflammation, cysts, and fibroid tumors, and it has been found to regulate high blood pressure and treat lymphatic blockages.

The Cherokee usually used it as a diuretic to stimulate the function of the kidneys, as well as in the case of:

The Cherokee would steep the leave and flowers in a boiling water for 5 minutes and then consumed it warm in order to obtain best results.

Pull Out a Sticker (Greenbriar)

This plant’s roots are rich in starch, which is full of calories, but has a strange flavor. The stems and leaves are high in numerous minerals and vitamins. As it has a rubbery texture, you can use its roots like potatoes.

This plant has been used as a mild diuretic in the case of urinary infections and to purify the blood. Its bark and leaves have also been used for the preparation of an ointment which heals burns and minor sores.

Its leaves can be added to tea in order to treat arthritis, and the berries can be either consumed raw, or made into jam.

Mint is extremely popular nowadays, and it is often consumed in the form of a tea. However, only a few know that it has strong antioxidant properties and that it is high in vitamin C, A, fiber, magnesium, calcium, potassium, and phosphorus.

It has been used by the Cherokee to improve digestion, and its leaves were made into ointments, crushed and applied as cold compresses, or added to baths in order to treat skin itchiness.

Moreover, its leaves and stems were also used as a treatment for high blood pressure. You can also prepare a mint water to treat your cracked nipples while breastfeeding!

This has been the most popular medicine in the case of an upset stomach, but it also has numerous other uses. It can be used to relieve bleeding gums if you chew the leaves.

You can make a cough syrup by preparing a decoction from the roots, sweetened with maple syrup or honey. The strong tea from its root reduces the swelling of the joints and tissues.

These delicious berries are rich in important nutrients, such as vitamin A, vitamin C, vitamin B6, vitamin E, vitamin K, riboflavin, thiamine, folate, and niacin, as well as potassium, zinc, calcium, magnesium, iron, and phosphorous. Furthermore, they are abundant in essential amino acids and dietary fiber.

These are some other benefits of this plant:

This plant has been regarded as a potent preventative medicine, which is easily digested and promotes recovery from various health conditions. Despite the seed heads and the mature leaves, all other parts of this herb have medicinal properties. Its root is rich in starch and the male plants are rich in pollen.

It can be prepared similarly to potatoes, mashed and boiled. The resulting paste treats sores and burns. Also, its pollen is rich in protein and can be used as a supplement in baking.

Its flowers can help in the case of diarrhea. You can also use the fuzz from flowers, known as the seed down, in order to prevent skin irritation in babies, like diaper rash.

This entire plant has potent medicinal properties, as its bark can be prepared as a mild decoction which soothes diarrhea and a sore throat, the ripe berries are high in vitamin c, so you can consume them in the form of juice, and its leaves can be used in the preparation of a tea which reduces fever.

Also, you can make an ointment from its crushed leaves and use it to relieve a poison ivy rash. Furthermore, according to a study published in Iranian Journal of Pharmaceutical Research, the regular consumption of sumac lowers cholesterol levels.

This plant’s fruit is high in vitamin C and effectively treats the flu and common cold. The Cherokee prepared a mild tea out of wild rose hips to stimulate the function of the kidneys and the bladder.

The wild rose petal infusion can be used to soothe your sore throat, and a decoction of the root will treat diarrhea. Its petals can also be used in the preparation of a tasty jam.

This medicinal herb successfully helps in the case of asthma and chest congestion. The Cherokee believed that inhaling the smoke from burning mullein roots and leaves effectively calms the lungs and opens up pathways. Its flowers can be used in the preparation of tea with a mild sedative effect.

This herb has an amazing soothing activity on the mucous membranes. In order to reduce joint pain and swelling, you can prepare a warm decoction and soak your feet in it. It has strong anti-inflammatory properties which relieve the pain and irritation of tissues.

This herb has been a common ingredient in the kitchen, as it is similar to spinach, but includes much more minerals and vitamins. Its roots gather nutrients from deep underground.

Its leaves are high in iron and act as a laxative. Prepare a juice decoction out of the stems to soothe the itching, minor sores, or diaper rash. Moreover, the decoction from its crushed roots has powerful antiseptic properties and can be used as a warm wash.

The Squirrel Tail has powerful blood clotting properties, so in order to stop the bleeding, you can apply some fresh and crushed leaves on the wound.

Its juice mixed with spring water stops internal bleeding from the stomach and intestinal illnesses. Its leaves can also be used as a tea to improve digestion and boost the function of the stomach, and they are also incredible in the treatment of acne.

Thank you!
ॐ Namasté - Blessings!
"Life is an echo, what you send out comes back."
© 2008-2022 crystalwind.ca. All rights reserved.
Crow Medicine
The 7 Sacred Grandfather Teachings
There Is No Time - A Message From WindWalker
Get This App Now!

We have 780 guests and no members online