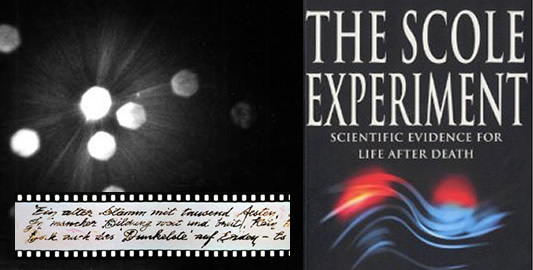 The Scole Experiment chronicles the extraordinary results of a five-year investigation into life after death. At the beginning of 1993 four psychic researchers embarked on a series of experiments in the Norfolk village of Scole. The subsequent events were so astounding that senior members of the prestigious Society for Psychical Research asked to observe, test and record what took place.

The investigators encountered evidence favouring the hypothesis of intelligent forces able to influence material objects, and to convey associated meaningful messages, both visual and aural.

For five years a small group of amateur investigators gathered in a farmhouse cellar in Scole (UK) and held seances. The resulting phenomena included moving lights with no apparent source, "apports" (materializations) of odd items, the touches of unseen hands, disembodied voices, and eventually images recorded on photographic film and videotape. It's hard not to be skeptical when reading the early stages of this book - the claims sound wild, some of the "spirit communications" are rather puerile, and the experimental controls were, at first, minimal. Later, however, seasoned investigators of the paranormal were invited to observe the seances and take precautions against fraud. The phenomena persisted. The group even met in other locations, sometimes in other countries, and continued to produce results. While critics will go on crying fraud, it is hard to believe that such remarkably varied and carefully documented effects could have been fraudulently produced for so many years, in so many different venues, under the watchful eyes of so many different observers, without detection. On the other hand, it's also hard to believe that such fantastic claims could be true, especially since the phenomena abruptly ceased for reasons that remain cryptic. The Solomons do a careful and serious job of presenting the facts and the arguments, both pro and con, and their book includes numerous photos, many in color. THE SCOLE EXPERIMENT caused a sensation in England and is finally available in the US. It should be read by anyone with a serious interest in the paranormal.

These experiments may finally convince you there is life after death. The scientific team in charge of overseeing these experiments include world renowned Cambridge Scientist – Dr. Rupert Sheldrake, Dr. David Fontana and Researcher Montague Keen who died during the filming of the documentary.