The Ecliptic and Sidereal Astrology

What is the Plane of the Ecliptic?

The plane of the ecliptic (also known as the ecliptic plane) is the plane of the Earth's orbit around the Sun. It is the primary reference plane when describing the position of bodies in the Solar System, with celestial latitude being measured relative to the ecliptic plane. In the course of a year, the Sun's apparent path through the sky lies in this plane. The planetary bodies of our Solar System all tend to lie near this plane, since they were formed from the Sun's spinning, flattened, protoplanetary disk.

The Ecliptic Plane was so named because a Solar eclipse can only occur when the Moon crosses this plane. Its position changes over time, so must be accompanied by an epoch, usually defined as 1950.0 or 2000.0. The ecliptic plane and the celestial equator intersect each other in two diametrical imaginary points called the vernal and autumnal equinoxes. As of 2005, it is at an angle of 23°27’ to the celestial equator, while the inclination of the lunar orbit is approximately five degrees and nine minutes. The moon is inclined to the plane by five degrees.

No matter the position of the plane of the ecliptic, the Earth's axis is not perpendicular to it and is always inclined at the same angle to it. 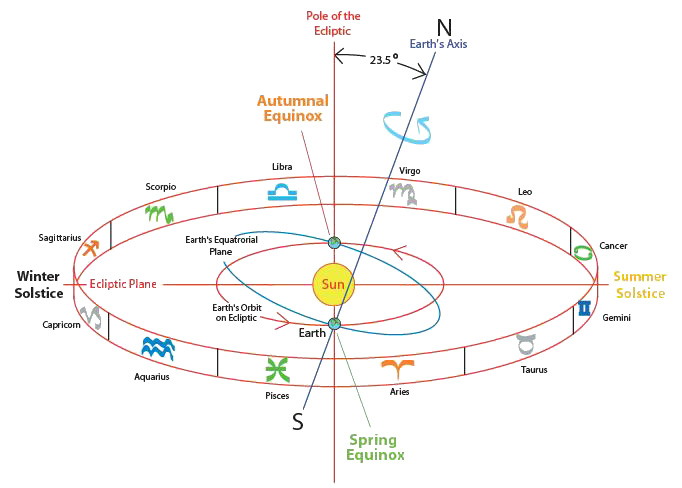 The Ecliptic - The Zodiacal Band
By Molly Hall

The ecliptic is the line along which the planets orbit, against the backdrop of the fixed stars. These are also our known constellations of the Zodiac. As it passes through the constellations, the Sun appears to follow along a pathway around the Earth. And in the background, are the constellations of the Zodiac. But it just looks like that from our vantage point. The Earth is actually orbiting around the Sun, and is always at a position on the ecliptic directly across.

What is the ecliptic? It's the set line that follows the planetary movements in a circular path. It allows astrologers and other sky watchers to have a fixed reference point for study. The earliest astrologers tracked the Sun against the Zodiac, and created a starting point where the celestial equator meets the ecliptic.

At one point, the actual constellations matched up with that zero point, but now they don't. Because of the Earth's tilt and its resulting slow wobble, the intersection of the equator and ecliptic go back slightly in degrees each year. The result is that the actual point of intersection is moving backwards through the Zodiac. To make a long story short, the signs that we refer to as points along the ecliptic, don't match up with what's seen through a telescope. In tropical astrology, which is what's practiced most in the West, the 0 degree point of the ecliptic is always the Vernal Equinox, when day and night are equal length. 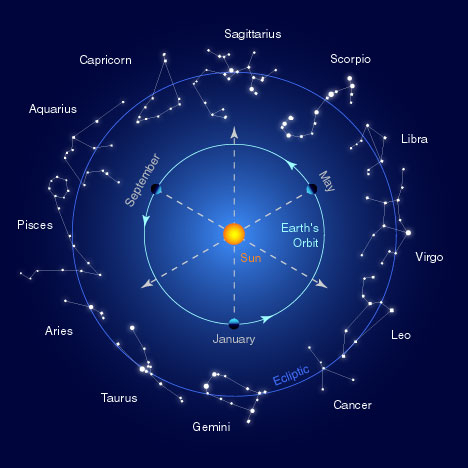 What is Sidereal Astrology?

Sidereal comes from sidus, the Latin word for star. That's meaningful, because sidereal astrology is a system that sets the ecliptic by the position of the fixed stars, rather than the Vernal Equinox. The actual Zodiac begins earlier each year, which means Aries comes in April. And in this system, if your tropical Sun sign is Aries, you might find out you've been a Pisces all along! This is an area of a lot of confusion and debate, and the interest in sidereal astrology, a system with ancient roots, is growing in the West. 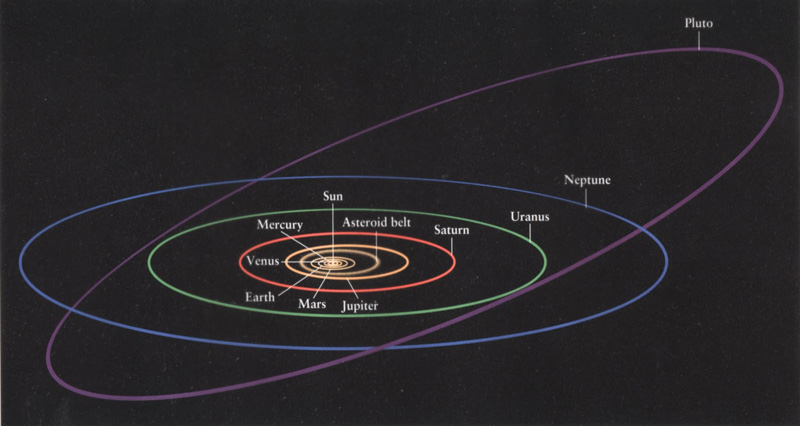