What Is A Solar Eclipse and How Does It Affect Our Life? 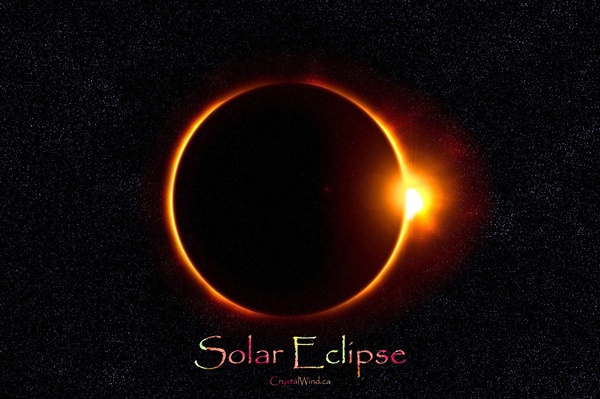 Since we usually have two Solar Eclipses each year and they often affect us for several years after they occur, today we’ll explore what they are and how their influence works. They are recurring important stellar events, and there are a lot of myths about them. Historically, an eclipse, whether Solar or Lunar, is one of the most dreaded events in all of astrology.

In the next 12 months, we’ll have an abnormal number of Eclipses, as we’ll experience three Solar Eclipses (one next week and 2 in 2020) and FOUR Lunar Eclipses in 2020. The one coming next week, as well as the one coming in June are Annular eclipses, with next December’s a Total Eclipse. The Christmas day Solar Eclipse of 2019 occurs at 5 Capricorn, the June Eclipse is at 1 Cancer, and the one next December will fall at 24 Sagittarius. Seven Eclipses in 12 months is a very rare occurrence!

This Annular Christmas Day Solar Eclipse at 5 Capricorn occurs at 9:13 pm PST on December 25, 5:13 am GMT December 26. I’ll explain more about its unique qualities over the next week or so. Today we’ll discuss Solar Eclipses in general.

Tables of various eclipse cycles have been kept since antiquity in several cultures, and it is said that the ancient Babylonians had eclipse tables over a 500,000 year period. Traditional sources of antiquity state that when the shadow of an eclipse falls on a nation or people, it is assumed to have dire consequences for the future of that nation.

Historically, more than not this is accurate. Yes, that means the one in August 2017 at 29 Leo which tracked across the entire US indicates that those places in the Eclipse path, as well as those states, towns, and people in power with anything near 29 Leo, have been and continue to be affected! Think of how the US has changed since August 2017 to get a sense of the process.

Without this becoming a boring recitation of different empires crashing under the weight of their own excesses rather than an astronomical phenomenon, I will remind you that an astrological event does not make anything happen, correlations notwithstanding. That being said...

There are many cycles of eclipses, some recurring relatively frequently, some taking decades, even centuries to recur. The ancients felt that its shadow signified the passing from power of a ruling family or dynasty, the invasion of the nation by hostile foreign powers, the death of an era, even famine, drought, or pestilence.

Solar Eclipses indicate the shadowing of the "great light" by another object that obscures that light, if only momentarily. So an eclipse blocks the light of the Sun for a period of time, from a few minutes to a few hours, and in those places that the Eclipses are most visible, the skies go dark and we can see other, fainter light coming from stars we wouldn't ordinarily see.

Leaving aside any argument of causality, I have found that where an eclipse falls in a birth chart corresponds with something ending in that part of the life. Whatever house it occurs in is where something is about to end in a significant way. It could be said that eclipses are “Cosmic Recyclers,” taking away what we no longer need, creating space for new things to present themselves.

We can learn a lot about how they impact us by seeing how they aspect our planets and angles. If the eclipse conjuncts a planet, we can expect to see endings in that old planetary psychological function in the house (life area) the Eclipse falls in. And of course, it will affect the houses ruled by any planet it touches.

For example, if an eclipse conjuncts your Venus, you may assume that sooner or later you will confront the end of an old way of enjoying life, an old value, or an old relationship. You will see this work out in the houses ruled by Taurus and Libra.

If it conjuncts Mercury, an old mindset, perception, attitude, or way of interpreting or communicating that was a significant part of your life will pass away through the life areas ruled by Gemini and Virgo. If an eclipse conjuncts your Saturn, an old important responsibility, limitation, obligation, hindrance, or fear will leave the life as seen in the areas of life (houses) ruled by Capricorn and Aquarius.

If the eclipse affects the Moon, expect the ending of an old habit or way of experiencing life. Usually there are major personality shifts and endings associated with parts of the life represented by the houses where you have Cancer and Leo.

If a Solar Eclipse impacts our Jupiter, an old vision, philosophical view, or an obsolete moral stance will end, or there will be something taken away that affects the houses with Sagittarius and Pisces on the cusp. This contacts show an end to a spiritual focus or aspiration, or a line of opportunity ceases and another one opens wherever the Eclipse falls in the chart.

If the eclipse falls on your Sun, you can expect the end of your Light or Life in some way. This shows the passing of an old life order, but of course since Nature abhors a vacuum it also shows that a new life and light will begin. It will most affect the houses with Leo and Cancer on the cusp, and transform the part of the life represented by the house the Eclipse falls in.

So it primarily shows as an ending in the house in which it falls. It shows as an ending of a psychological function if it conjuncts a planet, and this works out through the houses ruled by the planet it touches. Of course, if it affects a planet, it also affects all the other planets that are connected to the eclipsed planet by sign rulership, i.e., if an eclipse conjuncts your Venus, it will naturally affect planets you have in Taurus or Libra.

It is useful to remember that in a chart all the planets represent important people in your life, both past and present. If an eclipse conjuncts your Jupiter, expect a relationship with a Jupiterian, or someone with strong Sagittarius or Pisces in their charts, to end or go through such a radical change that it will seem like you're relating to an entirely different person. If it impacts your Sun, expect the passage of someone of power, authority, or significance to your life or illumination.

The same with Saturn and the rest of the planets. When an eclipse conjuncts your Saturn, it usually signifies the passing of an elder, someone in a position of power in your life, or someone who kept you under a limitation or fear. It also indicates the ending of an old duty, responsibility, or purpose in our lives so we can redirect the energy of Self-mastery to other ends.

All Eclipses indicate coming endings, obscurations, and the passing of people and things out of our lives, and maybe even deaths, both literal and metaphoric. We always are under the influence of more than one Solar Eclipse from the past, and there’s always a Lunar Eclipse two weeks before or after a Solar Eclipse.

So Eclipses occur several times a year, and not all eclipses are equally influential. Their strength is determined by their magnitude (brightness) and longevity. We’ve been on a run of very bright Solar Eclipses for the past 7 years, with only their length fluctuating to any great degree. Some have been of VERY long duration, showing effects lasting years, while others have been so short that the influence came and went fairly quickly.

2017’s Eclipses were relatively bright but only one was of any significant duration, while all of 2018’s Solar Eclipses, as noted earlier, were relatively short and weak. The one in August was the strongest since Summer 2017, and slightly stronger than the one which occurred in January 2019. After that one, all the Solar Eclipses for 2019 and 2020 are powerhouses!

One more thing to note: a Solar eclipse is a New Moon, while a Lunar eclipse is a Full Moon. Like all lunations, the Full Moon brings to form the promise of the seed represented by the New Moon. Eclipses work the same way, but are considered more influential over a longer period.

That’s why an Eclipse can still be triggered years down the road by the outer planet transits, and demonstrates the importance of what houses and planets have been impacted by past eclipses. And as I mentioned, we always have several from the past that are still at work moving things out of our lives so we can attract other things more appropriate to who we are now.

See you soon with part one on this Annular Solar Eclipse in Capricorn!

We have 2105 guests and no members online