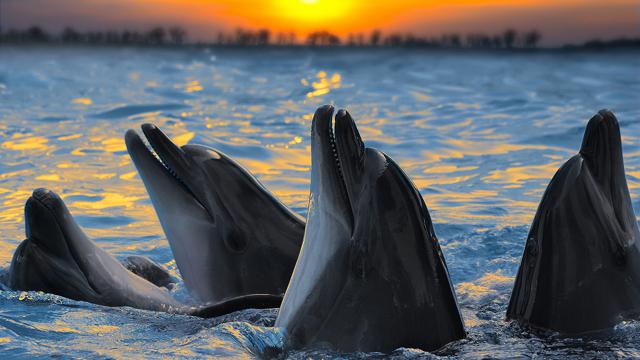 It is a well-known and widely-documented fact that dolphins possess a superior intellectrelative to most other species, in a similar fashion that humans do.  They’re incredibly smart and social creatures.  They regularly build social hierarchies, are capable of using tools, and have some sense of self-recognition when they look into mirrors.

Additionally, their vocabularies are quite extensive.  Dolphins produce a wide range of different noises with frequencies ranging up to 200 KHz, which is about ten times higher than the human ear can even hear.

Dubbed the Cetacean Hearing and Telemetry device (or, Chat) this gadget utilizes a pair of hydrophones, which are underwater microphones, to record the numerous different clicks and whistles that these creatures make when communicating.

However, instead of trying to directly translate these noises into human words, Dr. Herzing, Director of the Wild Dolphin project and creator of the device, has been trying to teach the dolphins a new, 8-word, human-defined vocabulary that that is associated with different aspects of the animals’ environment.

Recently, Herzing had a breakthrough moment with the pod of dolphins that she has been studying for the past 25 years.  One dolphin successfully used the ‘word’ that Herzing had associated with ‘sargassum’, which is a type of seaweed.

While it cannot be known whether or not the dolphin was actually trying to notify Herzing of the seaweed, and the word has only been heard one time, it can still be considered largely successful that the dolphin used the ‘word’ at all.

Dr. Herzing has plans to collaborate with an artificial intelligence expert from the Georgia Institute of Technology, Thad Starner, to further develop her translation device, hoping to one day break ground on an inter-species dictionary.

Check out the video below to learn more about Herzing’s work and dolphin vocalizations:

We have 2095 guests and no members online