Turning plastic into food? Incubator with hungry fungi can do just that 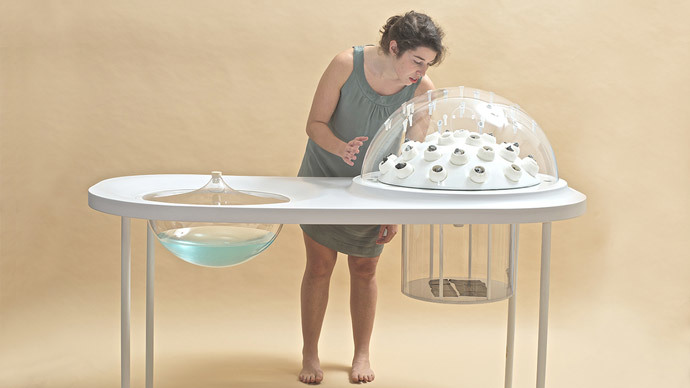 Two Austrian designers have teamed up with Utrecht University to develop an incubator dubbed the 'Fungi Mutarium.' It cultivates plastic-digesting fungi, which is edible.

Researchers at Yale University in 2012 discovered a rare variety of mushroom that could break down polyurethane, a type of plastic. What followed was a wave of research exploring how fungi can degrade plastic without retaining any of its toxicity.

Along came Katharina Unger, who thought: “What if this waste could be turned into food?” And with five trillion pieces of plastic clogging up the world’s oceans, there is no shortage of raw material.

She and her partner Julia Kaisinger set up a mini-factory, which they call the Fungi Mutarium, or the FU. It cultivates the mycelium (roots) of two strains of fungi – Schizophyllum commune and Pleurotus ostreatus. Both of these mushrooms – which are regularly eaten by people – can consume and break down plastic.

But the process isn’t as simple as it sounds. In order to be edible for the mushrooms, the plastic must first be put in an activation chamber where UV light sterilizes it.

The plastic is then put in the FU, or growth sphere, where it is placed in an oval egg-shaped pod made out of agar – a seaweed-based substitute for gelatin. If mixed with starch and sugar, agar can act as a nutrient base for the fungi.

Fungi sprouts covered in liquid nitrogen are then put into the FU, which over time digests the plastic. This takes a couple of months, but researchers are working on accelerating the process by optimizing growth conditions.

“They [the fungi] are found throughout the world and can be seen on a wide range of timbers and many other plant-based substrates virtually anywhere in Europe, Asia, the Americas and Australia. They digest toxic waste materials, and are also commonly eaten,” said Unger, as quoted by The Local.

Unger and Kasinger have eaten the fungi, and say it has a neutral flavor. However, they are thinking of developing conceptual recipes such as carrot and chocolate.