Healing our Heart: Preserving and Healing our Heart may be a uniquely different process for each person, however, the main purpose is
Clones and AI...: The human race has had our DNA manipulated, altered and split in two to change our entire
Thoughts on Time: Recently, the subject of time has… come up a lot. Notwithstanding my recent post on temporal markers, time
Misogyny: As the Solar Feminine Christ template increasingly comes online with new solar embodiment potentials, the dark resistance
Astral Larvae: What Are They And How To Protect and Eliminate Them: First of all, let me tell you that is extremely difficult for a person to contract this
How Technology Can Help Reduce Our Impact on the Planet: In recent years, our growing awareness has changed our priorities when it comes to our planet’s health.
The Meaning of Commitment: In this article we are going to examine what it is to make a commitment. While we
Metagalactic Core: Dear Ascending Family, We are living through the personal mystery of waking up to find out that earth
Magnum Opus: Ancient alchemists have written that the goal of the Great Work is to perfect any substance, creation
Blended Earth Reality: During the Ascension Cycle, those serving the Christos Mission are attempting to dismantle the distorted base 10 Artificial Tree of Life used
The Consolation of History: I have read a fair few books about history and pre-history. There’s not much logic to it,
Crystals for All Matters of the Heart: February perfumes the air with roses and draws attention to one of the most important chakras of
Many Guides and Allies...: Everybody that comes into this world has a spiritual team, back up...because entering this material world isn’t
Expansion...: Many of you have realized that we as a collective and as an individual have been monitored
Platinum Crystal: Since 2000, Platinum Indigos and those on the Christos Mission have come to the earth to anchor
Performing Your Online Identity: The internet, and social media especially, encourages us to perform. We record and perform our lives to
Parasitism: Everything in the Universe is energy in some form or another. Energy can't ever be destroyed only
What Does it Mean to be Proactive?: Let’s begin this article with a simple definition of our main term “Proactive.” Being proactive means that you make things
Time Is Speeding Up...: We all feel it we know time is speeding up and that is because the shift into
Solar Feminine Christ: Dear Ascending Family, This time is something we have been waiting for and working to embody for a
Worth and Convenience: Modern western lifestyles are underpinned by a notion of convenience. We’re told how much we want things
Self Ownership and Boundaries: Reclaiming self-ownership and clearing negative ego fear programming is the most important thing you can do to
Search - Categories
Search - Content
You are here: Home 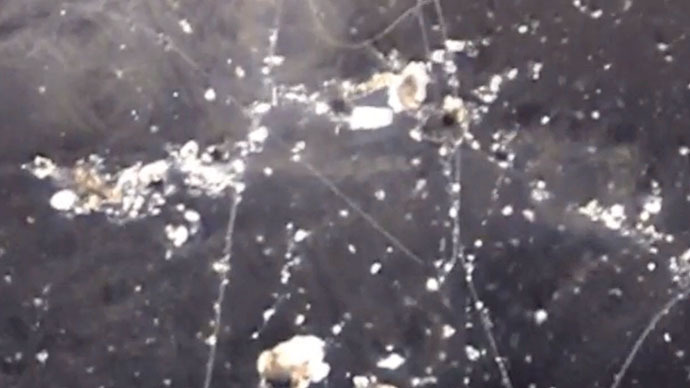 Microbiologists based in California have discovered bacteria that survive by eating pure electrons rather than food, bringing an entirely new method of existence to awareness and raising questions about possibilities for alien life.

The ‘electric bacteria’ – as they have been dubbed by the team that discovered them – take energy from rocks and metal by feasting directly on their electrons. The hair-like filaments the bacteria produce carry electrons between the cells and their environment.

The biologists from the University of Southern California (USC) found that the new discovery joins more than ten other different specific type of bacteria that also feed on electricity – although none in quite the same way.

“This is huge. What it means is that there’s a whole part of the microbial world that we don’t know about,”Kenneth Nealson of USC told New Scientist.

Nealson explained the process by which the bacteria function. “You eat sugars that have excess electrons, and you breathe in oxygen that willingly takes them,” he said. Human cells break down the sugars in order to obtain the electrons – making the bacteria that only absorb the electrons that much more efficient.

“That's the way we make all our energy and it's the same for every organism on this planet,” Nealson said.“Electrons must flow in order for energy to be gained.”

Some of the bacteria even have the ability to make ‘bio-cables’ – a kind of microbial collection of wires that can conduct electricity as well as copper – renowned for its high electrical conductivity.

Such ‘nanowires’ were first discovered in a separate study conducted by researchers at Aarhus University in Denmark. Their presence raises the possibility that one day bacteria could be used in making subsurface networks for people to use.

“Tens of thousands of bacteria can join to form a cable that can carry electrons over several centimeters,”the New Scientist video on the subject points out.

Nealson and his team discovered the bacteria by taking ocean sediment, and placing electrodes in it in the laboratory. As higher voltages were pumped into the water, the bacteria started to consume electrons from it.

When a lower voltage was pumped into the water the bacteria emitted electrons, making an electric current. The scientists carefully cut off all other possible nutrition sources for the bacteria. Nealson compared their method of survival to a human attempting to power up by sticking their finger in a DC electrical socket instead of eating.

Two of the most well-known bacteria which have ‘electrical’ properties already’ include the marine bacteria Shewanella and Geobacter – some species of which can metabolize certain collections of chemicals, producing electrons in the process, leading some scientists to theorize that a sort of natural battery could be created using it.

Last month, at the Goldschmidt geoscience conference in Sacramento, California, results were presented.

NASA has also expressed interest in the “dark energy biosphere” – microorganisms lurking beneath the seabed – because they survive on such little energy that their means of living could theoretically be used by other beings living in other areas of the solar system.

“If nothing is going to eat it or destroy it then, theoretically, we should be able to maintain that organism indefinitely,” Yuri Gorby, a microbiologist at the Rensselaer Polytechnic Institute in Troy, New York, speculated.

Whatsapp
back to top
Riding the Train of Life – Symbolism to Navigate the Tracks of Your Journey
Article One: An Understanding Of The Big Picture And The State Of Affairs In The Usa And In The World
How Our Narratives Inform Our Hopes for Change

The Creator - A Part Of All That Is

We have 1345 guests and no members online