How Would We Behave Without ‘Selves’?

Following Our Joy to Find Freedom 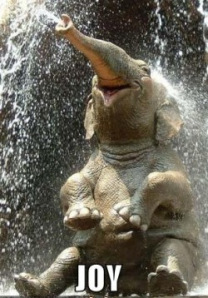 The Search for Self always takes us into greater freedom, but a lot of the time, we’re not even aware of the need for this, because the barriers and chains that hold us are the ones we’ve created ourselves over many years, without being aware of doing so. Lately, the energy seems to be all about breaking through these barriers that we have unknowingly put up in our lives – at least that’s what it’s been about for me.

You will have noticed that I haven’t written much lately. That’s not because I didn’t have anything to say, but because I couldn’t quite fathom where the new energies and the changes they were creating in me were leading me. They’ve been very subtle, making me focus on areas of my life where I needed to allow myself greater freedom, even though at the time I didn’t have a clue that this would be the result. So I suppose I’d better tell you the whole story.

To start with, I had a wonderful surprise in August, when the parents of the baby that I’ve treated for a life-threatening condition (see: Surrender to the LOVE that I AM) decided to come down so that I could meet their baby. She had been too ill to have the life-saving operation she needed, until my herbal and healing treatments quickly improved her health and she was finally well enough to havethe operation. Once she was out of danger and had recovered, her parents brought her all the way down from the north of England so that I could meet her. Can you imagine the joy, satisfaction and gratitude I felt when I first held her in my arms? It was so wonderful to meet this little girl and see how well she is now. As the icing on the cake, as soon as I met her parents, I knew that they were soul family. There was an instant connection between us that we all recognised as family. Two weeks ago, it was their little girl’s first birthday and acting on impulse, I made the six hour journey up north to stay with them for the weekend. I felt such joy celebrating her birthday with them and sharing their happiness in reaching a milestone they’d feared they might never reach.

I used to be very impulsive as a child and always acted on my feelings. Looking back, I realised that impulsivity was never encouraged in the society we grew up in and I hadn’t allowed myself that kind of freedom for years – and I wasn’t even aware of it! It just shows how ingrained it is in us to always rationalise every move before we make it. And yet, if ‘following your heart’ isn’t about being impulsive and acting on your feelings, then what is it about?This realisation made me wonder how many opportunities for happiness I must have missed over the years. Not that I’ll be sitting here pondering on it however, as I’ve left all of that behind. It just made me realise how foolish I had been – until now. Since it dawned on me that being impulsive is good for me and is a way to become fully authentic and true to myself at all times, I’ve felt free like never before. It’s as if I’ve allowed myself to be a child again, without a care in the world.

Next, I cancelled a life insurance policy. The insurance company sent me a letter to tell me that its value had gone down due to fluctuations in the financial market and, not being a believer in insurance anyway – I feel it’s just a way to make us pay for our own fears – I cancelled it. The only reason I had taken it out years ago, was so that my children wouldn’t have to pay for my funeral, which is no longer something I worry about. So as I would be getting a – for me – quite substantial cheque, it made me think about what I’d like to do with it and the first thing that came to mind was a holiday. I haven’t had a far away holiday since I was eleven, when my mum took my sister and me to the States, so you can imagine the excitement I felt. I’ve always dreamed of travelling, but as I never had enough money as a single mother with a family to support, I’ve never managed to do it. Up until a couple of months ago, I wouldn’t have even considered spending the money on a holiday for myself, as I would have felt it was selfish and extravagant, but now…… I’ve decided to ‘follow my Joy’ and realise my dream!

So I booked the holiday of a lifetime to Thailand – paradise! As I’ve said before, Freedom is something only you can give yourself, and this to me is FREEDOM like I’ve not felt since I was a child!

14 Truths About Being an Introvert (That Mainly Introverts Will Understand)
There is something extraordinary happening in the world
Resonance: Aligning To A New Vibrational Field