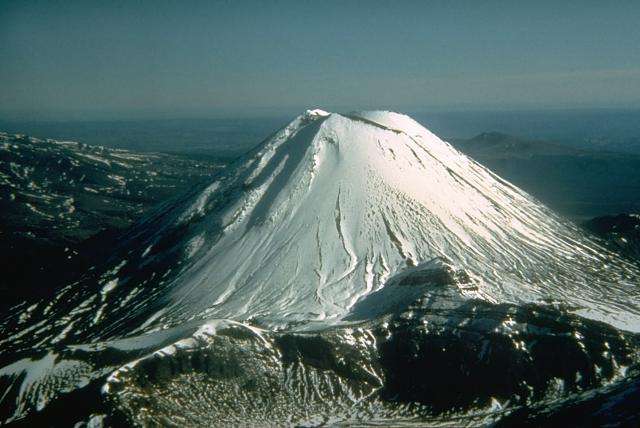 A small team of researchers with members from institutions in the U.S. and New Zealand has found that there are large deposits of gold and silver in at least six reservoirs beneath several volcanoes in New Zealand. In their paper published in the journal Geothermics, the team describes their investigation into geothermal systems in the V-shaped Taupo Volcanic Zone on New Zealand's North Island and just how much of the precious metal they believe is hiding down there.

As part of their study, the team found that magma heating water in the volcanic zone had been breaking down rocks for quite some time, releasing the gold and silver in them. Those metal particles then fell to the floor of reservoirs that are hundreds of meters deep. The natural process is similar to the way modern precious metals are obtained—lode bearing rock is crushed and then sifted using water—the heavier metals land at the bottom where they are retrieved. In their studies, the team found examples of gold at over 20 parts per billion, and silver at 2,000 ppb.

The team believes the precious metals could be mined, yielding perhaps nearly three billion dollars worth of gold and three and a half billion in silver annually. Of course, companies hoping to take advantage of the find would have several hurdles to jump—new technology would have to be developed to get at the source (the research group suggests it would likely entail a two-phase pipeline that would allow for capturing the metals as the accumulate, rather than digging in the sediment to retrieve what has already fallen) and agreements would have to be made with others already tapping into the heated water—they use it as a geothermal energy source.

It has been known for some time that precious metals were embedded in subsurface rocks in the area, but in concentrations too low to make mining worthwhile. Testing samples below using hole sampling revealed much higher concentrations in deposits at the bottom of the reservoirs. The team noted that testing at two sites, Rotokawa and Mokai revealed even high concentrations, suggesting production of 680 to 7,500 kg of gold a year might be possible.

Earlier investigations show that some geothermal systems of the Taupo Volcanic Zone are sites of precious metal transport and deposition. Gold and silver precipitate in hot springs, in subsurface hydrothermally altered rocks, and in two-phase pipelines associated with production wells, as a result of gas loss due to flashing and adsorption on to As and Sb-rich sulfur phases. The amounts of Au deposited in subsurface rocks may exceed several hundred thousand ounces, but the concentrations appear to be very low grade (<1 ppm Au). High-grade deposits are forming in hot springs, containing >500 ppm Au and >700 ppm Ag, but small metal inventories (<10,000 oz Au) and very high conservation value eliminate these sites as potential resources.

New technologies need to be developed to extract the metals from the flow stream of production wells without interfering with geothermal energy production for continued metal extraction to be feasible. The alternative is to let precious metals accumulate in two-phase pipelines, to be recovered in intervals, when practical for steam field operations and optimal in terms of profitability.

back to top
Your Angry Voice Demolishes Your Brilliant Argument
Is Being An Entrepreneur Right For You?
Trust and Joy

We have 1863 guests and no members online