Not All Have Halos 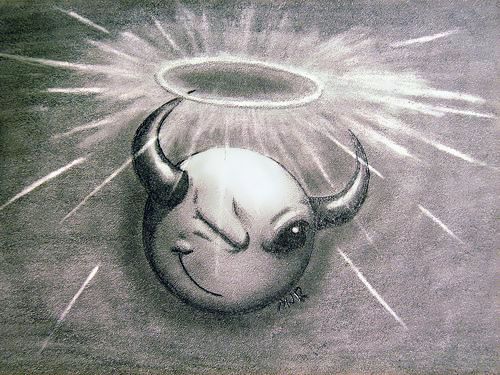 Most of us want to believe that we have invisible guidance and even intervention to help us get through the many perils of life. As children, we often play with imaginary friends as well as depend on a relative, Mom, Dad, Grandma, and Grandpa, to catch us when we stumble or tell us what to do so that we are safe and secure. As adults we continue to seek that guidance which may account for the popularity of the belief in guardian angels. Occasionally, we even adopt a deceased relative who protected us as a child as our guardian angel.

The movies and television has certainly supported this desire and belief. The popularity of classic old movies like The Bishop's Wife or It's a Wonderful Life verifies our desire to believe in super natural assistance or guardian angels. The fact that Touched By An Angel is a popular television show, demonstrates our desire to believe that we all have a guardian angel especially active when life gets turbulent. But do all our guardian angels have wings and halos. The answer to this question came when as a therapist and spiritual counselor, I was working with a twenty-one year old client named, Rebecca.

Rebecca came to me wanting guidance in her relationships, none of which to her were fulfilling. She thought that if she lost a lot of weight she would find her true love. She had decided to go on a radical weight lose program using a now illegal pill. She insisted that if she lost the weight she would not be fat and ugly and her life would be better. I talked to her about loving herself and tried to convince her to use a healthier method for weight reduction.

As we started talking about her physical health, Rebecca told me that she was having chest pains and at times had a difficult time breathing, although her doctors had found no physical cause for these symptoms. She, then in a matter of fact way, announced that she thought she was going to die when she was twenty-three. It upset me that someone so young and bright would have such a fatalistic outlook on life. After helping her to relax through some breathing exercises, the following dialogue took place.

Claudette: Rebecca, you have a long and full life ahead of you. Why do you feel you are going to die at age twenty-three?
Rebecca: I just know. It will probably be in a car accident.
No matter what I said, she would not alter her notion.
Claudette: (In a stronger than normal voice) Rebecca, you are NOT going to die at twenty-three.
Her eyes glazed over and in a high pitched voice with a slight southern accent, which was not her normal voice, she looked at me and said.
Rebecca: Yes she will. She doesn't deserve to live. She's fat and ugly.
Claudette: Who is this speaking?
Rebecca: I'm Julie Ann.
Claudette: Julie Ann, tell me about yourself. How old are you? Where are you from?
Julie Ann through Rebecca: I'm twenty-three and I'm from the Tulane University area in New Orleans.
As she talked I started to see an image behind Rebecca take a human form. The more she talked the clearer the image became. She appeared to me as a very attractive, petite blond who was dressed very stylishly.
Claudette: Julie Ann, do you know you are dead?
Julie Ann through Rebecca: I'm NOT dead. I was only hurt when my boy friend's car went out of control on the wet streets. My chest was crushed and I couldn't breath, but I'm not dead. The paramedics revived me. This fat, ugly girl is in my way.

Apparently, when Rebecca's soul left her body to transcend into the next dimension, she was confused and frightened and as a result her soul lingered in the general vicinity of the accident. At a later time, when Rebecca was in that area, also partying, Julie Ann attached to her energy in an attempt to regain her life.

I had been doing some work and study in this area of soul attachments, so I had some conception of how to proceed. As I asked for divine guidance, I saw two very bright lights surround Julie Ann. I asked these bright lights to help Julie Ann find peace in the Light. At that moment Rebecca's body started to shake uncontrollably and enormous tears flowed from her eyes. It was obvious to me that Julie Ann was not going to depart from this plane without a fight. At that point I saw a distant bright light, start to come closer. When it was alongside Julie Ann I could see it was an old lady. Julie Ann called her Grandmother. Grandmother talked to her granddaughter and persuaded her to walk into the Light with her. I watched the two of them, escorted by the two bright lights until they faded from my inter dimensional sight. Rebecca almost immediately calmed down and her crying was replaced with a smile. In fact her eyes showed no indication that she had cried at all .

Claudette: How do you feel, Rebecca?
Rebecca: I feel lighter. My chest doesn't hurt any more.
Claudette: Do you still feel as though you are going to die at twenty-three?
Rebecca: No, I feel much lighter and happier, but I still want to lose weight.

I have discovered that there seems to be numerous reasons for these souls who leave the living to become lost. For example one of my clients had her grandmother attached to her. When I told the grandmother she was dead, she emphatically told me that she was not because if she were dead, St. Peter would have met her at the pearly gates. In this case Grandma's minister came from the Light to clarify her "old time religion" dogma. After wards, she willingly walked with him into the Light.

Another client was free of a chronic neck ache when an attached soul who had been hung in the 1870's was sent to the Light. Yet, another lady declared by her doctors as having terminal liver cancer was found free of any cancer cells (verified by her doctor who couldn't explain it) two days after detaching a number of her dead relatives who had died of liver disorders. I could fill a book with similar detachment cases, which resulted in miraculous healing for the living and peace for the dead.

Through my work I have come to understand that until we go into the Light, we keep some of our physical characteristics including any pain felt at the time of death. It appears that if a soul is caught between dimensions it loses sight of the beacon, bright light that so many near death experiences describe. The soul then becomes lost in that in-between dimension. I have seen this beacon and the bright path to it and yes; it does resemble a tunnel.

One of the most debated questions of the ages is where do we go when we die. This unknown is probably the root of all our human fears. Even though I knew I had the ability to see into that other dimension between life and death, I really never understood before the immense influence these "lost" souls could have on the living. Dealing with all of these "lost" souls have caused me to ask the question, why do some souls find the path to the Light and others do not? I have concluded that confusion and fear are the primary causes that they do not.

In probably fifty percent of the clients, who I have helped to detach a "lost" soul, the attached soul is a loved one or family member. For this reason I am always suspicious when a client says a close deceased relative is their guardian angel. In some of these cases the living either through excess love or hate has kept the deceased soul trapped in that in-between dimension with their excessive emotional attachment. This condition could be called a co-dependent relationship on an inter dimensional level. Since in these cases it is the living that is keeping the deceased earth bond, the release must be initiated by the living. For full detachment, the client must be persuaded that unconditional love is letting go.

Believing in preventative procedures, I wanted to know what could we living beings do to assure transition into the Light for our loved ones and ourselves. The conclusions at which I have arrived is that we need to dispel of as many fears as possible, especially the fear of death or more specifically the fear of the unknown of where we go when we die. Another preventative step is to heighten our awareness so as to be able to discriminate between the "angels with halos" and those poor souls who are lost in-between two worlds.

It seems the greatest block to this awareness is the belief that we automatically grow wings and halos when we die. As the teachers in many religious books tell us, we simply leave our houses (our bodies) when we die. The spirit or soul (the essence of who we really are) no matter how evolved moves into another dimension for further learning or soul development. If this concept is accepted while we are living, we will not have the tendency to hang onto our houses or bodies when we die. Our essence will then make the gentle transition into the Light.

Some of the symptoms I have found to be present in most people with an attached entity or "an angel without a halo" is the following:

Probably everyone, occasionally, encounters some of these symptoms, but if you experience fifty percent or more of them, this would certainly warrant investigating the possibility of an attached entity.

My hope is that one day we will broaden our viewpoints and open our minds in order to allow room for possibilities other than what can only be proved by science or accepted by religion. Only then will we not be afraid to die and therefore; we will not be afraid to live.

Claudette Cleveland is a teacher, counselor, author of fiction and non-fiction books and a professional artist. For more information about Claudette's articles and books go to her website ClaudetteCleveland.com and http://www.strategicpublishinggroup.com/title/BeneathandBeyond.html

Whatsapp
back to top
Darwin's Fox: Rare Photo Reveals Of One Of The Most Elusive Carnivores On Earth
What Returning Your Shopping Cart Says About Your Personality
The Green Pauper

We have 1181 guests and no members online