Self Honesty May Deepen the Bliss Into Actualization and Full Embodiment 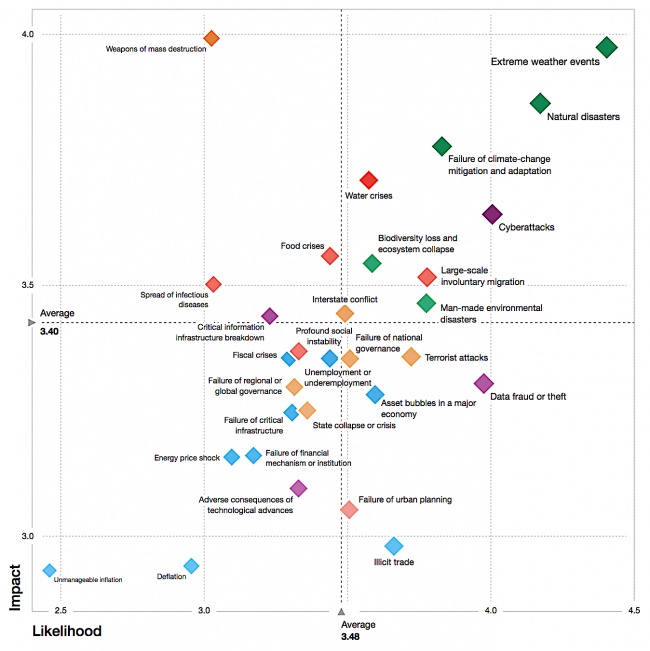 Every year, an organization called the Global Risk Forum presents the corporate and political elite attending the Davos World Economic Forum conference with a snapshot of their assessment of the greatest risks this elite and its vested interests should be aware of. This is all about risk mitigation (ie avoiding anything that would dampen profits or impede re-election). But they pretend they also care about the welfare of the world’s people, and spend millions of dollars (kindly provided by you in the form of customer profits and taxes) preparing this report.

The full report (PDF) is here, and it’s worth a look. It tells you some things about the thinking and the (arrogant, naive, ignorant, mistaken) beliefs of the rich and powerful: notably that ‘they’ the leaders can control these risks, and that there are relatively simple ‘solutions’ to these (and other, unmentioned) complex predicaments facing our crumbling industrial civilization culture and our ravaged and desolated planet. They demonstrate that they are utterly short-term focused (their assessment of risks’ likelihood and impact varies enormously from year to year, largely based on the past year’s headlines).

Nevertheless, though the list of risks is far from complete, it is worth considering from a local community preparedness and adaptation perspective. We know we can’t control or prevent these crises, but it’s helpful to know what we might be facing, when, and to what degree.

It is interesting to note what has appeared on the list of risks in past, but has dropped off the radar in these ‘experts’ minds more recently.

At one point, the explosion in the incidence of chronic diseases (as distinct from infectious diseases, which are still on the list) was high on the chart, mainly because it was realized that this is leading to the inevitable bankruptcy of public health systems worldwide — if the cost of medical care, pharmaceuticals, and end of life care continue to skyrocket, and the incidence of chronic illness also continues to soar (and there is no evidence to indicate these trends won’t continue), there will soon be insufficient money, no matter how much premiums increase, to pay for the staggering costs of our increasingly global Civilization Diseases.

So why aren’t chronic diseases on the list anymore? My guess would be that leaders, such as the attendees at Davos, have been sufficiently successful in their PR propaganda campaign to convince the rest of the population that their illness, and their poverty (and hence inability to pay for even minimal chronic health care) is somehow their own fault. If the population doesn’t expect the powers that be to address the problem or pay for chronic disease related health care, and if, soon, only the elite will be able to afford it, then the elite can wash their hands of it. If fixing it isn’t profitable or essential to political success, then, to the Davos gnomes, it simply isn’t a problem.

Marine disasters are also notably absent from the list. It will take another Shell or Exxon disaster to get this, and the larger issue of the utter befouling of marine systems worldwide and its effect on marine life (including seafood we eat), back on the list. But it won’t stay on there long. There is no money to be made in saving our oceans (except for the ironic spike in GDP when massive cleanups are needed after major corporate disasters), and the peasants can always be told to eat farmed fish.

Biodiversity loss and ecosystem collapse are on the map, but they’re only in the middle of the chart, despite the obvious fact that human survival is utterly dependent on biodiversity and healthy ecosystems. Why is the impact of this ongoing disaster not at the very top of the map? Because there’s no human solution to it, and no profits to be made fixing it. So, psychologically, it’s better to downplay its likelihood (which is already occurring, ie 100%) and its impact (catastrophic, even just considering the effects of the destruction of forests, oceans, soils and permafrost, which are already well-advanced and accelerating).

The “spread of infectious diseases”, in the middle left of the map, would seem to be the newest toned-down euphemism for pandemics, which were also once higher on the list, in the years after SARS. Absolutely nothing has changed since SARS, other than slightly better monitoring. A pandemic caused by either wilful weaponizing of diseases (so-called bioterrorism), or more likely the mutation of a potent disease like the influenza virus to become airborne and immune to known antivirals and antibiotics, would be far more catastrophic than anything else on the map, and it could happen very quickly. Why isn’t it rated higher? Again, because there are no answers and no profits to be made, so better to deny it’s a serious risk.

Our colossally bone-headed short-term thinking is also revealed in the demotion of peak oil (“energy price shock”) to a low-likelihood, low-impact risk. As I have explained often on these pages, the issue isn’t the availability of oil, or its (hugely fluctuating and artificially suppressed) price, it’s the availability of affordable oil (and other hydrocarbons). And many others have repeatedly smashed the myth that (even massively subsidized) renewable energy can replace more than a small percentage of hydrocarbon energy. But we’re desperate to believe that cheap oil won’t run out until we have “environmentally friendly” renewable energy available in abundance. So since the Davos gnomes have largely created our dependence on cheap hydrocarbons, who are they to tell us otherwise?

Apparently in Davos, technology is still our friend. Despite the lessons of history, risks related to technology, other than cyberattacks and data theft, are rated low. The innocuously named “adverse consequences of technological advances” barely makes the map at all. Really?

I could say much more about the weaselly logic and political expediency evident in the map, but enough ranting. The report, flawed as it is, makes fascinating reading, and is almost as educational and thought-provoking (eg some of the new risks) as it is infuriating. We could do worse than borrow the methodology and create our own maps of the realrisks we need to be monitoring and preparing for.

The report has a second interesting map, reproduced below, which attempts to show the major interconnectionsbetween the various risks. 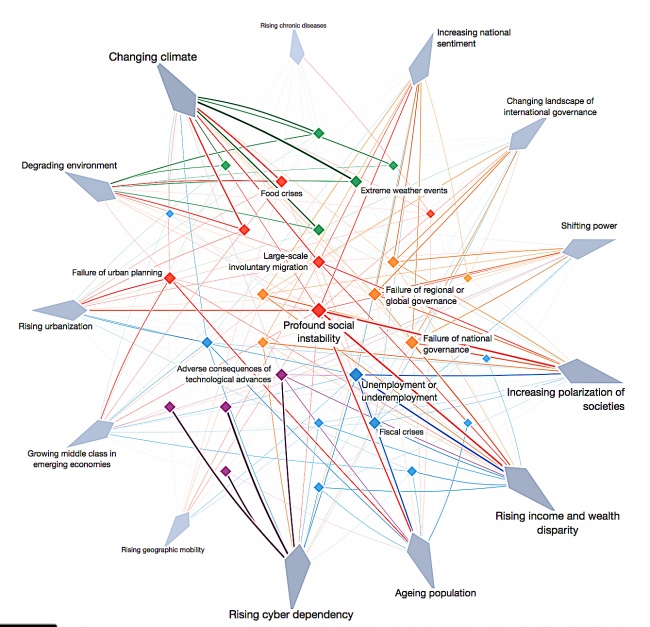 Intriguingly, “rising chronic diseases” (faintly) make this second chart, though the associated risks identified with this trend are inexplicable. The main risks that are associated with this crisis are poor nutrition (ie our toxic, perfidious industrial food system) and stressful, low-exercise lifestyle (ie people having to work too long and hard in horrific, exhausting, soul-destroying jobs). But you’re not going to see these risks on the Davos map. Don’t want to bite the hand that feeds us.

You know what I’m getting at, of course. There is one underlying cause/risk for just about every dot on the Davos risk map: Untrammelled industrial capitalism. It is the very system that the business and political elite gathered in Davos have so carefully built up and defended, that is the ultimate risk to all of us. Will we ever see an admission of that, from these supposedly brilliant intellectual minds?

Don’t count on it.

back to top
Once Upon A Time, A Long Time Ago in the 1960s, We All Had A Dream
Journey to the Enchanted Forest – Your New Moon & New Year Power Animal Awaits
If We Create Our Own Reality, Then Why Do We Get Old?

We have 2009 guests and no members online