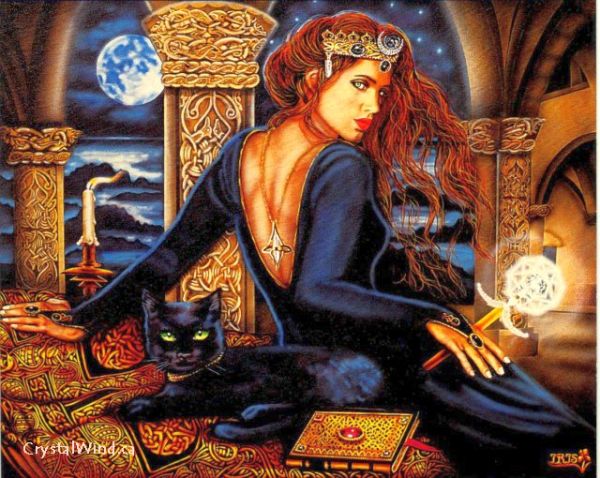 The Witch is a catalyst and barometer of social change.

Once, Witch was a five-letter death sentence. Now it’s an aesthetic, a TikTok subgenre, a state of being or a public persona. The Witch is a synergy of myth, history and spirituality that beckons to us every Fall, like the urge to ramble through fallen leaves or sing to the Moon. This article is simply a preamble to your own memories and opinions. Perspectives may vary. Please excuse the many oversights and omissions (wordcount!). The female gendering of Witch is not intended as a slight to male witches.

The Witch is like Lilith, Adam’s first wife who preceded Eve. She was the first to be banished from the Garden – that haven of acceptance and security granted to other, more compliant women. The Witch, like Lilith, is an essential yet alternative creation. She summons the shadows from beneath the surface – the energies that both disrupt and heal. Living outside social norms, she IS the storm.

Apart from Halloween caricatures, my first exposure to the Witch was the actress Barbara Steele in Hammer Films on late Fright Night TV. These witch-centric movies were camp and quintessentially British. Leveling curses at her persecutors, the Witch aroused desire and condemnation. She was an erotic agent of doom, luring decent men to their fate, such as Brit Ekland in The Wicker Man (1973). (A trope recalling Morgan le Fey, who began as a benevolent Goddess but is vilified as the witch who seduced her half-brother King Arthur and conspired to destroy Camelot). The Love Witch (2016) is a stylish send-up of films from that era.

Why were Witch movies popular? Like the celebrations after Prohibition was repealed, Britain was enthused when witchcraft was decriminalized in 1951. Canada took 66 years to catch up! The sigh of relief and renewed fascination was understandable, given that a dark page in history had been turned. The most recent case of witch imprisonment had been 1944! (Helen Duncan served 9 months for divining the sinking of the HMS Barham, which was censored wartime information. She was visited in prison by Sir Winston Churchill, who denounced her conviction).

With the Witchcraft Law repealed, the controversial Gerald Gardner put the finishing touches on his version of Wicca. His more sensation coven practices did little to disabuse the general public of past stereotypes. The 60’s were Alex Sander’s turn to be the self-proclaimed King of the Witches, promoting his version of Alexandrian Witchcraft to the British media. The sex, drugs and rock ‘n roll zeitgeist of the late 60’s/70’s, exemplified by Led Zeppelin’s Crowley-inspired occultism, kept the Witch dominated by the male gaze.

If you were seeking a role model more nuanced than a Temptress or a Hag from Macbeth, authors such as Janet Farrar, Doreen Valiente and Sybil Leek introduced a more relatable Witch. Portrayed as a seer, teacher, healer and midwife, the Witch revived an interest in British folklore, herbalism, mythology and magic in daily life. Distinctions between Wicca and Neopaganism were being made, creating room for  other traditions, such as Ferie, Stregheria and Dianic. The British Rider-Waite Tarot was published in the U.S. (1970) and the future was in our hands.

A thread of eccentricity ran throughout the early days of the Wiccan/Pagan revival. Sincere and scholarly research sought to recreate tenets and practices, but as in any syncretic belief system, there was an element of making it up as you go along. A balance was struck between vital experience and aspects of reenactment, believed to bestow authenticity. The Gardnerian and Alexandrian Coven’s emphasis on ceremony, rank and degree, indicates the extent that hierarchy, (i.e., peerage and the social class system) was imprinted on the British psyche. As an independent alternative to the coven’s group ceremonial form of magic, the Solitary practitioner emerged. The needs of the independent Witch created a book genre, typified by Llewellyn Worldwide’s publications, based in Portland, Oregon, U.S.A.

Out of The Broom Closet, Into the Streets!

Was there a difference between the North American Witch and their British counterparts? The Salem Witch Trials were American’s unique incident to live down. An unsettling dissonance exists between Salem’s history and its upbeat, commercialized atmosphere. Is the Witch acceptable only when she’s good for business, or is Salem’s witch tourism a civic celebration of Never Again?

The Salem Witch Trials were fictionalized in Arthur Miller’s play The Crucible (1953) in response to The Red Scare, McCarthyism and the House of Un-American Activities Committee. Now, the Witch stood for any group vilified to advance an agenda by means of engineered mass hysteria. Representing the importance of a just and free society, the cottage witch of olden tymes morphed into the urban activist.

Under the aegis of The Women’s Liberation Movement (1960-1970’s) the Witch symbolized woman’s relationship with power. Identifying with the Witch meant solidarity with the exploited and oppressed. This reached critical mass with the founding of W.I.T.C.H. (Women’s International Conspiracy from Hell). This acronym changed with the issues (i.e., Women Inspired to Tell Their Collective History or Women Infuriated at Taking Care of Hoodlums). Their signature style were events, such as hexing Wall Street, in full-on Halloween drag. This spirit survives through groups like the Yerbamala Collective, who made the news for their response to Trump’s inauguration.

Goddesses In Every Woman

In addition to political engagement, the Witch was dedicated to reclaiming the Divine Feminine. This movement brought together Wicca, Neopaganism, New Age, Women’s Studies and Feminist Theology. It was a shared realization that Goddess had been intentionally obliterated by patriarchal institutions.

In the 1970’s, the Gaia hypothesis, named after the Greek Goddess, proposed that our planet was a singular, self-regulating organism. Books like When God was a Woman (1976) by Merlin Stone, enabled women to accept the mantle of oracle, priestess, conservators of wisdom, warriors and protectors of Gaia. Archeologist Marija Gimbutas proposed that a far-reaching Goddess culture unified the Neolithic world. These influences inspired many expressions of earth-based spirituality. The Spiral Dance (1979) by Starhawk and Drawing Down the Moon by Margot Adler (1979) were guidebooks for Ecofeminism and Eco-Witches. Goddesses in Everywoman (1984) by Jean Shinoda Bolen, analyzed Goddesses as living psychological archetypes. Those who identified with Hecate, the Greek Goddess of Witches, would be recognized as those who serve in the fields of shadow work, trauma healing and the paranormal: the dominion of She Who Stands at the Crossroads.

One example of earth-witch activism that continues today is The Reclaiming Collective, which is Bay Area based with worldwide groups. Reclaiming organizes classes and public rituals such as Solstice celebrations, Samhain spiral dances, labyrinth walking, drumming circles, colourful protests and parades. Mainstream offshoots of the Green Goddess include the popularity of Farmer’s Markets and the avoidance of pesticides, genetically modified foods and the support of animal rights. Permaculture and off grid Tiny House living harkens back to the herb collecting witch and the original meaning of Pagan – one who lives outside of town. Many millennials embrace a “plants, not things” aesthetic, turning their apartments into trendy urban jungles.

Next month: The awesome 90’s and the hereditary, woke and social media Witch!

We have 815 guests and no members online