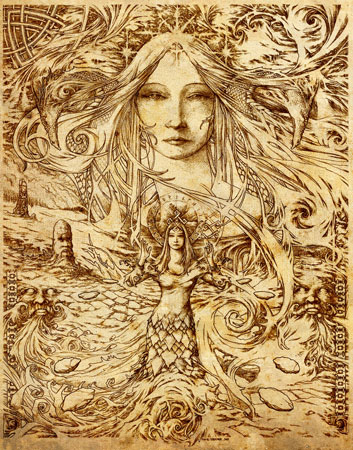 Njord is of the race of Vanir and is the father of Freyr and Freyja. He is the god of the sea. He calms storms, aids ships in distress, and causes favorable winds to blow. As with the other Vanir, Njord is a fertility god, capable of providing good fortune in the form of safe sea voyages, wealth, and land.

When hostages were exchanged at the end of the war between the Æsir and the Vanir, Njord and his two children came to live in Ásgard with the Æsir. The mother of Freyr and Freyja was probably Nerthus, Njord's sister. Æsir disapproval of such practices prevented her from coming to Æsir with the rest of the family. Later, Njord married a second time. Snorri Sturluson tells the story in Skáldskaparmál.

When Tjazi, the giant who kidnapped Idun, did not return home after giving chase to Idun and her rescuer Loki, Tjazi's daughter Skadi began to worry for his safety. Soon, she realized that he must be dead. Swearing vengeance, she took up her father's arms and traveled to Ásgard.

Heimdall saw her approach and sounded a warning. Several of the gods went out to meet her. Having no wish to prolong the feud, the gods asked if she would accept wergild (gold as payment for her father's death).

Skadi said she would settle instead for a husband of her choice from amongst the gods. The gods agreed, provided that Skadi chose her husband by looking only at his feet. 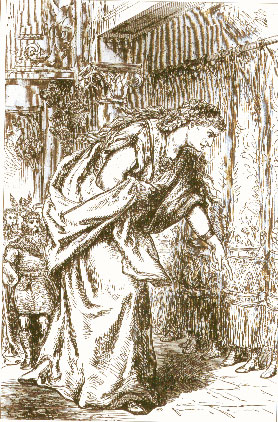 Skadi agreed, and Ódin arranged for all the gods to gather. With Skadi's eyes shielded so that she could see only the gods' feet, she made her choice. She chose the most shapely feet, thinking they were Baldr's, the most handsome of the gods.

To her horror, the god that stood to meet his bride was not Baldr, but Njord. His skin was weathered from his long time at sea, and he smelled of salt.

The second part of the bargain was for the gods to make Skadi laugh, something she thought they would be unable to do. Ódin called for Loki to make the woman laugh. Loki began to tell a tale of taking a goat to market. He tied one end of a thong to a goat's beard and the other end to his own testicles. The ensuing tug of war caused Skadi to laugh in spite of herself.

Ódin decided to please Skadi further. He brought forth two liquid orbs, which Skadi recognized as her dead father's eyes. Ódin threw them up into the sky, where they became two stars. 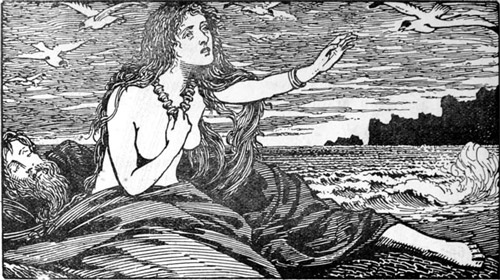