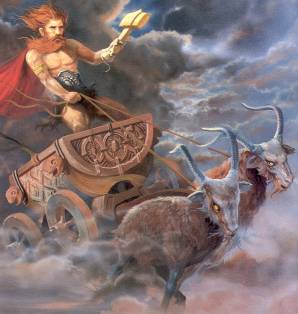 from the Poetic Edda

Thor was distraught when upon awakening one morning he discovered that his mighty hammer Mjölnir was missing. His shaggy head and his beard quivered as he, the first-born of Mother-Earth reached around for it.

His first words were: "Loki, listen to me! I have suffered a loss beyond perception. My hammer has been stolen!"

They hurried to Freyja's home, and he said: "Freyja, will you lend me your feather-robe so that I can find and retrieve my hammer?"

Freyja said: "I would give it to you, even if it were made of gold or silver."

Loki then flew, with whirring feathers, from the home of the Æsir to the land of the giants.

Thrym, the King of the Thurse, [The Thurse were a race of giants] was sitting on a mound, pleating golden halters for his hounds and smoothing the manes of his mares.

Thrym said: "How are the Æsir, and how are the alfs, and what brings you to the land of the giants?"

Loki said: "It's not well with the Æsir, nor with the alfs. Are you the one who hid Thor's hammer?"

Thrym said: "Yes, I hid Thor's hammer a full eight leagues beneath the ground. And no one can get it from me unless he brings Freyja here to be my bride."

Loki then flew, with whirring feathers, from the home of the giants to the land of the Æsir. Thor met him in the central courtyard, and he said:

What good news do you have to report? Have your efforts been rewarded? Tell me, even before you light, what you have learned. A sitting person is often forgetful, and a lying person lies. [The play on the two meanings of "to lie" also exists in the original]

Loki said: "My efforts have been rewarded. Thrym, the King of the Thurse, has your hammer. But no one can get it from him unless he brings him Freyja to be his bride."

They hurried to Freyja's home, and Thor said: "Freyja, dress yourself in bridal linen! The two of us are going to the land of the giants."

All the gods and goddesses of the Æsir hurriedly assembled at the Thing to discuss how they might retrieve Thor's hammer.

Heimdall, the fairest of the gods and one of the prophetic Vanir, foretold the future:

"We shall dress Thor in bridal linen, and adorn him with the necklace of the Brisings. Let him wear a woman's clothes with a bundle of housewife's keys dangling about him and with bridal jewels at his breast and on his head."

Thor, the mighty god, said, "the Æsir will call me cowardly and womanish if I allow myself to be dressed in bridal linen."

Then Loki, the son of Laufey, said: "Save your words, Thor. The giants will soon take over Asgard if you do not retrieve your hammer from them."

So they dressed Thor in women's clothes and bridal linen and adorned him with the necklace of the Brisings, with a bundle of housewife's keys dangling about him and with bridal jewels at his breast and on his head.

Then Loki, the son of Laufey, said: "I will be your servant girl, and the two of us will go to the land of the giants."

The goats were driven home and tied with ropes to run with them. The mountains burst and the earth broke into flames as the son of Odin rode to the land of the giants.

Then Thrym, the King of the Thurse, said: "Stand up, you giants, and cover the benches! Bring me Freyja, the daughter of Njörd from Noatun, to be my wife!"

In my yard I have cows with golden horns, pure black oxen, everything a giant could want; I have riches and treasures; Freyja alone is all that I lack.

That evening they brought ale to the giant's table, and Sif's husband ate an entire ox, eight salmon, and all the baked goods that they brought for the women, and then he drank three measures of mead.

The maiden quickly responded to the giant's words: "Freyja was so eagerly awaiting the land of giants that she ate nothing for eight full nights!"

He peeked beneath her veil, wanting to kiss her, but then jumped to the back of the hall with a single bound. "Why are Freyja's eyes so terrifying? They seem to be aglow with fire!"

The maiden quickly responded to the giant's words: "Freyja was so eagerly awaiting the land of giants that she did not sleep for eight full nights."

The giant's poor sister entered and begged for a bridal gift: "If you want my friendship and love, then please give me those red-gold rings from your arm."

Then Thrym, the King of the Thurse, said, "Bring the hammer so that we may consecrate the bride. Lay Mjölnir in her lap, from the hand of Vár [Vár is a goddess who hears and enforces oaths and contracts], and let us be consecrated as a pair.

Hlórithi's [Hlórithi is another name for Thor] heart laughed within him when he saw his hammer. First he struck down Thrym, the King of the Thurse, and then he slew all the giant's kin.

He also killed the giant's poor sister who had begged for a bridal gift. Instead of shillings she received blows and instead of rings, a hammer hit. And thus Odin's son retrieved his hammer.

We have 917 guests and no members online