Aries New Moon: Fearless Beginnings!
A+ A A- 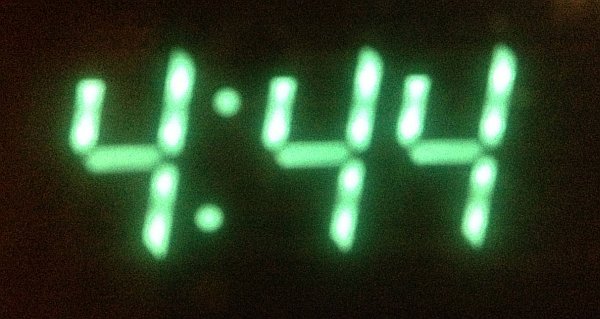 Since it has become more than uncanny how many times and at such poignant moments the “4 energy” keeps showing up for me the last several months (and increasing by the hour), I thought I’d delve into more than the simple meanings and symbolism I already was aware of for this number vibration and repetitive message, and see what else it reveals. Rather than just keep the information to myself, I thought it might be fun and perhaps synchronous for others to read some of this “just in case” you, too, have been experiencing this phenomena in your life – as it does always seem to be that our collective experiences are aligned.

While I also see many other repetitive number pattern sequences, like 1′s, 2′s, 3′s, and 5′s, the 4′s have been very, very poignant and increasingly multiplying more than any other recently. I can’t begin to tell you all the unusual, interesting, synchronous, and miraculous ways repeating 4′s show up in clocks that don’t work, exact moments of thoughts and major experiences, as well as $ amounts on pivotal things/timing that herald a marker of support in beautiful and expansive ways – all feeling like a green light of being on path. I am thankful beyond words for the support, which is received in heart-full embrace and loving gratitude.

Needless to say, I find the “4″ symbolism to be very accurate and reflective of things for me energetically in my life at this time based on my focuses, resonation, where I feel drawn, and what I am experiencing supportively. Below you’ll find some insights into the meaning behind the number 4 and the messages linked to seeing it repetitively from various sources. Happy number fun to you!

Four: The symbolic meaning of number Four deals with stability and invokes the grounded nature of all things. Consider the four seasons, four directions, four elements all these amazingly powerful essences wrapped up in the nice square package of Four. Fours represent solidity, calmness, and home. A recurrence of Four in your life may signify the need to get back to your roots, center yourself, or even “plant” yourself. Fours also indicate a need for persistence and endurance.

Numbers and Their Meanings

Four is the 4th dimension = time which is illusion.
Four is seen as the first solid number. Spatial in scheme or order in manifestation.
Static as opposed to the circular and the dynamic
Wholeness; totality; completion; solid
Earth; order
Rational – relativity and justice
Symbol of measurement
Foundation

There are four sides to a square; four arms to a cross. There are four rivers to Paradise, that formed a cross (the Garden of Eden was said to be within the four rivers). Within Paradise were four infernal regions, seas, and sacred mountains. There are four watches of the night and day, quarters of the moon. There are four quarters to the earth. There are four tetramorphs. The Divine Quaternity is in direct contrast to the Trinity. Four is a symbolic number used throughout in the Old Testament. The quaternary can be depicted as the quatrefoil as well as the square and the cross.

Native American: As in other cultures, ceremonies and ritual acts are repeated in fours. The Native Amercican cultures have used the number 4 most frequently as in the four cardinal directions. The four winds are depicted by the symbol of the cross and by the symbol of the swastika. The swastika as some misbelieve was not created by Hitler. It was instead borrowed from the Native American and occult beliefs of which Hitler had great interests. Hitler derived his “insanity” of power from his misdirected interpretation and use of metaphysical principles. He used knowledge that his human consciousness couldn’t possibly understand and the use of this knowledge for personal gain is part of the imbalance that creates the chaos and karma.

Buddhism: The Damba Tree of Life has four limbs and from its roots four sacred streams of Paradise that represent the the four boundless wishes of compassion, affection, love impartiality. It also represents the four directions of the heart as well.

Chinese Buddism: there are four celestial guardians of cardinal points are Mo-li Ch’ing, the East, with the jade ring and spear; Virupaksha, the West, the Far-gazer, with the four-stringed quitar; Virudhaka, the South, with the umbrella of choas and darkness and earthquakes; Vaisravenna, the North, with the whips, leopard-skin bag, snake and pearl.

Chinese: Four is the number of the Earth, symbolized by the square. There are four streams of immortality. Four is even an number. It is Yin in polarity.

Revelation: There are four angels standing at the four corners of the Earth, holding back the four winds of the earth (Rev 7:1). The great multitude from every nation, tribe, people and language (four-fold description) – Rev 5:9 11:9 13:7 14:6 the four-fold description indicates that these people come from all over the earth.

Egyptian: Four is the sacred number of Time, measurement of the sun. Four pillars support the vault of heaven. There are four canopic jars placed around the dead at the four corners guarded by the four sons of Horus who are associated with the cardinal points. In the Hermetic it is the divine quaternity. It represents God.

Gnostic: belief in Barbelo, the Four-ness of God.

Greek: Four is the sacred number of Hermes.

Hindu: Four is Totality; plenitude; perfection. Brahma, the Creator is four faced. The temple is based on the four sides of the square, symbolizing order and finality. There are four tattvas the four bodies bodies of human and kingdoms of nature which are animal, vegetable, mineral, mind. There are four yugas. Four is the winning throw of the dice. There are four castes and pairs of opposites.

Islamic: tradition the four terms of the quaternary are the Principle which is Creator; Universal Spirit; Universal Soul; and the primordial matter. These correspond to the four worlds of Kabbalism. There are four angelic beings and four houses of death. There are four levels to the Bardo.

Mayan culture: Four giants support the celestial roof. Four is seen as the number of support .

Pythagorean: Four is Perfection; harmonious proportion; justice; the earth. Four is the number of the Pythagorean oath. Four and ten are divinities. The Tetraktys 1+2+3+4=10.

Scandinavian: there are four rivers of milk flowing in Asgard.

Taoist: There are four celestial guardians, Li, with the pagoda; Ma, with the sword; Cho with two swords; Wen with a spiked club.

4 – FOUR - Symbolically number 4 represents the cross and quadrant. It points to something strong, perceptible and material that we can recognize on our own. Since it is related to the cross, number 4 signifies integrity and plentifulness.

There are four basic elements (water, earth, wind and fire), four phases of the Moon, four seasons, and four directions (north, south, east and west). According to the theory of Pythagoras (582 – 500 BC), a Greek philosopher and mathematician, number 4 symbolizes a decade that is the sum of the first four cardinal numbers (1+2+3+4=10). In the last book of the New Testament, number 4 symbolizes four riders of the Apocalypse (war, civil strife, hunger and death). Tetrad, a cardinal number representing the sum of 1 and 3, is seen as the symbol of the unified world.

THE QUALITIES OF PEOPLE WITH NUMEROLOGICAL 4

PsychicJoanne.hubpages.com’s Angel Numbers – Recurring 4′s has this to say:

Attributes of the Number 4

The essence of the number 4 is security, diligent work and strong foundations. It represents the four elements of Air, Fire, Water and Earth, and the four sacred directions, North, South, East and West.

The number 4 symbolizes the principle of putting ideas into form and it signifies work and productivity. The 4 energy is constructive, realistic, traditional and cautious and is the number of system, order and management. This vibration is to do with energy, harmony and co-operation and it is the door to illumination and/or initiation.

When 4’s consistently appear it indicates that your angels are all around you and with you. They are offering you support and inner-strength to enable you to get the necessary work done. They understand that you are toiling towards your goal and ask that you call upon them for help, support, guidance and the emotions of love and security.

The 44 sequence indicates that the angels are surrounding you at this time, loving and supporting you. You have a very strong and clear connection with the angelic realm and are asked to use it to your advantage, and for the benefit of others.

The message of the 444 number sequence is that you have nothing to fear … all is as it should be, and all is well. Things that you have been working on or with will be successful. 444 is an indication that you are being surrounded by angels who love and support you and their help is close at hand, always.

When the number sequence 4444 appears repeatedly, it is an indication that you are surrounded by your angels. These angels are at your side to reassure you of their presence, love and help. Your angels are watching out for you and supporting you in your work and day to day life. 4444 is a message from the angels that their help is nearby and all you need to do is ask for their assistance.

Also from Psychic Joanne, some information on what it means when number patterns repeat themselves in your experience: Angel Numbers Repetitive Number Sequences

And of course this simple message many have come to know from Doreen Virtue’s Number Sequences from the Angels that mirrors Joanne’s sharings:

444 - The angels are surrounding you now, reassuring you of their love and help. Don’t worry because the angels’ help is nearby.

Whether or not you are experiencing the repetitive 4 sequences, may you always realize you are supported and loved, and the angelic realm is there to assist if you ask. Simply recognize your divinity, condition yourself to be more present to receive the signs and messages around you always, and learn to walk through life as the miracle you are and you’ll find life to be as magickal as you dreamed it could.

(Of course as I just finished writing this, the clock turned 11:11 – had to prove a point of course) LOL

Remain Teachable ~ Teachings of The Masters
Become a Patron!