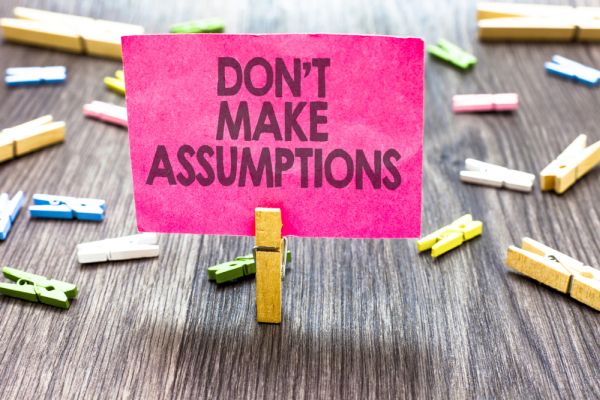 This article in some way goes hand in hand with my previous article on “Paranoia…The Silent Epidemic”–for it is based not just on assumptions per se, but on the high level of sociological paranoia currently being faced all over the world. How many of your thoughts about other people, situations or things are due to assumptions? Are you aware of the implications that these can have in your life?

A couple of the greatest needs most human beings have, are the necessity to feel emotionally safe and to belong; in order to achieve these, they create the feeling of security they so desire through different means and mechanisms, among which we can find “assumptions”. Assuming is something we do very often, throughout our lives, we tend to make assumptions about almost everything.

We forget, ALL of us see the world differently and through our own peculiar set of “life glasses”, which we have acquired based on our own experiences, choices and beliefs. As such, any “supporting” evidence we may find for an argument, does not qualify as empirical truth; for another person may simply have different “evidence” to support their way of thinking.

Very few things in life are black or white…for the most part, all things are subject to different interpretations and these are the result of our own unique makeup (psychological, spiritual, physical and etheric). Psychologists and Sociologists agree evidence is out there to support any type of “conclusion”, and just because the majority may accept a “conclusion” as empirical evidence, does not negate that there is “data” and tests that would support its opposite. For example….two different corporations have studies done by their team of experts; interestingly enough…the results are opposite. Who wins the argument? whichever corporation invested the most on the passing of its product. Another great example is the old adage “history was written through the perspective of the winners”–which means only half of the information has been provided; based on that, we make assumptions of something as empirical truth.

Sociologists have explained, that since most human beings don’t understand at a core level the things I have just mentioned, and the value of agreeing to disagree–it has led to society’s deterioration, where most don’t debate much less communicate, instead they seek to impose. Peace has become only a word to mean…“as long as you believe as I do, I can be peaceful with you”–But if you don’t believe the way I do, I will treat you by the barbaric and non humane rule of “dog eat dog”. Assumptions constitute one of the main reasons for the discussions and conflicts that occur in interpersonal relationships.

We make assumptions about how others think, what they do or how they are going to act; we even take it personally, later blaming them for all of it. This is usually the result of an infantilized society, where the art of respect for another’s opinion has been lost, in exchange for immaturity; where grown adults are behaving like spoiled children in a playground, whom just lost their toy.

In addition to external assumptions, we also assume about ourselves; we tend to either assume we are better and holy or we flagellate ourselves into believing we are sinners and non worthy–once more extremes of an unhealthy belief system. We assume, misunderstand, blame, and create unnecessary “drama” not just to our own personal life, but we add so much drama to society. Why the need to create and participate and buy into drama?…simple–too much time focused on the external, not enough time focusing on our own lives–for each one of us has so much work to do and so much of life to experience; that in reality, if we were actually willing and brave enough to look in more, we would not be so radical; trying to impose our assumptions; but would have the mental maturity to behave kindly towards others.

But why do we continually consciously or unconsciously make assumptions? Because it is easier to assume than it is to be truly “open” to a different point of view. Also it is because our mind continually needs answers to understand what is happening around us, and if rational answers are not found, in its inmaturity, it can automatically assume them–filling that empty space. It is much easier to assume; since it is practically automatic; than to learn to be responsible for our patterns of thinking and for our lack of respect towards others. Another reason is FEAR….fear to be wrong or to be challenged. Fear to not be good enough…yet again that is just erroneous assumptions…for self worth should not be based on whether or not, others think the same way.

We need to learn to be critical mature thinkers, which means we do not assume the why behind someone’s actions, opinions or beliefs…if you do not know…ask. Not to long ago, I was debating the why of a particular situation, instead of assuming, I asked–the answer did not come. At that moment, I chose to exercise my mind and soul by not assuming. No answer in some ways is an answer…but the why, is something I cannot assume. What to do then?…you let it go and move on, instead of unnecessary drama; which is what I was bringing to my life by constantly trying to figure out why things unfolded the way they did.

I have always said, I don’t like the phrase “no drama please”, for it is use to mean “no baggage”; in other words let’s be superficial. However, the type of drama I am referring to at this moment, are unnecessary assumptions of external situations.

Conclusions are different than assumptions; even these are open to interpretation. Assumptions can be dangerous because of the amount of damage they can cause. The day we manage not to assume, we will have learned true communication; where clarity stands out; however, to do this we must we willing to be open and talk frankly, but also be willing to listen. If we can learn to manage to establish a good way of communicating, our problems will begin to dissolve; since the basis of many of them is in the creation of assumptions.

In theory, stopping ourselves from assumptions is easy; practice is very hard, but nothing is achieved without effort and practice. None of us can say we have not ever made assumptions, but if we practice over and over not to assume, not to impose, we can help create solid pillars not just for the foundation of self but for the foundation of a stronger, more mature and cohesive society.

Reprinted on crystalwind.ca with written permission from Sofia Falcone.