Victims-r-Us Superstore
A+ A A- 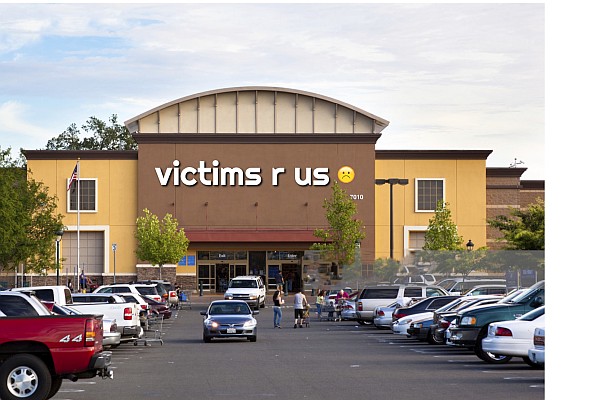 What The Heck Kind Of A Title Is That, You May Ask?  Is Maria Running Out Of Topics And Trying To Lure Us Readers In With Weird Post Titles?  Well, You’re Half Right.  How Many Things Can You Write About In This Ascension, Consciousness Shift After Awhile?  Especially As We Move Out Of Victim Consciousness.

Have you tried having a conversation with anyone in your family or your community without the conversation getting around to victim perpetrator topics?

Even those of us who have become more conscious can be lured into feeling like victims, even of this transformation.

I’m not making a judgement here, because it’s the human condition.  From the moment we are born we are swimming in a consciousness that believes they are being victimized in one way or another, in both overt and very subtle ways.  And the media and culture reflect that right back to us.

And that’s because humanity does not understand that everything they need is already within themselves.  We on the leading edge are just beginning to understand that principle.  We have been taught that energy is outside us, and so we need to go outside to extract energy and bring it into us.  Whether it’s love, health, financial abundance.  And we must protect ourselves from a harsh reality that’s out to get us.  We must have health insurance, Life insurance, death insurance, and wear masks.

If it’s not a virus, or a disease, it’s the government, it’s the boss, it’s a family member, another race, another gender.  For some, it’s the devil himself.

We thought we had to eat the right foods, take the right supplements, do the exercises, go to the gym, get the colonoscopy.

Work at the joyless job.

Lest we become victims of sickness or poverty.

Religions teach that we are victims of a god that will judge us harshly if we don’t comply with his set of rules, whatever those may be.  And it moves around a lot depending upon the religion, the sect, or the agenda of the religious leaders.

For instance for the FLDS community victimhood is the basis of their teaching. It’s based on being persecuted.  They believe that pain and suffering is the only way to know that god is testing them, his chosen ones.  Because god isn’t testing anyone else.  Everyone else has it easy.

And, the misogyny, and sexual and child abuse in that religion isn’t just denied by the members, it’s actually condoned as part of the path to god through pain and suffering.

So their so-call Prophet can do no wrong.  Even when he is arrested for a variety of sexual abuse crimes he was embraced even mightier by his flock.

When members were offered a way out of that community, most refused.  It was the life they knew.  It was family.  To them it was safe.  Safer than what they believed was awaiting them in the outside world.

Many of us have been in abusive relationships where we felt this way.  We truly believed that the protection we were offered there was better than what we would meet outside that door.

Yet behind closed doors we were right there in the lion’s den.

It’s challenging moving outside our comfort zones, isn’t it?

Yet in our awakening we have been pushed out unceremoniously.  But we wanted to face our deepest fears and move beyond them so we could lighten our load.

And being outside of a victim-type consciousness is initially pretty uncomfortable.

Now, here’s the thing.  As we awaken, we can be pretty irritated, and frustrated,  we can be sons-of-bitches at times.  We have no tolerance for energy feeding.  Which is what victim consciousness is all about.

We have a lot to feel frustrated about, what with all of the changes in our consciousness and our body, all the sensitivities, and other physical symptoms.  Even though we chose this lifetime to become embodied, it doesn’t mean it’s a walk in the park.  Quite the opposite. It’s brutal.

But a victim consciousness is more to do with an unconscious state of being.

The victim is feeding too.  Not just the perpetrator.  If we are being fed off of, we in turn will need to find a place to feed from.  It’s a cycle.

We could go to be fed in actual food, drugs, alcohol, or an imbalanced relationship.

There is a difference between needing to vent, and a feeding. We know the difference.

Being here as a consciousness pioneer can be lonely.  But relating to others can be challenging because of the prevailing victim consciousness.

Our mind is used to relating in that way to others and to us.  It’s used to being in defense or offense mode.  Always trying to protect us.  Which means there’s something ‘out there’ that’s gonna get us, sooner or later.  Just wait.

And if you’ve lived here long enough you know all the things that can and do go wrong.

A big part of the pioneering work we are doing is facing all of those feelings of fear, and victimhood.  Not trying to overcome or deny them.  Just accept them in ourself.

This mastery requires a sincere honesty with ourselves.  Not a judgemental one, but a compassionate one,

I know for myself, in order to relate to some of my cafe friends, I will discuss how women are still treated like second class citizens, which they are. But I also know that I am here with my fellow pioneers to release that consciousness that came from my bloodline as a woman that is all about guilt and shame.

And I notice that there is still some of that in me, that buys into that belief that as a woman I need to hang onto the guilt, and the shame, and there’s even some anger in me toward my own gender.

It’s easy to embody it even as a woman.

I know that I am truly not a victim, that I am sovereign, and I am neither man or woman or any gender.  Maria is just an expression of my SOUL-SELF.

Playing around with victim perpetrator topics can be fun, it’s duality at its best.  And it’s fine, as long as we are aware, which we are, that it’s just a game, then we are playing in that sandbox with ourself and others, and we can easily move out of that sandbox any time we want.  It’s for entertain purposes only.

Here’s a fun and sensual video featuring the song, Ascension by Maxwell….