The One Law of Creation - Part 1 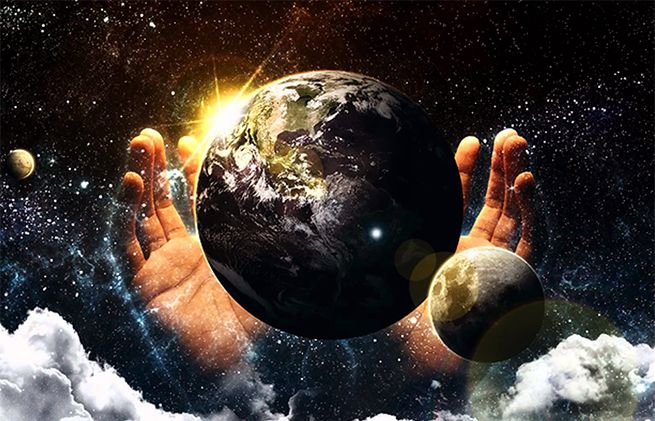 Before Creation, there existed only Infinite Being. No universe, no Creator exploring itself through its own manifestations, not even any motion of which to speak. Just the silent, reflective beingness of the all-encompassing consciousness which is the very essence of completeness and perfection.

From this unchanging, pure beingness of Infinite Being emerged the potential for action as God, the One Creator.

Infinite Being, as the all-encompassing consciousness behind all of Creation, is not 'an infinite being' or 'The Infinite Being.' Any prefix before the name would suggest the existence of more than one. As there is only one, it is referred to simply as, 'Infinite Being.'

From Infinite Being, the One Creator emerged, bringing with it the potential for exploring itself from all possible perspectives. In order to achieve this, the One Creator 'divided the waters' of its consciousness into two equal parts. These aspects of Original Consciousness were then set into complementary motion in order to make Creation possible.

The universe is therefore built upon three Original Principles. In their most fundamental form, these are the Principles of Thought, Feeling and Motion.

The Principle of Original Thought can also be thought of as a Principle of Creative Will. Traditional terms for this principle include the Divine Father, Brahma, or God the Father.

The Principle of Original Feeling can also be thought of as a Principle of Preservation. Traditional terms for this principle include the Divine Mother, Vishnu, or the Holy Spirit.

God, the One Creator, has a triune nature of thought and feeling set into complementary motion. It is the active face of the underlying, unchanging perfection which is Infinite Being.

God can be thought of as equal parts Divine Father and Divine Mother, expressing both aspects in equal balance. You can be assured that they are in equal balance because, were they not, the universe would go unstable and collapse!

Life as we know it, therefore, was designed to be the interaction of thought and feeling through constant change.

In the physical world, the stage upon which the theater of life is enacted employs two essential concepts of consciousness - space and time. These concepts exist in order that life may be experienced from an unlimited number of locations along an unlimited number of timelines. Every coordinate in space and time provides another potential viewpoint of the underlying, unchanging, Eternal Here and Now which is behind all reality.

In the beginning, was said to be the 'word,' a decree issued forth by God the Creator. In the deeper states of meditation, mystics hear the sound of Creation being constantly transmitted by the Sun. They define this etheric, non-physical sound as "A-U-M." The 'A' is thought, or creative will. The 'U' is feeling, or preservation. The 'M' is the motion which intertwines and activates the combined thought and feeling aspects of consciousness.

The Principle of Thought or Creative Will transmits consciousness outwards while the Principle of Feeling attracts and brings consciousness together. The tension between these opposite forces of projection and attraction is carefully balanced in order to determine key factors such as the speed of light, the size of the universe, and the exact density of consciousness experienced by each realm of existence.

For example, the afterlife is a less dense layer of existence than today's physical world. In the afterlife, the mind has more influence on the quasi-physical matter that exists there. Magic, as portrayed in the Harry Potter novels, doesn't work that way in the physical world but, as everyone knows from their nocturnal out-of-body adventures, it does work that way in the afterlife or astral world, and you don't need a wand. This is why magical dramas such as Harry Potter are so compelling. People forget their nighttime adventures when they awake, but they still know intuitively that such drama can be real in another reality.

To summarize, here is the single, all-inclusive Law of Creation:

"The universe is one conscious being, observing the effects of its own thoughts, feelings and actions from all possible viewpoints."

Next week: The underlying concepts implied within the one Law of Creation.

And, this is the perfect time to be a conscious lightworker, to be one who becomes aware of their higher purpose. If you were unsure of how to best progress in this manner, let this be your guide to discovering your own unique potential in your contribution to today's exciting journey of human transformation. The book, "The Lightworker Mission: Reconnect With Your Primary Purpose," is available in paperback or for immediate download here.

We have 1490 guests and no members online