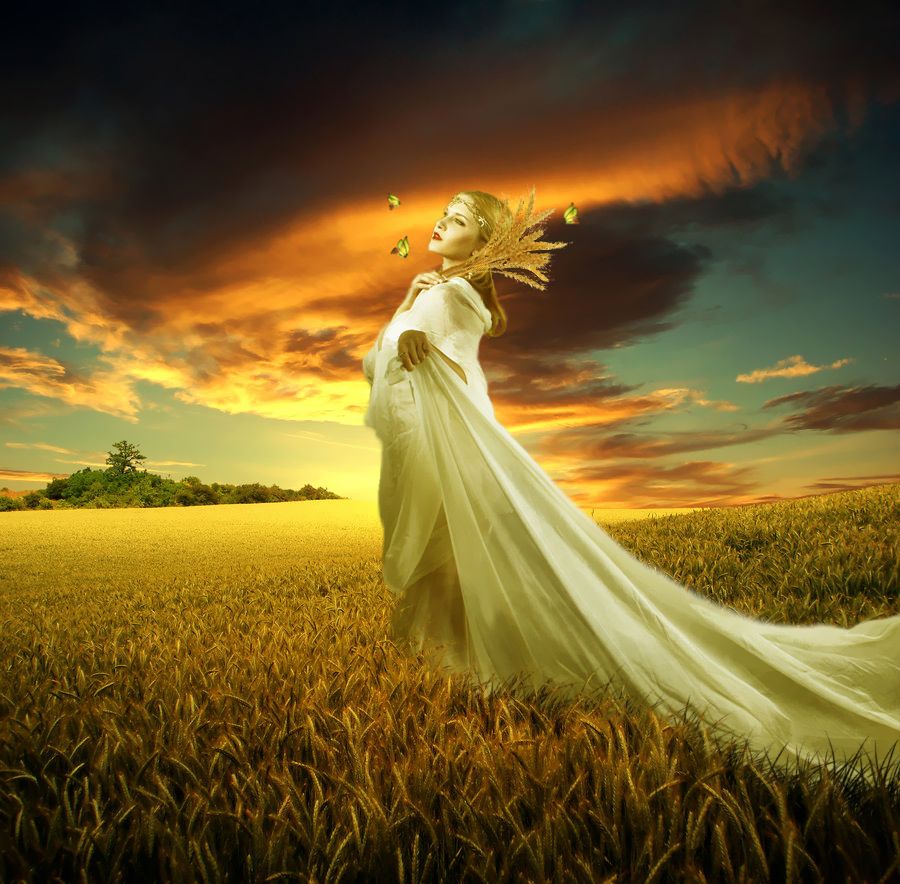 Lammas marks the middle of summer and beginning of the harvest season. Lammas is considered a time of thanksgiving and is the first of the three Pagan harvest festivals. The Sun's strength begins to wane and the plants of spring begin to wither and drop their fruits or seeds for our use as well as to ensure future crops. At this time, we become conscious of the sacrifice the Sun God is preparing to make. We experience a sense of abundance at the same time we begin to feel an urgency to prepare for the death of winter. First grains and fruits of the Earth are cut and stored for the dark winter months.

Underneath the symbolism of sacrifice is the theme of rebirth. The Corn God must die, and He has to do so in order to return. Without the sacrifice, the cycle stops. Although His strength is waning, His essence is still palpable as His energies begin to merge with the harvested crops. It is at this time that the Sun King has reached the autumn of His years, and His rival (or dark self) has just reached puberty. The Sun God has reigned supreme over the ripening grain during the hot summer months. His dedication, perseverance, and action in tending the seeds sown in spring brings a ripe and fruitful bounty.

Although Lammas is the first of the harvest festivals, fertility imagery may still be found, as there are still crops in the field continuing to grow and livestock and game that have yet to be killed. As the God is honored for His harvest, so the Goddess is honored for bringing forth the first fruits, much as a new mother is honored. 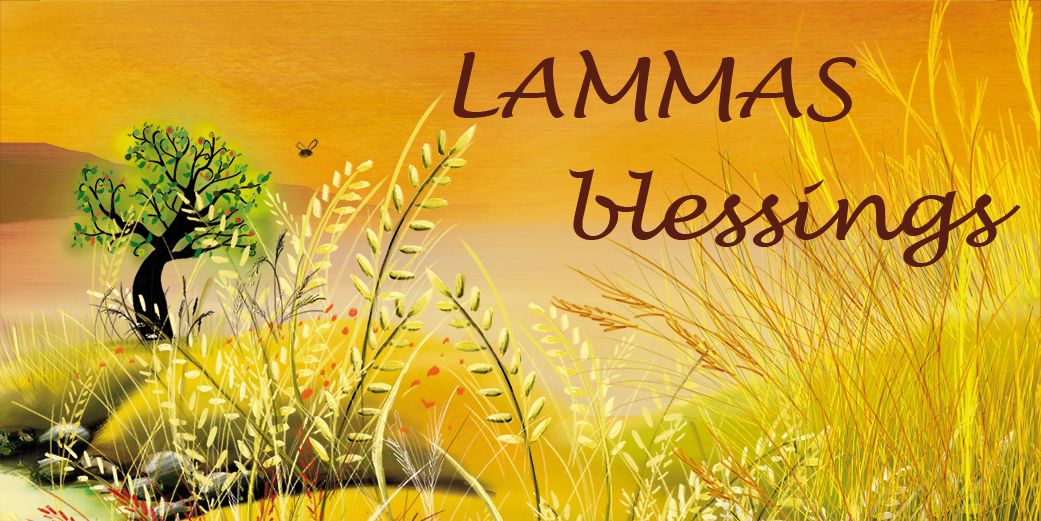 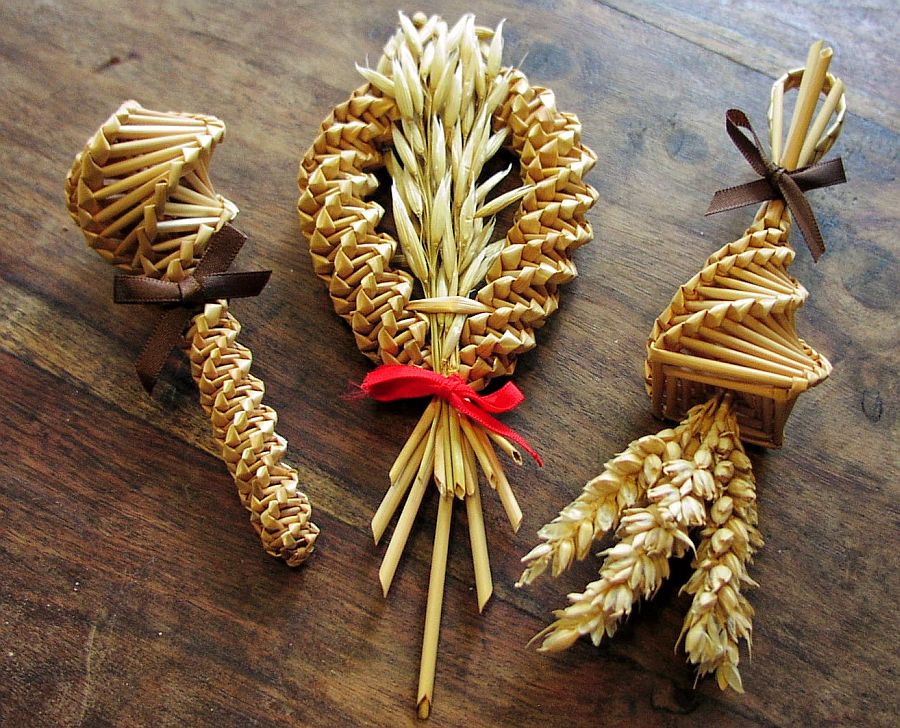 It was upon a Lammas Night
When corn rigs are bonny,
Beneath the Moon's unclouded light,
I held awhile to Annie...

Although in the heat of a Mid-western summer it might be difficult to discern, the festival of Lammas (Aug 1st) marks the end of summer and the beginning of fall. The days now grow visibly shorter and by the time we've reached autumn's end (Oct 31st), we will have run the gammut of temperature from the heat of August to the cold and (sometimes) snow of November. And in the midst of it, a perfect Mid-western autumn.

The history of Lammas is as convoluted as all the rest of the old folk holidays. It is of course a cross-quarter day, one of the four High Holidays or Greater Sabbats of Witchcraft, occurring 1/4 of a year after Beltane. It's true astrological point is 15 degrees Leo, but tradition has set August 1st as the day Lammas is typically celebrated. The celebration proper would begin on sundown of the previous evening, our July 31st, since the Celts reckon their days from sundown to sundown.

However, British Witches often refer to the astrological date of Aug 6th as Old Lammas, and folklorists call it Lammas O.S. ('Old Style'). This date has long been considered a 'power point' of the Zodiac, and is symbolized by the Lion, one of the 'tetramorph' figures found on the Tarot cards, the World and the Wheel of Fortune (the other three figures being the Bull, the Eagle, and the Spirit). Astrologers know these four figures as the symbols of the four 'fixed' signs of the Zodiac, and these naturally align with the four Great Sabbats of Witchcraft. Christians have adopted the same iconography to represent the four gospel-writers.

'Lammas' was the medieval Christian name for the holiday and it means 'loaf-mass', for this was the day on which loaves of bread were baked from the first grain harvest and laid on the church altars as offerings. It was a day representative of 'first fruits' and early harvest.

In Irish Gaelic, the feast was referred to as 'Lugnasadh', a feast to commemorate the funeral games of the Irish sun-god Lugh. However, there is some confusion on this point. Although at first glance, it may seem that we are celebrating the death of Lugh, the god of light does not really die (mythically) until the autumnal equinox. And indeed, if we read the Irish myths closer, we discover that it is not Lugh's death that is being celebrated, but the funeral games which Lugh hosted to commemorate the death of his foster-mother, Taillte. That is why the Lugnasadh celebrations in Ireland are often called the 'Tailltean Games'.

The time went by with careless heed
Between the late and early,
With small persuasion she agreed
To see me through the barley...

One common feature of the Games were the 'Tailltean marriages', a rather informal marriage that lasted for only 'a year and a day' or until next Lammas. At that time, the couple could decide to continue the arrangement if it pleased them, or to stand back to back and walk away from one another, thus bringing the Tailltean marriage to a formal close. Such trial marriages (obviously related to the Wiccan 'Handfasting') were quite common even into the 1500's, although it was something one 'didn't bother the parish priest about'. Indeed, such ceremonies were usually solemnized by a poet, bard, or shanachie (or, it may be guessed, by a priest or priestess of the Old Religion).

Lammastide was also the traditional time of year for craft festivals. The medieval guilds would create elaborate displays of their wares, decorating their shops and themselves in bright colors and ribbons, marching in parades, and performing strange, ceremonial plays and dances for the entranced onlookers. The atmosphere must have been quite similar to our modern-day Renaissance Festivals, such as the one celebrated in near-by Bonner Springs, Kansas, each fall.

A ceremonial highlight of such festivals was the 'Catherine wheel'. Although the Roman Church moved St. Catherine's feast day all around the calender with bewildering frequency, it's most popular date was Lammas. (They also kept trying to expel this much-loved saint from the ranks of the blessed because she was mythical rather than historical, and because her worship gave rise to the heretical sect known as the Cathari.) At any rate, a large wagon wheel was taken to the top of a near-by hill, covered with tar, set aflame, and ceremoniously rolled down the hill. Some mythologists see in this ritual the remnants of a Pagan rite symbolizing the end of summer, the flaming disk representing the sun-god in his decline. And just as the sun king has now reached the autumn of his years, his rival or dark self has just reached puberty.

Many commentators have bewailed the fact that traditional Gardnerian and Alexandrian Books of Shadows say very little about the holiday of Lammas, stating only that poles should be ridden and a circle dance performed. This seems strange, for Lammas is a holiday of rich mythic and cultural associations, providing endless resources for liturgical celebration.

Corn rigs and barley rigs,
Corn rigs are bonny!
I'll not forget that happy night
Among the rigs with Annie! 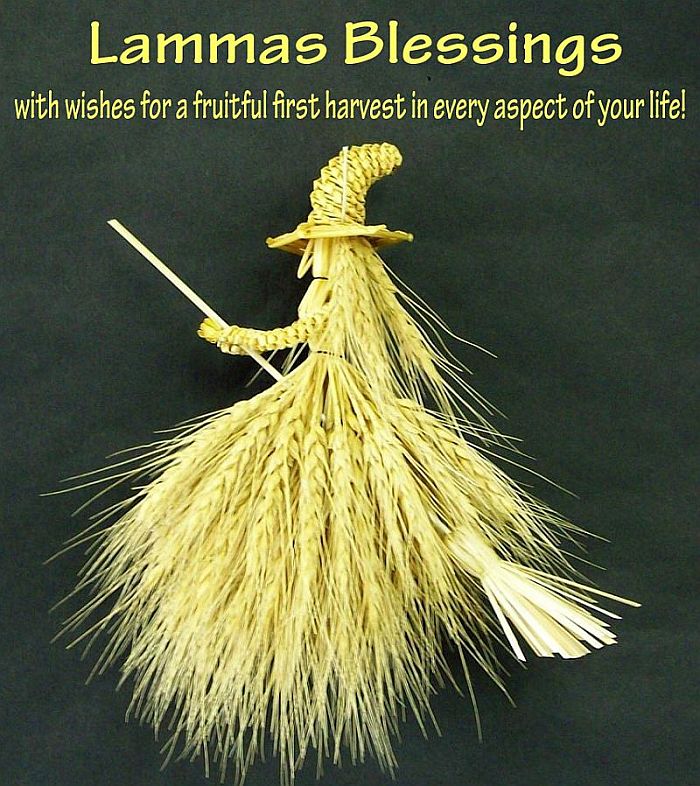 [Verse quotations by Robert Burns, as handed down through several Books of Shadows.]
Source Here