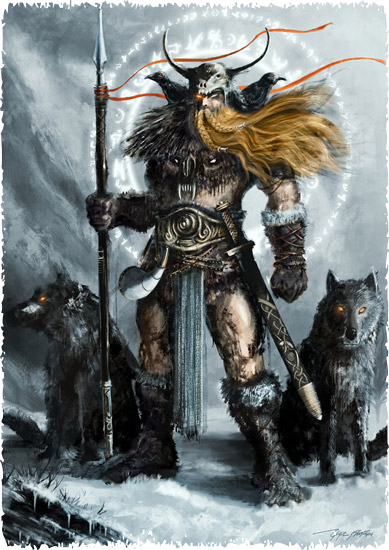 Odin was the chief and the father of all Norse gods. Odin, along with his brothers Vili and Ve, killed the frost giant Ymir, and used his body to create the world. Odin was also worshiped by Vikings, as they believed that he determined the fate of all people. Odin is the greatest of the Æsir. He is the one-eyed god of wisdom, and poetry, and of battles and the slain. He is the god of magic and knowledge. He is the lord of hosts and the god of inspiration. He is the patron of warriors, rulers, and poets. He is recognized by his floppy hat and long cloak.

Odin's character is far more complex than any of the other gods, and that complexity is mirrored by the long list of names used by Odin: Alfödr (Father of All), Valfödr (Father of the Slain), Hangagud (god of the Hanged), Haptagud (god of Captives), Farmagud (god of Cargoes), Hár (High One), Grímr (Hooded One), Svipall (Changeable), Hnikarr (Inflamer), Báleygr (Fiery Eyed), Bölverkr (Evil Doer), Vidurr(Destroyer), Yggr (Terror), Veratýr (god of Men), and even Jálkr (Gelding). The names show the many sides of Odin, as a god of war, a giver of victory, a sinister and terrifying god, and a god who cannot be trusted. The name of Jálkr probably refers to the fact that Odin practices seidr, a powerful but unseemly and effeminate magic that calls into question his masculinity.

Odin was also the god of thinking and reasoning. He lived in Asgard, which was home to all the gods. Odin pretended to be one thing while actually being another. He ruled the other gods, such as Thor and Loki. His devotees included the Berserkers, who went to war without wearing any clothes and were absolutely berserk. The fourth day of the week, Wednesday, was named after Odin. Odin's father was Bor, whose father was Buri, the first god. Odin's wife was Frigga, after whom the sixth day of the week, Friday, was named. Odin's sons were Thor, the god of thunder, and Tyr, the god of war. Odin sat on a throne which ensured that the whole world was visible to him.

From his high seat Hlidskjálf in his hall Valaskjálf, he can survey all that happens in all the nine worlds. His ravens Huginn (thought) and Muninn (memory) fly out into the world every morning and return at nightfall to whisper into Odin's ears all the news they have seen and heard.

In his hall, Valhöll, he entertains the special chosen of the slain warriors who are to battle at his side at Ragnarök. Odin decided who won and lost in wars. He chose the warriors who died in wars as well. These dead warriors were known as einherjar. The valkyries, who were Odin's female assistants, accompanied the dead warriors to Valhalla, a hall in heaven. In Valhalla, the dead warriors were given food and beer. The food was the meat from a boar that was cooked in a very large boiling pot. The boar would incredibly come alive before the next feast. Afterwards, all the gods would practice fighting against the dead warriors, so that they were prepared for the final battle of Ragnarok. All the warriors who would die in this practice fight, would come alive again before the next feast. These warriors helped Odin in the last battle of Ragnarok. 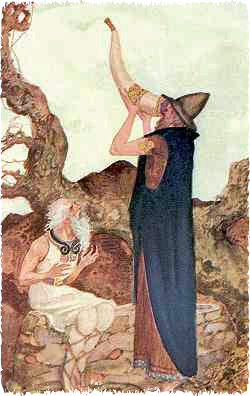 Odin's thirst for knowledge drives his actions in many of the myths. In Nordic mythology, there was a holy tree called Yggdrasil. Drops of dew fell from the tree, into a well of wisdom called Mimisbrunnr. Odin had only one eye, because he threw the other one into the Mimisbrunnr in exchange of a drink from the well of wisdom. The drink was tastier than Kvas, an alcoholic beverage. Odin's pictures still show him holding Mimir's head, which was cut off during the war and it was this head that allowed Odin to know the future.

He impaled himself with his spear on Yggdrasil, the tree of life, for nine days to learn the secrets of writing (runes). Subsequently, there was a writing on the rocks below him and Odin derived wisdom from this writing. He passed on this learned knowledge to mankind.

He is Alfödur (all father), father of many of the Æsir, and creator of the first man and woman. He won the mead of poetry from the giants at Jötenheim, and occasionally shares it with men of Midgard. Odin rides the eight-legged horse Sleipnir, and carries a spear called the 'Gugnir' which would always hit its target. In addition, he had a bow which could shoot ten arrows at a time. He also had a golden ring called the 'Draupnir', which created other rings that were copies of itself, every morning. Odin placed this ring on the funeral pile of his son Balder. He had a goat who could produce an extraordinary beverage, which if sipped, could turn the drinker into a poet. This beverage was stored in three containers that had three different colors - red, gold and brown. Like the other gods, Odin also ate special apples, that helped him stay young and strong.

On at least one occasion, Odin is known to have broken a ring oath, the most sacred and inviolable promise conceivable to a Norseman. That act is perhaps the most significant of the missteps that have led the gods from the carefree early days of the golden era to the turbulent times of the present recorded in the Norse myths.

Odin is notable for revoking his favor from a warrior in the heat of battle, resulting in the death of the fighter. Odin defends his actions by saying that he needs the best warriors with him at Valhöll in Ásgard, to fight at his side at Ragnarök. Again and again, the stories show that Odin is not to be trusted. While he can be generous with treasures and wise counsel, he can also be treacherous, and capricious. He routinely uses deception, misdirection, and seduction to achieve his aims.

The common man looked upon Odin with respect, rather than love; only the high born chose to embrace him.

In the apocalyptic battle of Ragnarok, in which all the gods died, Odin was eaten by a wolf. They say, that Odin has now been transformed into Santa Claus.