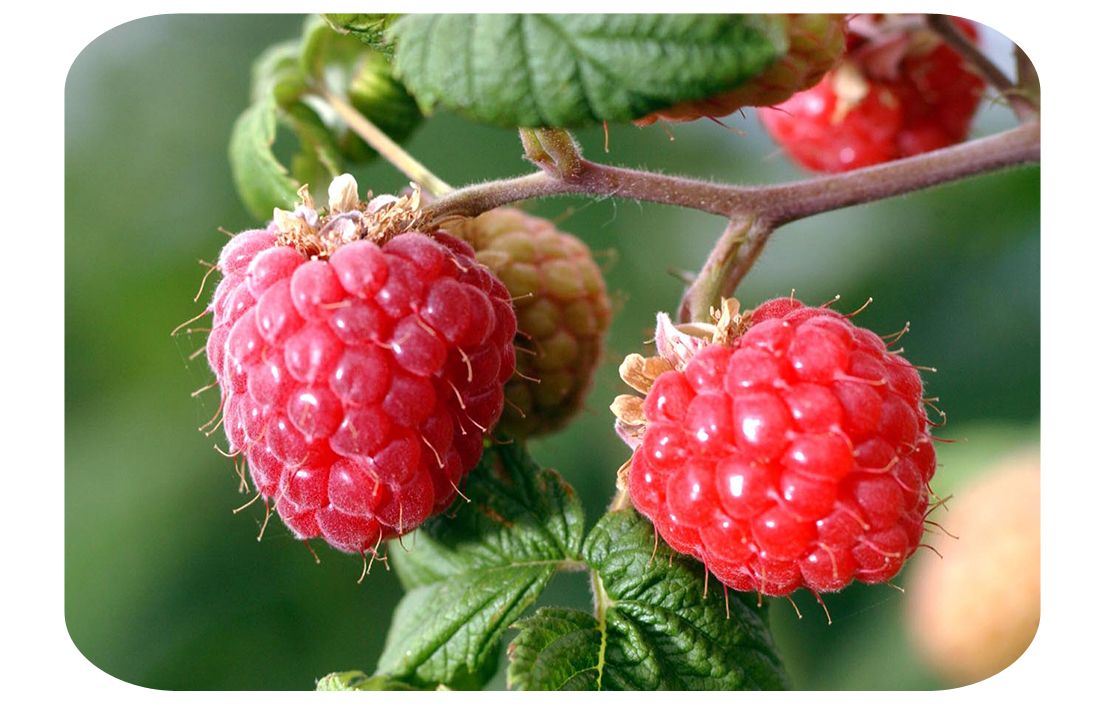 Reminds you to be grateful for all of life’s ups and downs.
Gender: Feminine
Planet: Venus
Element: Water
Powers: Protection, Love

Raspberry leaves contain very powerful, nurturing magic. They are connected with the Great Earth Mother and will remind you to love and honor your family and community.

The brambles (branches) of the raspberry are hung up at doors and windows for protection. This is also done when a death has occurred, so that the spirit won’t re-enter the house once it has left.

Raspberry is served as a love-inducing food, and the leaves are carried by pregnant women to alleviate the pains of pregnancy and childbirth.

To protect your home and all who enter, hang some dried raspberry leaves over your front door. You can also scatter a few handfuls around your property to attract love and good luck.

A native to North America and Europe, the raspberry, due to popularity, has been cultivated since the 16th century. Species of raspberries are seen in most temperate parts of the world. The plants are perennial, but they have characteristic biennial growth habit. The canes are generally erect, freely branched, and prickly, 3-4 feet high and covered with small, straight, slender prickles. The leaves are pale green above, gray-white beneath, doubly serrated with a rounded base, about 3 inches long and 2 inches broad. The small, white, pendulous flowers bloom in May or June in simple clusters, with the ripening of the raspberry in June and July. The fruit is not a true berry but aggregates composed of a number of drupelets.

Constituents: The Raspberry contains a crystallisable fruit-sugar, a fragrant volatile oil, pectin, citric and malic acids, mineral salts, colouring matter and water. The ripe fruit is fragrant, subacid and cooling: it allays heat and thirst, and is not liable to acetous fermentation in the stomach.

In water three or four times a day is a useful solution for the uterus and to stop haemorrhages. Raspberry leaf tea can be taken freely before and during confinement; it will strengthen and prevent miscarriage and render parturition less laborious.

The infusion will also relieve painful menstruation and aid the flow; if too abundant it will decrease without abruptly stopping it. Infuse with prickly ash (xanthoxylum americanum) and blue cohosh (caulophyllum thalictroides) and take ½ cup three times a day.

Raspberry leaves as a feminine douche for leukorrhea is made with 1 tablespoonful of the leaves simmered in 1 pint of water for 10 minutes, covered, cooled, and added to a container of room-temperature water.

Externally: the infusion is a valuable wash in sores, ulcers and raw surfaces as an astringent.

During the last three months of pregnancy, drink herbal teas of raspberry leaves or squaw vine to help strengthen the uterus and prepare it for childbirth. Drink 600 ml (1 pint) of tea a day. While in labour, if contractions are weak and ineffective, drink a tea made from a mixture of raspberry leaves and black cohosh with a slice of ginger. If pains are very sharp and cramping, add crampbark. Massage the back and legs with dilute oils of lavender or camomile.

Magical Use: If you are pregnant, remember to place some of the leaves under the bed where you will be giving birth; they will ease the pain of childbirth. 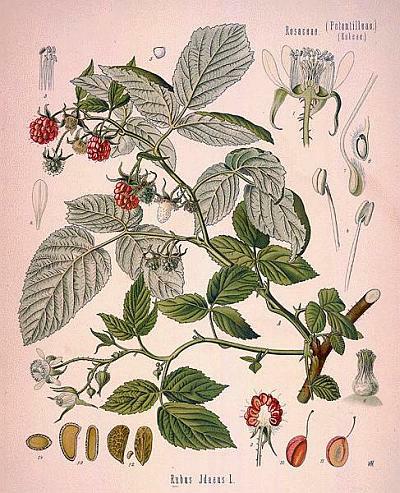 Cultivation: The plant is generally propagated by suckers, though those raised from layers are preferred, because they will be better rooted and not so liable to send out suckers. In preparing these plants their fibres should be shortened, but the buds which are placed at a small distance from the stem of the plant must not be cut off, as they produce the new shoots the following summer. Place the plants about 2 feet apart in the rows, allowing 4 or 5 feet between the rows. If planted too closely, without plenty of air between the rows, the fruit will not be so fine.The most suitable soil is a good, strong loam.

In October, cut down all the old wood that has produced fruit in the summer and shorten the young shoots to about 2 feet in length. Dig the spaces between the rows well and dress with a little manure. Beyond weeding during the summer, no further care is needed. It is wise to form new plantations every three or four years, as the fruit on old plants is apt to deteriorate.

Thank you!
ॐ Namasté - Blessings!
"Life is an echo, what you send out comes back."
© 2008-2022 crystalwind.ca. All rights reserved.
Indigenous Leaders Share The Prophesy Of The Condor And The Eagle
Mother Earth
Magpie Medicine
Get This App Now!

We have 826 guests and no members online