Bast, Goddess of Protection and Pleasure 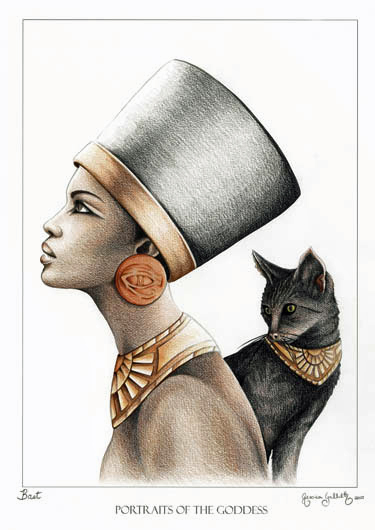 Bast, Egyptian goddess of sensual pleasure, protector of the household, bringer of health, and the guardian saint of firefighters -- she was the original mistress of multi-tasking!

Also called Bastet or Basthet, the goddess Bast is widely known today as the "Cat Goddess". Legend has it that, by day, Bast would ride through the sky with her father, the sun god Ra, his boat pulling the sun through the sky.

Ever watchful, she protected Ra from his enemies. Thus she became known as the Lady of the East, the Goddess of the Rising Sun, and The Sacred and All-Seeing Eye.

But by night, she was a different creature entirely! Bast transformed herself into a cat (renowned for its superb night vision) to guard her father from Apep (also known as Apophis), a serpent who was her father's greatest enemy.

Ra's priests burned wax models of the snake and wrote his name with green ink, trying to put a "hex" on him -- but to no avail. Finally, with her cat eyes shining in the dark, she managed to kill the evil serpent.

Credited with killing the vile Apep, the goddess Bast ensured the warmth of the sun would continue to bless the delta of the Nile with fertile soil and abundant crops and was honored as a goddess of fertility. 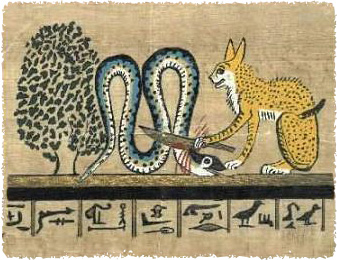 Because of her all-seeing sacred eye (called the utchat) that magically saw through the dark, Bast is one of the few sun goddesses that is also classified as a moon goddess...with her glowing cat's eye reminding us of the moon that it reflects.

One of the most ancient of the Egyptian goddesses, she is depicted as a slender woman having the head of a domestic cat. Sometimes she is shown holding a sistrum, a rattle used as a musical instrument in ancient times. Agile and lithe, Bast was recognized as the goddess of music and dance. 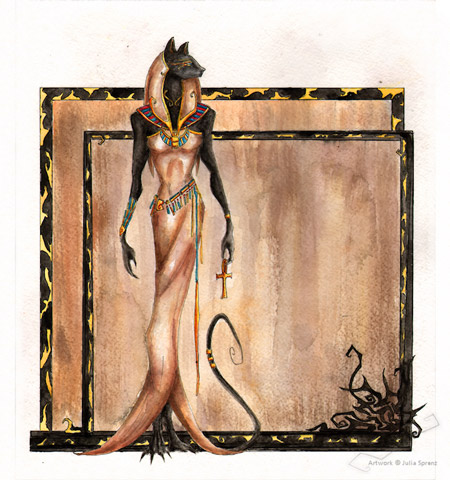 The worship of Bast began around 3,500 B.C.E., before the invention of writing. In 950 B.C.E. it became the 'national religion' when her hometown, Baubastis, became the capitol of Egypt.

Her shrine in Baubastis, fashioned from blocks of pink granite and the lengthy entrance lined with enormous trees, was considered to be one of the most beautiful temples in the world.

The grounds of the templeheld an extensive cat cemetery, where her beloved companions after being mummified, were entombed so they could join Bast in the spirit world.

Cats were honored in the temples of Bast and many felines were in permanent residence there. If a local house caught on fire, the cats would be dispatched to run into the flames, drawing them out of the building. (History's first record of a fire brigade!)

Undoubtedly many returned to the temple a bit singed, but as heroes of the townspeople. Any unfortunate kitty who perished in the undertaking would be restored to life by the goddess Bast. This is possibly the source of the belief that cats have nine lives.

Consistent with her cat-like image and her status as a fertility goddess, Bast was associated with childbirth, perhaps because of the mother cat's continuous production of litters and the loving way she fiercely defends and cares for her kittens.

As a gentler, more benevolent, evolution of the lion-headed goddess Sekhmet, her violent and bloody sister who could bring plagues, the goddess Bast could be invoked to prevent the spread of illness.

Most households contained a small statue of Bast as a form of household protection . . . The All-Seeing Eye, to ward off thieves . . . as the Cat Goddess, to keep the house free of snakes. . . and as the healer to ward off infectious diseases.

An amulet with the utchat (all-seeing eye) hung over the door deterred thieves and vandals, placed over the mantel it averted illness, worn around the neck it protected you as you traveled. An amulet featuring a mother cat with several kittens suckling or playing at her feet was often given as a wedding present to a bride, invoking the help of the goddess to insure that a woman would be able to conceive and bear children

Bast, more than any other of the Egyptian goddesses was perceived as a protector and friend of women and young children. It is hardly surprising that the ancient Greeks referred to Bast as "The Egyptian Artemis".

Does this goddess sound like a gal that the phrase "sex kitten" would be invented for? Hardly! But, of course, there is more to the story than we've told so far; we saved the juicy parts for last. 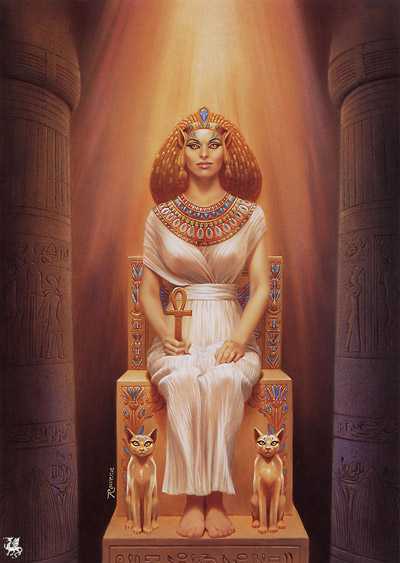 For starters, one of the oldest versions of the goddess Bast was known by the name 'Pasht', from which our word passion was derived. (And from which the English term "Puss" may have arisen.)

Her name itself shares the hieroglyph of a bas-jar, a large pottery jar, usually filled with expensive perfume, a valuable commodity in a hot climate. Indeed, her son Nefertem, a sun god, became the Egyptian god of alchemy and perfumes.

It's not surprising she had a reputation, since she herself had three husbands and was acknowledged as a sexual partner of every god and goddess (explaining her association with lesbians, although bisexuality would be a more accurate description of her nature).

Many festivals were held in her honor, and they tended to be quite rowdy affairs. During the major festival, thousands of men and women (children weren't invited) traveled on barges down the river to Baubastis, drinking and partying mightily.

With loud music, women shaking their rattles, others gyrating in dance, and some lifting their skirts while making lewd comments to the townspeople lined up on the riverbank to watch the procession, the feasts of Bast may have been a precursor to the Mardi Gras and Carnivale. Some think that it is even the basis for the word "floats" that describe the decorated rides in a parade.

The Egyptian goddess Bast reminds us of all that is feline and feminine. Her gifts, very cat-like in nature, include the refusal to be at everyone's beck and call and an insistence on the freedom of expression.

She teaches us to relax and never waste energy, reminding us to luxuriate in beauty, perfume, and to sway in graceful movement. Bast refuses to take anything too seriously.

But most importantly, Bast leads us to accept the true nature of things (ourselves included) and helps us remain unswayed by the opinion of others.

Curled up like a cat lying in the sun, the goddess Bast forms a complete circle . . . a symbol of the eternal.

Bast's goddess symbols are often those associated with her beloved cats. It is not surprising that many of our icons representing playfulness and spontaneity and a feline regal nature are derived from the ancient goddess symbols of the goddess Bast. 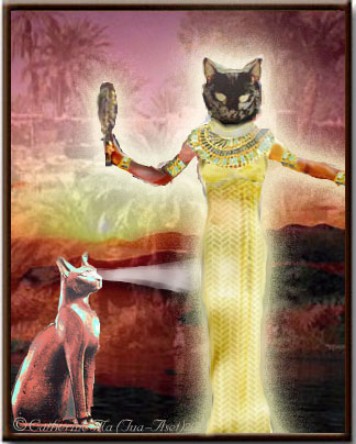