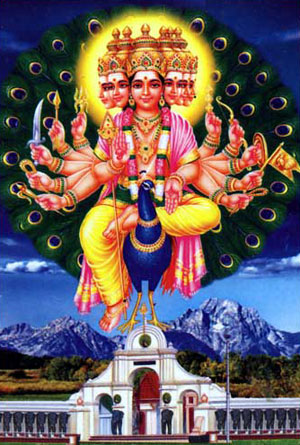 Kartikay is a son of Shiva and brother to Ganesha. While Ganesha symbolizes a spiritual attitude, Kartikay is the scientist of the gods. Kartikay bears 31 names, among which are Karttikeya, Kumara, Guha… Kartikay rides on a peacock, the killer of serpents.

In Sanskrit literature, Kartikay is the son of Shiva and Sati, who immolated herself at her father Daksha's feast. In some versions Parvati is his mother. Shiva retreated into many years of yogic meditation after the death of Sati.

At this time the demon Taraka had been granted a boon of invulnerability to all but a son of Shiva, by Brahma, the creator god. As Shiva had retreated to a life of asceticism, Taraka assumed Shiva would never marry again, and rampaged across the Earth.

The reincarnation of Sati, Parvati (or sometimes Uma) was persuaded to be married to Shiva. Kama, the god of love and sexual desire fired a flower at Shiva in an attempt to cause Shiva to marry Parvati. Kama was obliterated by the light of Shiva's third eye.

However, Shiva was later persuaded to marry Parvati and have a son with her. Shiva then offered his seed to the god of fire, Agni. Agni was unable to bear the brightness and intensity of the heat and they were given for safekeeping to Ganga. The seeds then matured into six children who were raised by the Kartika or Pleiades. Parvati was then united with the children, whom she transformed into one child.

Kartikay was then sent out to do battle with the asura, Taraka, accompanied by the devas. He later slew Taraka after seven battles in different sites across India. After his defeat of Taraka, Kartikay is said to have become the general of the gods and to have led them to victory on various occasions. He later earned the title of war god and general of the demi-gods.

Lord Kartikeya symbolizes a person of perfection. He is the war God and was created by all the Gods to bring an end to the demons. Lord Kartikeya is very masculine and fierce. He is also regarded as fire and is very fiery in nature. The Lord has a spear in his hand called Sakti which represents the destruction of evil and with his other hand he is found blessing his devotees. Lord Kartikeya's vehicle or Vahana is a peacock that has the capacity of killing serpents by gripping in his feet. Thus, the peacock represents the destroyer of harmful and sensual desires of humans.

Kartikeya, also known as Murugan, is the Hindu god of war or the Hindu Mars. The birth of Kartikeya has many legendary stories.

Kartikeya is represented as god mounting on his Vahana, the Peacock and carries the weapon the Vel. He is sometimes depicted with many weapons including a sword, a spike, a scepter, a discus and a bow although more usually he is depicted wielding a sakti or spear. This signifies Kartikeya`s purification of human ills. His spike symbolizes protection; discus portrays his knowledge of the truth. The mace represents his strength and the bow is a sign of his ability to defeat all ills. His peacock mount symbolizes his destruction of the ego. The six heads of Kartikeya is represented as the six Siddhis granted upon yogis over the course of their spiritual development.

In prehistoric ages in India, Kartikeya was regarded as the patron deity of thieves. In the Puranas it is said that Kartikeya had dug through the Krauncha Mountain to kill the demon Taraka and his brothers. Kartikeya helped Shiva fight the newborn Ganesha, other son of Shiva. In the Brahma Vaivarta Purana, he is represented as the elder son of Shiva and Ganesha as the younger. In South India, it is believed that he is the younger of the two.

Kartikeya is believed to be a handsome bachelor. Other stories say that he had two wives Valli and Devayani.

We have 859 guests and no members online