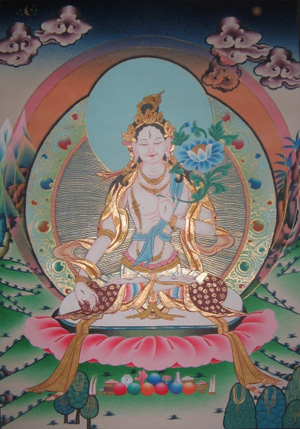 Tara, Goddess of Peace and Protection

Goddess Tara is probably the oldest goddess who is still worshipped extensively in modern times. Tara originated as a Hindu goddess, a Great Goddess -- the Mother Creator, representing the eternal life force that fuels all life.

There are many embodiments of Tara, but the best known are the White Tara and the Green Tara.

The peaceful, compassionate White Tara gently protects and brings long life and peace. The more dynamic goddess, Green Tara is the "Mother Earth", and a fierce goddess who overcomes obstacles, and saves us from physical and spiritual danger.

In Sanskrit, the name Tara means Star, but she was also called She Who Brings Forth Life, The Great Compassionate Mother, and The Embodiment of Wisdom, and the Great Protectress.

Adopted by Buddhism, she became the most widely revered deity in the Tibetan pantheon.   In Buddhist tradition, Tara is actually much greater than a goddess -- she is a female Buddha, an enlightened one was has attained the highest wisdom, capability and compassion. . . one who can take human form and who remains in oneness with the every living thing.

The oldest reference to the goddess Tara, perhaps, is found in an ancient saga of Finland thought to be 5 thousand years old. The saga speaks of a group known as Tar, the Women of Wisdom.

The Celts called their Great Goddess Tara. Her name is thought to be the root of the word Tor, which is a mound of earth or hillock imbued with spiritual energy or connection to the other worlds.

We also hear the echo of her name in the Latin word for earth, Terra, a connection between Tara and the concept of "Mother Earth".

The Goddess Tara is also associated with Kuan Yin, the great Chinese goddess of compassion. In South America she was known as the ancient mother goddess Tarahumara.

The Cheyenne people revere the Star Woman who fell from the heavens and whose body became the earth that provided them with food.

The ancient Egyptian Goddess Ishtar who, in her myths, came to earth from the heavens and instructed her people to co-mingle and intermarry with the earthlings to give them the benefits of their learning and wisdom was yet another incarnation of the Goddess Tara.

In the legends of Tibet where the worship of the Goddess Tara is still practiced in the Buddhist tradition, it is told that the goddess Tara is the feminine counterpart of the Avalokitesvara, the Bodhisattva who is reincarnated as the Dalai Lama.

Bodhisattvas are beings who have reached enlightenment and are 'eligible' for Budda-hood but have postponed their own nirvana, choosing instead to be remain in the cycle of birth and rebirth in order to serve humanity and assist every being on Earth in achieving nirvana themselves.

It is told that Tara first appeared rising from a lotus blossom in the lake that had formed from Avalokitesvara's tears of compassion, tears that fell when he first beheld the scope of suffering in the world. 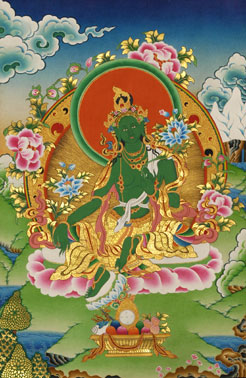 Because of her essential goodness, she was granted the right to assume her human form as a man.  But Tara elected instead to remain in her womanly form.

"There are many who wish to gain enlightenment

And there are few who wish to work

for the welfare of living beings

in a female form.

Therefore may I, in a female body,

work for the welfare of all beings,

until such time as all humanity has found its fullness."

One of the myths of the goddess Tara demonstrates her compassionate and loving nature and tells how she got the name "Tara of the Turned Face".

An elderly woman who was a sculptor worked in a city where there was a large Buddhist temple called the Mahabodhi (Great Wisdom). She sculpted a statue of the goddess Tara and built a shrine to house it. Upon completing the project she was filled with regret when she realized that she had not considered the placement of the shrine. "Oh no," she thought, "Tara has her back to the Mahabodhi and that isn't right!"

Then she heard the sculpture speak to her, saying "If you are unhappy, I will look toward the Mahabodhi." As the woman watched in amazement, the door of the shrine and the image of the goddess Tara both turned to face the Temple.

Such is the love and compassion of the goddess Tara.

The ancient goddess Tara in her many incarnations has many gifts to share with contemporary women. Tara embodies the feminine strengths of great caring and compassion, the ability to endure stressful and even terrifying moments, the acts of creation, and the source of sustenance and protection.

Demonstrating the psychological flexibility that is granted to the female spirit, the goddess Tara, in some of her human forms, could be quite fierce and wild.

Refugees fleeing the horrors of the occupation of Tibet by the Chinese armies recounted numerous stories of the Green Tara that protected them during their torture and guided their flight to freedom.

In other of her forms, such as the White Tara, she embodied inner peace and spiritual acceptance. She symbolizes purity and is thought to be part of every good and virtuous woman.

Tara is an archetype of our own inner wisdom. She guides and protects us as we navigate the depths of our unconscious minds, helping us to transform consciousness, our own personal journeys of freedom.

It is the goddess Tara who helps us to remain "centered". The myths of the Goddess Tara remind us of our "oneness" with all of creation and the importance of nurturing the spirit within.

Tara (most widely known in her incarnations as the White Tara or the Green Tara) is often represented as a beautiful, light-skinned, slender and elegant woman.  She is often pictured with her male counterpart, a Buddha. When depicted as Green Tara, her skin is often painted in shades of green.  Many of her goddess symbols allude to her "all-seeing" nature by showing eyes painted on her forehead, palms, and feet . . . meant to imply that all of her acts are performed with awareness and wisdom.

General: Star, third eye (in the middle of the forehead), seven eyes (including eyes in the palms of the hands and soles of the feet), full moon, lakes, rainbows, and the number 3, 7, and 11

Plants: Lotus blossom, either open or closed and any orange flowers

Colors: All colors, but especially white and green