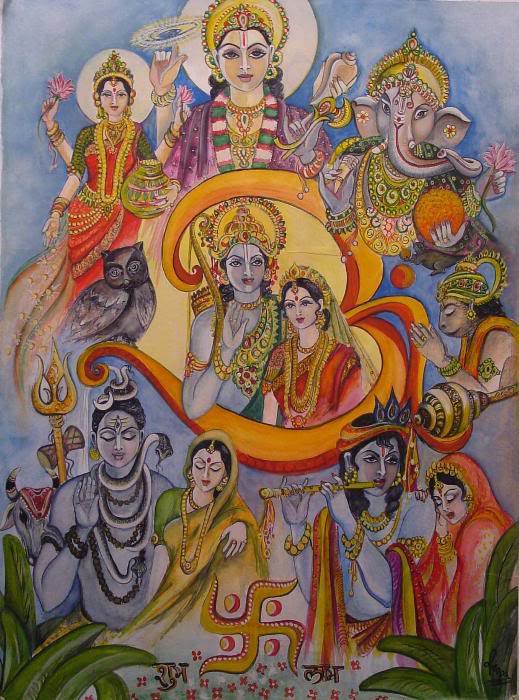 Rig Veda - lore of the verses, enumerates numerous Vedic Gods. Vedic priests believed in ceremonies and rituals, which were offered to appease these Gods. No one Vedic God has been considered the Supreme God. In fact, different Gods have been considered as Supreme at different times, attributing the powers and qualities of one to another. Apart from Gods who have been attributed specific characteristics, several inanimate objects, qualities, emotions and various forms of nature had also been deified and worshiped.

The earliest accepted Gods were:

Varuna (the God of oceans),

Soma (the God of speech, deity of soma creeper),

Ushas (the Goddess of dawn),

Yama (the God of death),

Adityas (a group of deities, who are six in number in the Rig Veda, eight in most of the Brahmanas and twelve in the Satapatha Brahmana),

Vasus (eight in number), The eight attendants of Indra

Lord Vishnu, the second Trinity finds a secondary place in the Rig Veda.

In the late VEDIC period the two ITIHASAS or epics Ramayana and the Mahabharata were compiled. The heroes of the Vedic age gradually took the place of the earlier shadowy Vedic Gods and found their places in the Puranas. This formed the phase of post-VEDIC gods or the PURANIC GODS who had their seeds and roots in the VEDAS giving rise to the concept of TRIMURTI.

Thus emerged the transition of Hindu mythology from Vedic Gods (the Cosmic Trinity) to Puranic Gods (the Hindu Trinity) who took more significant form and entity and have been worshipped in various forms ever since.