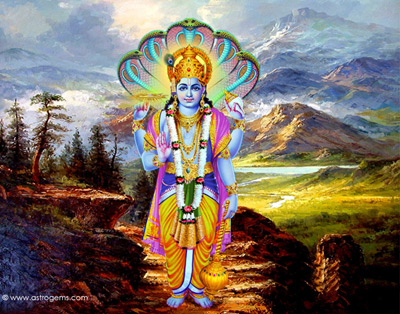 Vishnu - Preserver and Protector of Worlds

Vishnu is the second god in the Hindu triumvirate (or Trimurti). The triumvirate consists of three gods who are responsible for the creation, upkeep and destruction of the world. The other two gods are Brahma and Shiva.

His role is to return to the earth in troubled times and restore the balance of good and evil. So far, he has been incarnated nine times, but Hindus believe that he will be reincarnated one last time close to the end of this world.

Vishnu's worshippers, usually called Vaishnava, consider him the greatest god. They regard the other gods as lesser or demi gods. Vaishnava worship only Vishnu. Vishnu monotheism is called Vaishnavism.

What do the ancient texts say about Vishnu?

In the Rig Veda, which is the holiest of the four Vedas, Vishnu is mentioned numerous times alongside other gods, such as Indra.

He is particularly associated with light and especially with the Sun. In early texts, Vishnu is not included as one of the original seven solar gods (Adityas), but in later texts he is mentioned as leading them.

From this time, Vishnu appears to have gained more prominence, and by the time of the Brahmanas (commentaries of the Vedas), he is regarded as the most important of all gods.

Two of Vishnu's incarnations, Rama and Krishna, are also the subject of the epic stories Ramayana and Mahabharata, respectively.

Vishnu is represented with a human body, often with blue coloured skin and with four arms. His hands always carry four objects in them, representing the things he is responsible for. The objects symbolize many more meanings than are presented here:

The conch: the sound this produces 'Om', represents the primeval sound of creation

The chakra, or discus: symbolizes the mind

The lotus flower: an example of glorious existence and liberation

Standing upright on a lotus flower with Lakshmi, his consort, close by him

Reclining on the coils of a serpent, with Lakshmi massaging his feet. They are surrounded by the Milky Ocean.

Vishnu rides on the King of Birds, Garuda, who is an eagle.

What are Vishnu's incarnations?

Vishnu has appeared in various incarnations nine times on this earth, with the tenth predicted.

* Churning of the Ocean

* In this avatar, Vishnu recovered the stolen Vedas

4. Narasimha (half lion, half man)

* Vishnu managed to vanquish a demon who had gained immunity from attacks from man, beast or god

5. Vamana (dwarf sage with the ability to grow)

* In this story, the evil demon Bali had taken over the earth and had pushed all of the gods from the heavens as well. Vishnu took the form of a dwarf, who tricked Bali into giving him as much of Bali's empire as he could cover in three steps. Vishnu as Vamana grew so large that with one step he had covered the earth, with the second the heavens, thus returning the ownership to the gods.

* Vishnu rids the earth of irreligious and sinful monarchs

* As Rama, he kills the demon King Ravana, who abducted his wife Sita

* Krishna is the hero of the Mahabharata, an epic poem. He also delivered his famous message, known as the Baghavad Gita.

9. Buddha (the all knowing one)

* who appeared in the 5th century BCE. In some traditions, Balarama replaces Buddha as an incarnation of Vishnu.

* Expected towards the end of this present age of decline, as a person on earth, seated on a white horse. 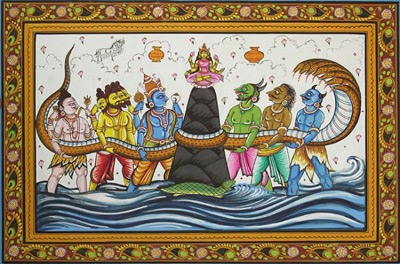 The churning of the Milky Ocean is the story that explains how the gods finally defeated the demons and became immortal.

In the story, Vishnu advised the other gods to churn the Milky Ocean in order to recover a number of lost treasures, including the elixir of immortality and Lakshmi, the goddess of success and wealth. Both of these items would enable the gods to defeat the demons who had taken taken over the universe.

Knowing the gods would be unable to churn the great ocean themselves, Vishnu struck a deal with the demons. He told them they would get a share of the treasures, including the elixir of immortality, if they helped to churn. They agreed.

Vishnu told the gods and demons they should use Mount Madura as a churning stick, and the giant serpent, Vasuki, as a rope.

Vishnu managed to persuade the demons to hold the head of the snake, which was spitting furiously, while the gods held the tail end. The serpent was then coiled around the mountain. Each side alternately pulled the rope then allowed it to relax, causing the mountain to rotate in the water.

Before they could regain the treasures, however, there were many problems they had to face.

As the gods and demons churned, the mountain began to sink into the soft sand bed of the sea.

At the request of the gods, Vishnu incarnated as a turtle. He placed the mountain on his back to act as a foundation stone, thus allowing the churning to continue. Some reports say it was churned for a thousand years before anything came up.

When the elixir of immortality finally rose to the surface, the demons rushed to grab it.

But Vishnu assumed the form of Mohini, a beautiful woman who captivated all the demons. By sleight of hand she changed the elixir for alcohol and returned the precious liquid to the gods.

The churning also brought Lakshmi forth from the ocean. She came as a beautiful woman standing on a lotus flower. Seeing all the gods before her, she chose the god she felt was most worthy of her. Vishnu and she have been inseparable since. 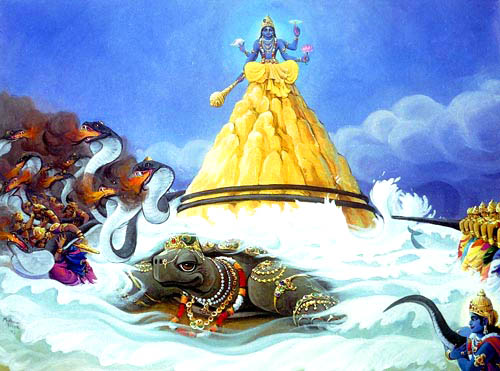