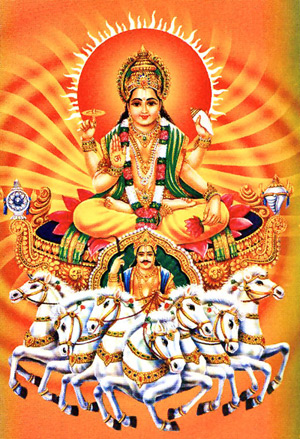 In India, Surya corresponds to the Greek Helios - he is the special god who dwelt in the body of the sun. Surya is described as the husband of dawn, as well as her son. He is also the guardian of the south-west quadrant, His father is the sky god, Dyaush or Indra. One myth tells how he arose from the eye of the world-giant, Purusa. Surya has golden hair and golden arms. He drives in a chariot drawn by a team of 4 or 7 horses.

Lord Surya is the source of life, light and all energy in the cosmos. There is no alternate to the life-giving rays of the Surya Dev. He is the most powerful and majestic visible Devata. Surya Dev has also played role of Master-Guru for many Devatas, number of Seers and Devotees. The three worlds have the sun as their source of origin. The entire universe including Devas, Asuras and human beings originates from him. The brilliance of the deities namely Rudra, Upendra and Mahendra, the splendour of the leading Brahmins and heaven-dwellers of great refulgence, and of all the worlds is lord Sun-the soul of all, the lord of all-Devas as well as human beings. The sun alone is the root cause of three worlds. He alone is the greatest deity. There are large number of kings and rulers around the world, who represent Solar Dynasty.

It has been mentioned in the Brahma Purana that everything is born of Lord Surya; everything is dissolved in him. He is the cause of origin and destruction of the universe. The following units of time have their origin in the Sun-god like moments, Muhurta (units of 48 nets), days, nights, fortnights, months, years, seasons and Yugas.

Lord Surya is tawny in spring; during summer he resembles gold, he is white during rainy season; he is pale, grey during autumn; he is copper-coloured in early winter; he is red during late winter. Thus the colours of sun-god caused by the seasons have been recounted. The Sun-god is the dispeller of darkness. He is the deity of great brilliance and is considered the Supreme Soul. Lord Surya is also the cause who brings about the change of seasons in the universe and it is also the sun-god which acts as the pivot of the entire universe.

Various treatises and Indian Puranas say that there are many names of Lord Surya. And each name of Surya Dev refers to a quality of consciousness. Some of the names of the sun-god are Aditya, Savita, Surya, Mihira, Arka, Prabhakara, Martanda, Bhaskara, Bhanu, Chitrabhanu, Divakara and Ravi. It is believed that the man who repeats the having the multiple names of the sun-god with pure mind and concentration, is liberated from conflagration of miseries and ocean of sorrows. He obtains all objects of his desire. Devotees enjoy fullness of energy, brilliance, inner light, perfect health and longevity. Their life shines like golden hue with the grace of Surya.

Sunday is the day of Lord Surya. It is recommended to listen to Sahasranam and other stotras of Surya Dev on Sunday.