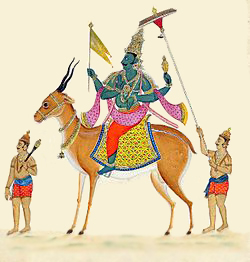 Vayu is the Hindu god of wind. In Vedic times he was much revered as one of the Hindu Triad. After that age, in the Brahmanic era, he was reduced in status but he still continues to occupy a certain eminent position in the Hindu pantheon. Vayu roams all over the earth and the heavens though his home is in the north-west, a quarter which he rules exclusively. He is featured as a destructive god who has an intemperate character and is often subject to violent desires which he never strives to repress. He is also said to be the king of the Gandharvas, spirits of the mountains who dwell in the foothills of Mount Meru, a mythical summit often mentioned in Hindu religious texts.

Notwithstanding Vayu's amicable association with Mount Meru, he nevertheless once mounted an attack on it and broke its summit. The story goes that, for some unknown reason, Vayu was incited by the sage Narad, a person who can be taken as akin to Mercury of Greek myth, to break off the top of Mount Meru. Vayu, being vindictive and violent, strived to do this for a full year, blowing hard continuously at the Mount but it was nobly defended by Garuda who spread his great wings and took the brunt of Vayu's force, thus shielding the mythical peak. After a full year had passed in this struggle, Garuda became tired and left his guard-post for a while. Narad, who was more mischievous than vindictive, saw the opportunity in this and immediately exhorted Vayu to double his efforts. This time Vayu was successful and Mount Meru lost its respectable top, which Vayu then hurled into the sea where it became the island of Lanka (present-day Sri Lanka). 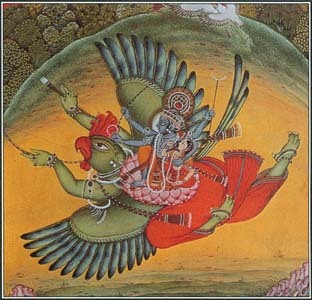 Vayu's lusts were indiscriminate and the number of illegitimate children he engendered is legion. Though he was married to a daughter of Vishwakarma, the divine architect, he had offspring by many notable female characters of Hindu myths. One of his most famous illegitimate offspring is Hanuman, the monkey god. Hanuman's ability to fly is credited to his covert parentage. Another offspring Vayu engendered is Bhim, the third son of Kunti, one of the two principal mother figures of the Hindu epic Mahabharata. Bhim's antecedents are more respectable as his mother conceived him as a result of a prayer to Vayu asking him for a son. There is also a tale told of Vayu trying to seduce all the hundred daughters of King Kusanabha. When they resisted all his amorous efforts Vayu gave all of them crooked backs. 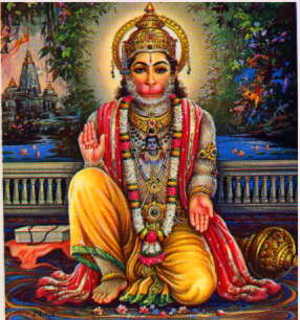 Vayu is nevertheless important for certain Hindu ceremonies and is then perceived of in more temperate terms. He is called "the bearer of perfumes" and is credited with being a benign force who is a constant companion of Vishnu, one of the incumbent Hindu triad, and his wife Lakshmi, goddess of wealth and beauty.