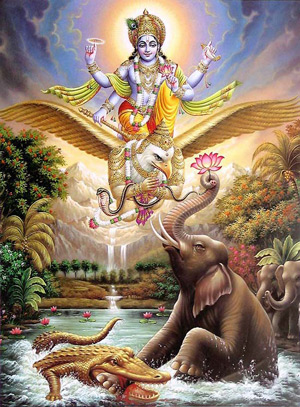 Garuda is the king of the birds and often acts as a messenger between the gods and men. Garuda has the head, wings, talons and beak of an eagle and the body and limbs of a man.

Garuda's mother was Vinata and his father Kasyapa, the law-minded grandfather of the world, who did tapas at the banks of the Lamhitya.

When Garuda crawled out of his egg, he was very hungry. His mother sent Garuda to get advice from his father, who sent him to a place, where he could find food. Garuda could eat the natives living there, but he was adviced to spare the Brahmin, who was living with the natives. However by accident, Garuda swallowed the Brahmin, who got stuck in his throat. The Brahmin said that he would give up his life, if Garuda would not let go all of his relatives. Out of fear to murder a Brahmin, Kasyapa ordered Garuda to spit out the natives with their Brahmin.

Still hungry, Garuda's father sent him to the ocean, where a giant elephant and a tortoise where fighting. He took them and flew to the sky. When Garuda perched on the branch of a tree it broke and again Garuda was full of fear of killing cows and Brahmins with the falling branch, so he caught it. Meanwhile Vishnu saw the bird and asked what Garuda was doing. The bird replied that no tree or mountain seemed able to support his weight. Vishnu offered his arm to sit on and did not tremble when Garuda took place on it.

Even after eating, Garuda was still hungry, so Vishnu offered the flesh of his arm. When Garuda ate from it, no wound showed. Garuda bowed his head to Vishnu, realizing his divine nature and was his heroic friend for all times. In many indian epics, Garuda carries Vishnu.

At a time when Garuda's mother Vinata became imprisoned by Kadru, mother of the serpents, Garuda sought to release her. As a ransom, the serpents demanded the cup of Amrita, which was held by the gods. Garuda stole the Amrita from the Gods and thus he could liberate his mother. Just as the serpents were about to drink from the Amrita, Indra snatched the cup away from them. Nevertheless, a few drops were spilled and licked up by the serpents, which made them immortal and also split their tongues. In another version, Garuda spilled the amrit four times at the four places where the Kumb Mela festival is now held. His journey took 12 days, equaling 12 years for mortals.