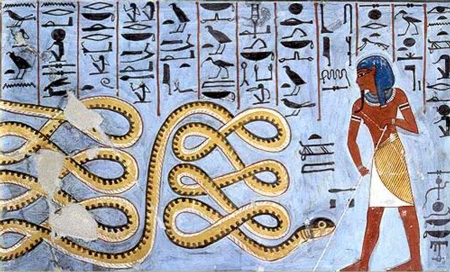 With the possible exception of Aten only during the Amarna Period, no single Egyptian god was considered to be really all powerful. Many lived with the threat of destruction, and even one of the greatest of Egyptian gods faced such threats every single night. Apophis (Egyptian Apep) was the great adversary of the sun god, Re. and was the very embodiment of the powers of dissolution, darkness and non-being. Hence, he was a sort of void or “black hole” forcing those he swallowed into that non-existence which the Egyptians feared so greatly. Being completely outside of the natural world, he was believed to require no nourishment other than to “breathe” his own shouts. He was a huge serpent who was thought to have existed at the beginning of time in the waters of primeval chaos prior to creation and his power was so great that it was thought that he would continue to exist in an endlessly malevolent cycle of attack, defeat and resurgent attack. He is thus known by many epithets, ranging from evil lizard, opponent and enemy to world encircle and serpent of rebirth. During the Roman period, he was interpreted as “he who was spat out” and linked to the saliva of the goddess Neith.

There is no evidence of this god prior to the Middle Kingdom. He seems to have come into existence in the Egyptian mind during the troubled times just after the pyramid age. Most of the god’s mythology seems to have been developed mostly during the New Kingdom in funerary texts. There are various accounts of this malevolent force, but overall, as the sun god made his nightly voyage through the underworld and each morning as the solar barque was about to emerge into the daylight, it was attacked by the great serpent whose terrifying roar echoed through the darkness. The serpent was said to hinder the passage of the solar barque by means of its coils which are described as “sandbanks”, and also by gorging the waters of the underworld river in order to attempt to strand the barque of Re.

Apophis was sometimes equated with Seth, the god of chaos, yet the nature of Apophis seems to have always been dark and threatening, while Seth could at times be beneficial. In some texts, Seth was even enlisted by the sun god in order to defeat the serpent. According to some mythologies, Apophis hypnotized Re and all of his entourage who sailed with him, with the exception of Seth, who resisted the serpent’s deadly stare and repulsed him with the thrust of a great spear.

However, in other accounts, Re’s companions and even the dead themselves, who could transform themselves into a form of the god, Shu, were involved in this cyclical battle for the survival of creation and order. Most notably, in the Book of Gates, Isis, Neith and Serket, together with other minor deities and some forms of monkey helped capture the monster with magical nets. Afterwards, he was restrained by deities including the earth god Geb and the sons of Horus, who cut his body into pieces, though each night he is revived to attack once more. In fact, in some myths, the sun god is encircled or swallowed by the serpent who later disgorges him as a metaphor of rebirth and renewal.

Apophis, like Seth, was also associated with various frightening natural events such as unexplained darkness such as solar eclipse, storms and earthquakes. Hence, he was always an underlying threat to the very stability of the cosmos.

Apophis is usually depicted in funerary texts and other settings as a great serpent, sometimes with tightly compressed, spring-like coils to emphasize his vast size. He is sometimes described as being over sixteen meters in length, with the first section of his body made of flint. He is usually shown being restrained, dismembered or in the process of being destroyed, often by multiple knives. In the tomb of Ramesses VI in the Valley of the Kings on the West Bank at Thebes (modern Luxor), Apophis is shown with twelve heads above its back representing those he has swallowed who are freed, if only briefly, when he is vanquished. Once Re has passed by the snake, the heads are destined to return into the body of Apophis until freed again, only briefly, the next night. In the private tombs and funerary papyri, and other scene of a different type is found where Re or Hathor appear in feline form in order to slay the serpent by cutting it up with a knife. The serpent is also symbolically portrayed in some temple scenes (at Dendera, Deir el-Bahri, Luxor and Philae). There, the king strikes a circular ball-like object which represents the evil “eye of Apophis”. 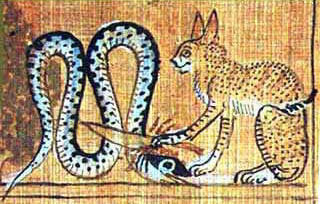 Apophis was, of course, never worshiped. However, he was included in various cults as a god or demon to be protected against. Various magical texts and rituals were produced to combat his effects upon the world. In fact, the text that Egyptologists refer to as the “Book of Apophis” was a collection of these magical spells dating to the late New Kingdom, though the best preserved example, known as the Bremner-Rhind Papyrus now in the British Museum, was produced in the 4th century BC. These are spells for the “overthrowing of Apophis”, which provide protection from the powers symbolized by this deity or from snakes which could be viewed as minor yet dangerous manifestations of the monster. In the Late Period, these spells were read in temples daily to protect the world from the threat of the sun god’s arch enemy. An associated ritual involved cutting into pieces and burning with fire a wax model of the serpent. Other rituals involved drawing a picture of the serpent in green on a new piece of papyrus, which was then sealed in a box and spat upon for times before being set on a fire.

However, the deceased also needed to be protected from Apophis, and there were references to seventy-seven papyri-rolls which are given to a dead person by means of a spell, containing formulas for bringing Apophis to his place of execution where he is cut up, crushed and consumed by fire.

As a final point, snakes were certainly not seen always a threatening creatures in ancient Egypt, as they seem to have been in other societies. In fact, they were frequently seen as protective and it was Mehen, another snake deity who helped protect the sun god in the underworld. Likewise, it was the cobra goddess Wadjet who helped protect the king.

We have 811 guests and no members online