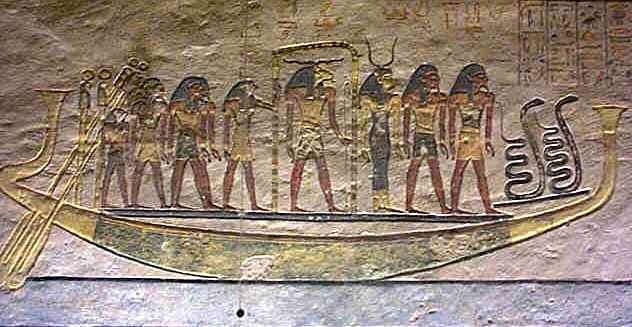 Ra, the Sun God symbolized the creation of every living soul. It was widely believed that Ra was the first being and all the other beings were born later or were his progeny. He is depicted as a man's body with the head of a hawk with an ankh and a scepter in his hands. He was largely worshiped in Heliopolis (Greek for city of the sun) which was the cult place in ancient Egypt.

The Egyptians thought of him as the conqueror of evil and lies by bringing light to this world and also as a symbol of good and truth. The hawk head represents the sun's 'flight' across the horizon. Ra is also shown in a boat called the 'Barque of Ages', sailing across the sky. At the end of the day, he was believed to be traveling in another boat through the Underworld. The sun disk on the head of this Sun God had a cobra around it. Ra was also known by different names representing the various positions of the sun in the sky. 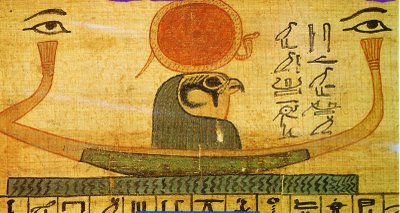 Khepri or Khepera (The Rising Sun)

The rising sun was a symbol of birth and creation. Egyptians believed that the dead were reborn again in the after-life each day with the rising sun. This version or alter-ego was named as Khepri.

The setting sun was a symbol of the passage of the humans from birth up to death.

This name was used only for the noon sun, when it was at the zenith. Some pharaohs proclaimed him as 'Amun-Re', the king of all gods and pharaohs and the leader of the military. His appearance as the head of a hawk and the body of a man was his form for greeting the mortals. 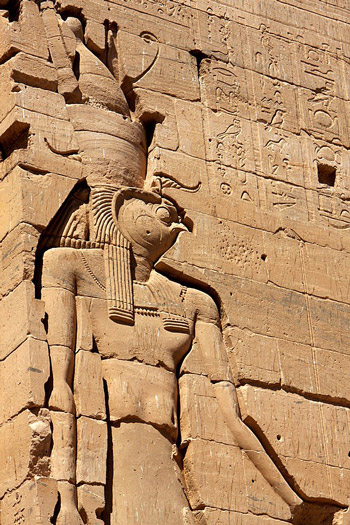 A legend goes that the Sun God Ra divided his body into a number of parts which created the other Egyptian gods. The first creation of his body or his divine children were 'Shu' the god of air or wind, and his wife, Tefnut, the 'spitter' or goddess of rain. He was the grandfather of Geb, the god of the Earth and his wife Nut, the goddess of the sky.

The pharaohs were thought of as Gods, not kings, so that after death they would be united with Ra. Humans were believed to have evolved from the tears of Ra. The temples or complexes built for sun worship were always without a roof, so that the sun could shine through the structure. The pharaoh Amenhotep who reigned during the 14th century BC, promoted the worship of the sun-disk over the other deities. He prohibited the worship of other Gods against the beliefs of Egyptians. This tradition was subsequently curbed by future rulers because it contradicted the Egyptian belief in multiple Gods, a very popular concept religiously followed those days. 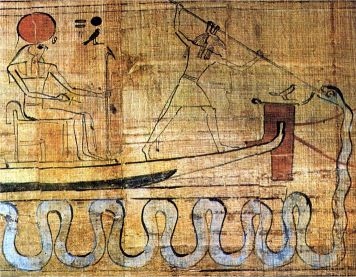 Another popular belief states that Ra traveled the sky through twelve provinces, representing the twelve hours of daylight. At the end of the journey or the dusk, Ra was believed to have been dead and hence embarked on his night voyage. This dead form was referred to as 'Auf' meaning corpse. The day journey was in the Manjet-boat or 'The Barque of Million Years' and the night in the Mesektet boat or night-bark. During the course of his journey, he was believed to have fought many battles with a snake named Apep. The stormy days or an eclipse period was when Ra was defeated by the snake. In the Underworld or the night journey, Auf brought light to the dead souls as he passed through.

In the later Egyptian cultures, the belief was that Ra combined with another Egyptian God Amon and became Amon-Re. He also combined with Horus to become Re-Harakhte. The association of Ra with the Egyptian civilization has existed for a long period of time. Hence, there are a large number of Egyptian myths, legends or stories where there is mention of Ra in different contexts.

However, the fact remains that the Sun God had a prominent place in the ancient Egyptian culture, throughout its history.