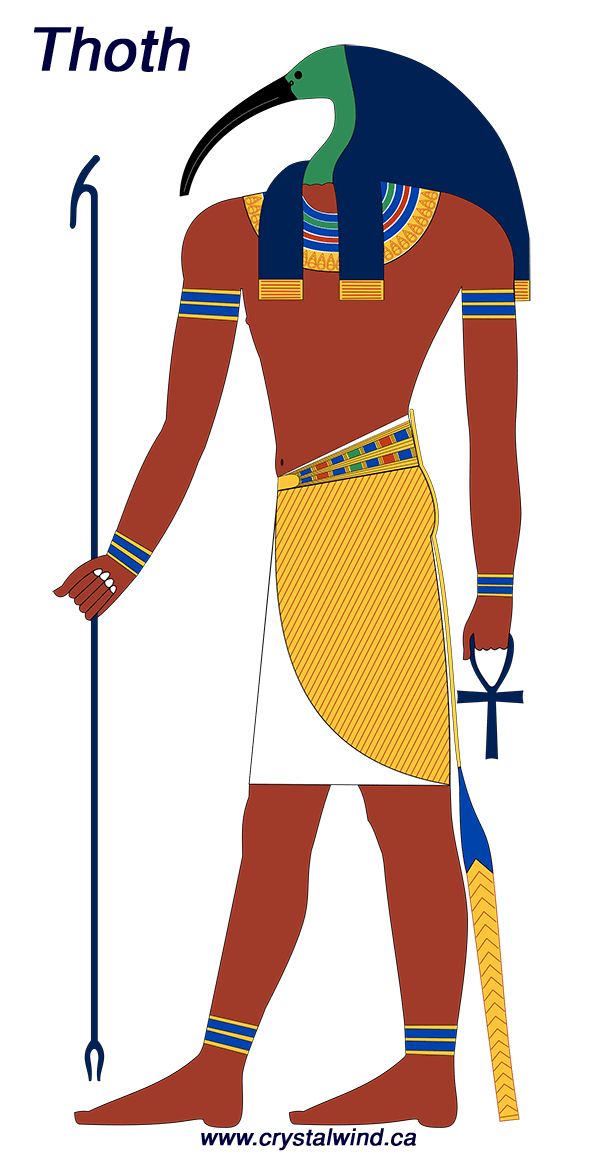 Thoth was one of the earlier Egyptian gods, thought to be scribe to the gods, who kept a great library of scrolls, over which one of his wives, Seshat (the goddess of writing) was thought to be mistress. He was associated by the Egyptians with speech, literature, arts, learning. He, too, was a measurer and recorder of time, as was Seshat. Believed to be the author of the spells in the Book of the Dead, he was a helper (and punisher) of the deceased as they try to enter the underworld. In this role, his wife was Ma’at, the personification of order, who was weighed against the heart of the dead to see if they followed ma’at during their life.

Thoth was usually depicted as an ibis headed man or as a full ibis, or with the face of a dog-headed baboon and the body of a man or, again, as a full dog-headed baboon. The ibis, it is thought, had a crescent shaped beak, linking the bird to the moon. The dog-headed baboon, on the other hand, was a night animal that was seen by the Egyptians who would greet the sun with chattering noises each morning just as Thoth, the moon god, would greet Ra, the sun god, as he rose.

In keeping with his many attributes, he was depicted with a variety of symbols. As a god of Egypt, he carried the ankh, the symbol of life, in one hand, and in the other he held a scepter, the symbol of power. In the ‘Book of the Dead’, he was shown holding a writing palette and reed pen to record the deeds of the dead. As voice of the sun-god Ra, he carried the utchat, or Eye of Ra, the symbol of Ra’s ubiquitous power. Thoth was variously depicted wearing a crescent moon on his headdress, or wearing the Atef crown, or sometimes, the crown of Upper and Lower Egypt.

The wisest of the Egyptian gods was Thoth (Djhuty, Djehuty, Tehuty), the baboon and ibis god of the moon. Thoth was the god who overcame the curse of Ra, allowing Nut to give birth to her five children, with his skill at games. It was he who helped Isis work the ritual to bring Osiris back from the dead, and who drove the magical poison of Set from her son, Horus with the power of his magic. He was Horus’ supporter during the young god’s deadly battle with his uncle Set, helping Horus with his wisdom and magic. It was Thoth who brought Tefnut, who left Egypt for Nubia in a sulk after an argument with her father, back to heaven to be reuinted with Ra.

Tefnut, the Eye of Ra, became estranged from her father and fled into Nubia, taking all of her precious water with her. In this land, she transformed herself into a lioness. She raged through the countryside, emitting flames from her eyes and nostrils. Viciously, she drank the blood and fed on the flesh of both animals and humans. As time went on, Ra missed his Eye, and longed to see her again – Egypt had dried, and the land was in chaos. He summoned Shu to him, along with Thoth, who was the messenger of the gods and famous for his eloquence. Ra issued the command that Shu and Thoth must go to Nubia and bring back his recalcitrant daughter. Before they set off on their journey Shu and Thoth disguised themselves as baboons. The baboon is an animal sacred to Thoth. Eventually, Thoth and Shu found Tefnut in Begum. Thoth began at once to try and persuade her to return to Egypt. Tefnut, however, wasn’t interested. She liked hunting in the desert and was perfectly happy where she was. Thoth would not give up though, and wove stories to depict to her how gloom had descended upon Egypt since she had left. The people of Egypt would do anything for her if she’d just return home. Ultimately, wooed by Thoth’s promises, Tefnut relented and returned to Egypt accompanied by the two baboons. All the way there, Thoth kept her entertained with stories. Tefnut made a triumphant entry back into the homeland, accompanied by a host of Nubian musicians, dancers and baboons. She went from city to city, bringing back moisture and water, amid great rejoicing, until finally she was reunited with her father, and restored to her rightful position as his Eye. 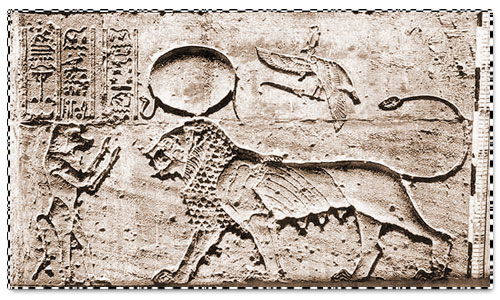 When Ra retired from the earth, he appointed Thoth and told him of his desire to create a Light-soul in the Duat and in the Land of the Caves, and it was over this region that the sun god appointed Thoth to rule, ordering him to keep a register of those who were there, and to mete out just punishments to them. Thoth became the representation of Ra in the afterlife, seen at the judgement of the dead in the ‘Halls of the Double Ma’at’.

The magical powers of Thoth were so great, that the Egyptians had tales of a ‘Book of Thoth’, which would allow a person who read the sacred book to become the most powerful magician in the world. The Book which “the god of wisdom wrote with his own hand” was, though, a deadly book that brought nothing but pain and tragedy to those that read it, despite finding out about the “secrets of the gods themselves” and “all that is hidden in the stars”. 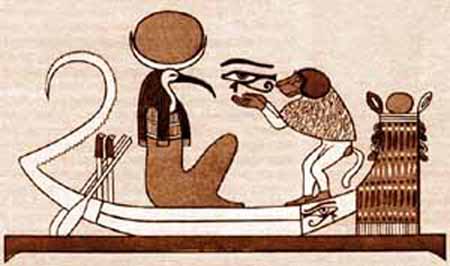 Originally, Thoth was a god of creation, but was later thought to be the one who civilized men, teaching them civic and religious practices, writing, medicine, music and magic. He took on many of the roles of Seshat, until she became a dual, female version of Thoth.

The god of learning was also reputed to have been a god of measuring the passage of time, and thus the god of the Egyptian calendar. It is interesting to note that although he is related to the solar calendar in myth (where he won five extra days a year from Khonsu, the moon god), but that as a moon god himself, he was very probably closely related to Egypt’s original lunar calendar:

“…Researchers of the ancient Egyptian calendar agree that the solar calendar of 360 + 5 days was not the first prehistoric calendar of that land. This ‘civil’ or secular calendar was introduced only after the start of dynastic rule in Egypt, i.e., after 3100 BC; according to Richard A. Parker (The Calendars of the Ancient Egyptians) it took place circa 2800 BC ‘probably for administrative and fiscal purposes’. This civil calendar supplanted, or perhaps supplemented at first, the ‘sacred’ calendar of old. In the words of the Encyclopaedia Brittanica, ‘the ancient Egyptians originally employed a calendar based on the Moon’. According to R. A. Parker (Ancient Egyptian Astronomy) that earlier calendar was, ‘like that of all ancient peoples’, a calendar of twelve lunar months plus a thirteenth intercalary month that kept the seasons in place.” - Zecharia Sitchin, When Time Began

Thoth’s centre of worshiped was at Khmunu (Hermopolis) in Upper Egypt, where he was the creator god, in Ibis form, who laid the World Egg. The sound of his song was thought to have created four frog gods and snake goddesses who continued Thoth’s song, helping the sun journey across the sky.

He was the ‘One who Made Calculations Concerning the Heavens, the Stars and the Earth’, the ‘Reckoner of Times and of Seasons’, the one who ‘Measured out the Heavens and Planned the Earth’. He was ‘He who Balances’, the ‘God of the Equilibrium’ and ‘Master of the Balance’. ‘The Lord of the Divine Body’, ‘Scribe of the Company of the Gods’, the ‘Voice of Ra’, the ‘Author of Every Work on Every Branch of Knowledge, Both Human and Divine’, he who understood ‘all that is hidden under the heavenly vault’. Thoth was not just a scribe and friend to the gods, but central to order – ma’at – both in Egypt and in the Duat. He was ‘He who Reckons the Heavens, the Counter of the Stars and the Measurer of the Earth’. 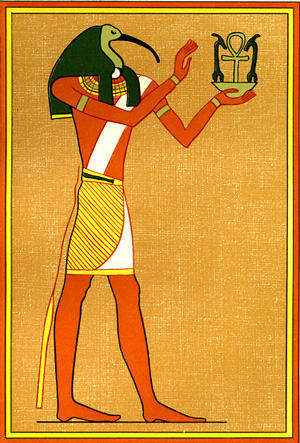 Facts about Thoth God of Egypt

We have 1025 guests and no members online