Isis, Egyptian Goddess of Magic and Giver of Life 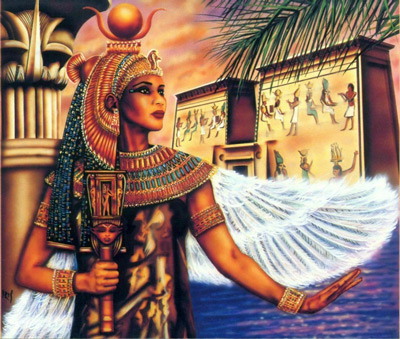 Isis, the Egyptian goddess of rebirth remains one of the most familiar images of empowered and utter femininity. The goddess Isis was the first daughter of Geb, god of the Earth, and Nut, the goddess of the Overarching Sky. Isis was born on the first day between the first years of creation, and was adored by her human followers.

Unlike the other Egyptian goddesses, the goddess Isis spent time among her people, teaching women how to grind corn and make bread, spin flax and weave cloth, and how to tame men enough to live with them (an art form on which many of us would welcome a refresher course!)

Isis taught her people the skills of reading and agriculture and was worshipped as the goddess of medicine and wisdom.

More than any other of the ancient Egyptian goddesses, Isis embodied the characteristics of all the lesser goddesses that preceded her. Isis became the model on which future generations of female deities in other cultures were to be based.

As the personification of the "complete female", Isis was called "The One Who Is All", Isis Panthea ("Isis the All Goddess"), and the "Lady of Ten Thousand Names".

The goddess Isis, a moon goddess, gave birth to Horus, the god of the sun. Together, Isis and Horus created and sustained all life and were the saviors of their people. 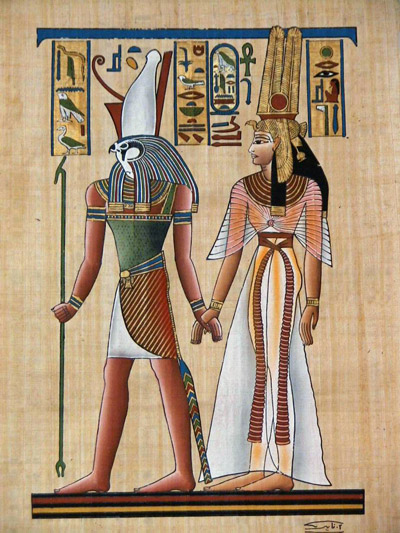 Isis became the most powerful of the gods and goddesses in the ancient world. Ra, the God of the Sun, originally had the greatest power. But Ra was uncaring, and the people of the world suffered greatly during his reign.

The goddess Isis tricked him by mixing some of his saliva with mud to create a poisonous snake that bit him, causing him great suffering which she then offered to cure. He eventually agreed.

Isis informed Ra that, for the cure to work, she would have to speak his secret name (which was the source of his power over life and death). Reluctantly, he whispered it to her.

When Isis uttered his secret name while performing her magic, Ra was healed. But the goddess Isis then possessed his powers of life and death, and quickly became the most powerful of the Egyptian gods and goddesses, using her great powers to the benefit of the people. 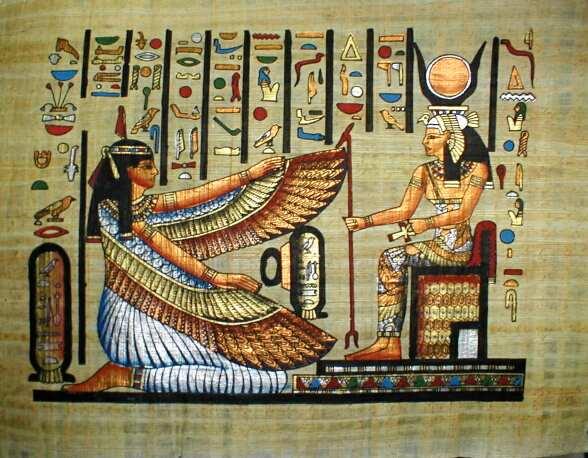 Isis was called the Mother of Life, but she was also known as the Crone of Death. Her immense powers earned her the titles of "The Giver of Life" and "Goddess of Magic". Her best known story illustrates why she is simultaneously known as a creation goddess and a goddess of destruction.

Isis was the Goddess of the Earth in ancient Egypt and loved her brother Osiris. When they married, Osiris became the first King of Earth. Their brother Set, immensely jealous of their powers, murdered Osiris so he could usurp the throne.

Set did this by tricking Osiris into stepping into a beautiful box made of cedar, ebony and ivory that he had ordered built to fit only Osiris. Set then sealed it up to become a coffin and threw it into the river. The river carried the box out to sea; it washed up in another country, resting in the upper boughs of a tamarisk tree when the waters receded.

As time passed, the branches covered the box, encapsulating the god in his coffin in the trunk of the tree.

In a state of inconsolable grief, Isis tore her robes to shreds and cut off her beautiful black hair. When she finally regained her emotional balance, Isis set out to search for the body of her beloved Osiris so that she might bury him properly. 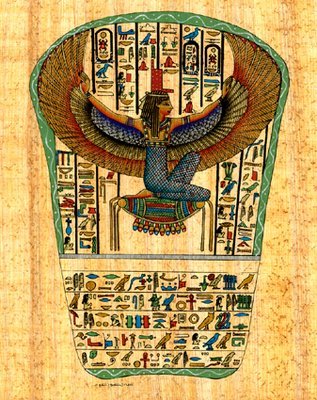 The search took Isis to Phoenicia where she met Queen Astarte. Astarte didn't recognize the goddess and hired her as a nursemaid to the infant prince.

Fond of the young boy, Isis decided to bestow immortality on him. As she was holding the royal infant over the fire as part of the ritual, the Queen entered the room. Seeing her son smoldering in the middle of the fire, Astarte instinctively (but naively) grabbed the child out of the flames, undoing the magic of Isis that would have made her son a god.

When the Queen demanded an explanation, Isis revealed her identity and told Astarte of her quest to recover her husband's body. As she listened to the story, Astarte realized that the body was hidden in the fragrant tree in the center of the palace and told Isis where to find it.

Sheltering his broken body in her arms, the goddess Isis carried the body of Osiris back to Egypt for proper burial. There she hid it in the swamps on the delta of the Nile river.

Unfortunately, Set came across the box one night when he was out hunting. Infuriated by this turn of events and determined not to be outdone, he murdered Osiris once again . . . this time hacking his body into 14 pieces and throwing them in different directions knowing that they would be eaten by the crocodiles.

The goddess Isis searched and searched, accompanied by seven scorpions who assisted and protected her. Each time she found new pieces she rejoined them to re-form his body. 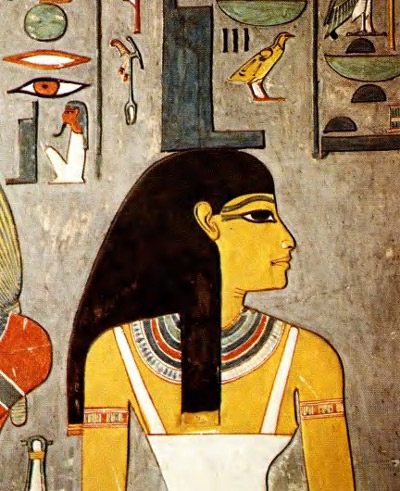 But Isis could only recover thirteen of the pieces. The fourteenth, his penis, had been swallowed by a crab, so she fashioned one from gold and wax. Then inventing the rites of embalming, and speaking some words of magic, Isis brought her husband back to life.

Magically, Isis then conceived a child with Osiris, and gave birth to Horus, who later became the Sun God. Assured that having the infant would now relieve Isis' grief, Osiris was free to descend to become the King of the Underworld, ruling over the dead and the sleeping.

His spirit, however, frequently returned to be with Isis and the young Horus who both remained under his watchful and loving eye.

There are many other variations of this myth . . . in some Isis found the body of Osiris in Byblos, fashioned his penis out of clay. In others the goddess consumed the dismembered parts she found and brought Osiris back to life, reincarnating him as her son Horus.

In one of the most beautiful renditions, Isis turns into a sparrow hawk and hovers over the body of Osiris, fanning life back into him with her long wings.

Regardless of the differences, each version speaks of the power over life and death that the goddess Isis symbolizes. . . the deep mysteries of the feminine ability to create and to bring life from that which is lifeless.

The Egyptian goddess Isis played an important role in the development of modern religions, although her influence has been largely forgotten.

The festivities surrounding the flooding of the Nile each year, originally named "The Night of the Tear-Drop" in remembrance of the extent of the Isis' lamentation of the death of Osiris, her tears so plentiful they caused the Nile to overflow, is now celebrated annually by Egyptian Muslims and is called "The Night of the Drop".

She was worshipped throughout the Greco-Roman world. During the fourth century when Christianity was making its foothold in the Roman Empire, her worshippers founded the first Madonna cults in order to keep her influence alive.

Some early Christians even called themselves Pastophori, meaning the shepherds or servants of Isis. . . which may be where the word "pastors" originated. The influence of Isis is still seen in the Christian ikons of the faithful wife and loving mother.

Indeed, the ancient images of Isis nursing the infant Horus inspired the style of portraits of mother and child for centuries, including those of the "Madonna and Child" found in religious art.

The power of the goddess Isis in the "public arena" was also profound. Her role as a guide to the Underworld, was often portrayed with winged arms outstretched in a protective position. The image of the wings of Isis was incorporated into the Egyptian throne on which the pharaohs would sit, the wings of Isis protecting them.

The ancient Egyptian goddess Isis has many gifts to share with modern women. Isis embodies the strengths of the feminine, the capacity to feel deeply about relationships, the act of creation, and the source of sustenance and protection.

At times Isis could be a clever trickster empowered by her feminine wiles rather than her logic or brute strength, but it is also the goddess Isis who shows us how we can use our personal gifts to create the life we desire rather than simply opposing that which we do not like.

The myths of Isis and Osiris caution us about the need for occasional renewal and reconnection in our relationships. Isis also reminds us to acknowledge and accept the depths of our emotions. 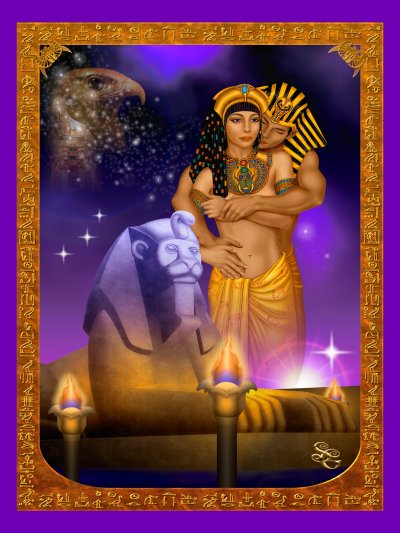 The goddess Isis is often represented by symbols associated with her distinctly feminine but courageous and perseverant nature, or with her association with death and resurrection. It is hardly surprising that many of our icons representing feminine strength and passionate emotions, including the image of Madonna and Child in works of art, are derived from the ancient goddess symbols of the Egyptian goddess Isis. 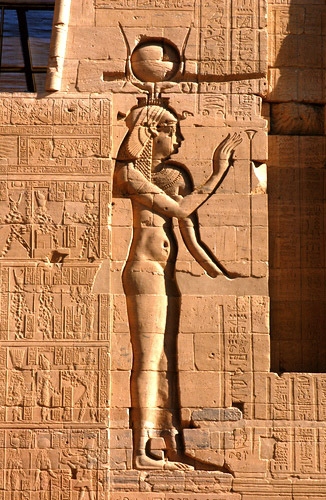