The Triad of Memphis 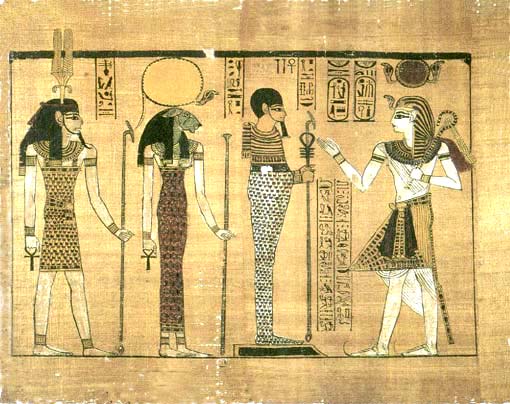 Built by the kings of the First Dynasty, Memphis had been the capital city of Egypt around 3000 BC, after the unification of Upper and Lower Egypt. Though not much has survived from ancient Memphis, little remains– including scattered statues, alabaster beds, gigantic sarcophagi, sphinxes, and temples– provide clues to the religious life of the city.

At the reduction of influence of gods of Heliopolis, about the fifth and sixth dynasties, the gods of Memphis started to take a new character. As first principle, creator, 'father of gods’, and head of a triad (that included his consort Sekhmet and their son Nefertem), god Ptah (who was believed to have had international political powers) was combined with the gods of Heliopolis. Since Horus was an ingredient of god Ptah, the latter was made a supreme god when the former became the god of both Upper and Lower Egypt (after wars between him and Seth were brought to an end) .

Ptah is the creator-god of Memphis, the city that served as the capital of the ancient Egypt for most of its history and which was known, during that history, as Het-ka-Ptah or "House of the Soul of Ptah". Ptah is one of several Egyptian deities attributed with a myth about fashioning creation. Ptah, as the god Ta-tenen (the primordial mound), creates in the so-called "Memphite Theology" the world, its inhabitants, and the kas (or spirits) of the other gods.

A patron of craftsmen, Ptah's name means "Creator". He is depicted as a mummified man with only his hands free to grasp a sceptre composed of the symbols of life (ankh), power (was), and stability (djed). He is also typically shown wearing a skullcap and standing on the plinth-shaped hieroglyph that is part of the name for Ma'at, the goddess of fundamental truth.

Another deity of Memphis, the funerary god Sokar, was also a patron to craftsmen, and seems to have divided his labor with Ptah: where Ptah was closely associated with stone-working, Sokar was closely associated with metal-working. In the Later Period, Ptah and Sokar would become syncretized with Osiris to form Ptah-Seker-Osiris, a composite deity invoking the properties exhibited by all three: creation, stasis, and the afterlife. In Heliopolis, this triad would be known as Ptah-Sokar-Atum, but hailed as Osiris.

Ptah's wife is usually Sekhmet or, less commonly, Bastet. Gods attributed as his children are Nefertem, Imhotep (a deified architect of the Old Kingdom), and Maahes. Apis, the bull of Memphis, was associated with Ptah as his oracle.

From the Memphite Theology:

"Thus it is said of Ptah: 'He who made all and created the gods.' And he is Ta-tenen, who gave birth to the gods, and from whom every thing came forth, foods, provisions, divine offerings, all good things. Thus it is recognized and understood that he is the mightiest of the gods. Thus Ptah was satisfied after he had made all things and all divine words." 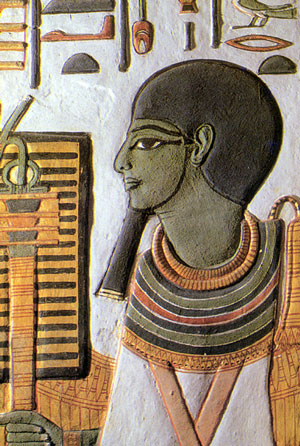 A fiery and destructive Egyptian goddess associated with war and divine vengeance. Her name means "the Mighty One" and she was depicted as a woman with the head of a lioness. Her main center of worship was the Old Kingdom capital of Memphis. It was there that she was worshipped as a member of a divine triad with her husband Ptah and her son Nefertem. She was also worshipped in Luxor.

According to a tale known as "The Destruction of Mankind" Sekhmet was the "Eye of Re", a vengeful aspect of the usually benevolent goddess Hathor. The sun god Re sent Sekhmet to slay mortals who were plotting against him. Sekhmet became so enthusiastic about her task that she nearly slew all of humanity. Re prevented this by tricking her into drinking vast quantities of beer which had been colored to look like blood. The intoxicated goddess had to abandon the slaughter and humanity was saved.

As goddess of war Sekhmet was often said to accompany Pharaoh into battle. The King at war was described as being like Sekhmet in her fury, and the goddess aided him by shooting arrows at his enemies. She was also the "Lady of Pestilence" who could send plague and disease. She was also revered as a healer of these ailments, a role which seems paradoxical in such a bloodthirsty deity. 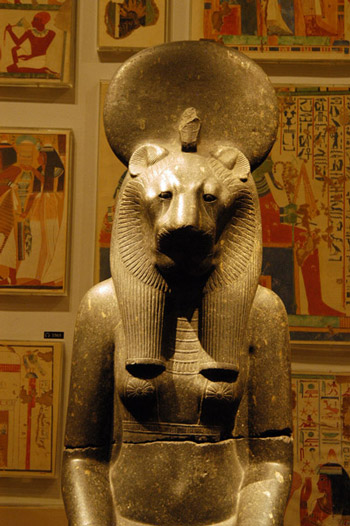 An ancient Egyptian god identified with the lotus, but he also personified some form of the morning sun. He is a son of Ptah and Sekhmet or Bastet. Nefertem is usually represented as a man with a cluster of lotus flowers upon his head, but sometimes he has the head of a lion. In the little faïence figures of him, which are so common, he stands upon the back of a lion. He represents the sun-god in the legend which made him burst forth from a lotus, for in the pyramid of Unas the king is said: "Rise like Nefer-Temu from the lotus (lily) to the nostrils of Ra" and to "come forth on the horizon every day." 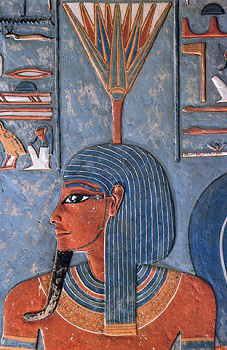 The Egyptian god of the Memphis necropolis, and a funerary god. In the Old Kingdom, Seker came to be regarded as a manifestation of the dead Osiris at Abydos in Upper Egypt. Also during this time, he came to be syncretized with Ptah as Ptah-Seker, in which form he took the lioness goddess Sekhmet as his consort. In the Middle Kingdom, the three were sometimes merged in the form Ptah-Seker-Osiris. As god of the necropolis, Seker is also the patron of the craftsmen who are put to work there. He was associated with the manufacture of various objects used in embalming and in funerary rituals.

He also played a prominent role at Thebes where he was depicted on the royal tombs. An important annual festival was held in his honor at Thebes. The festival celebrated the resurrection of Osiris in the form of Seker and the continuity of the Egyptian monarchy. At this festival his image was carried in an elaborate boat known as the henu. (A depiction of such a festival can be found on the walls of an inner court of the temple of Ramses III at Medinet Habu, mid 12th century BCE.)

Seker is portrayed in human form with the head of a hawk. He is called Socharis by the Greeks. 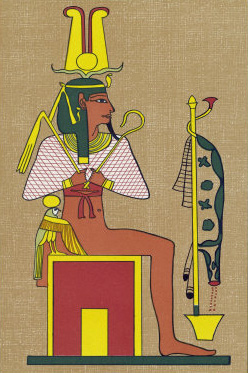 In Egyptian mythology, Imhotep was the architect, physician, sage, astrologer, scribe, and chief minister of the Pharaoh Djoser, who reigned from 2630 - 2611 BCE. He designed the first pyramid (the Step Pyramid at Sakkara. The Greeks equited Imhotep with their Asclepius. 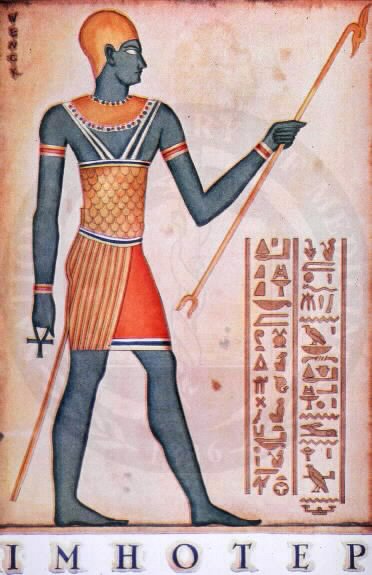 A somewhat obscure leonine god who may be of foreign origin, Maahes (whose name has been translated to mean "True Before Her") was worshipped in both Bubastis (or, in Egyptian, Per-Bast, the cult center of Bast), Leontopolis (also the cult center of Tefnut and Shu as twin lions), and especially Upper Egypt (perhaps through confusion with the Nubian lion-god Apedemak). Maahes is regarded in later times to be the son of Bastet and Ptah in Memphis.

Maahes (also called "Lord of the Massacre") punished the transgressors of Ma'at and was represented as either a lion or a man with a lion's head and a knife. His protection was invoked over the innocent, and he is sometimes regarded as a son of the triad in Memphis alongside Nefertem and occasionally Imhotep. The Greeks pronounced his name as either Mihos or Miysis. 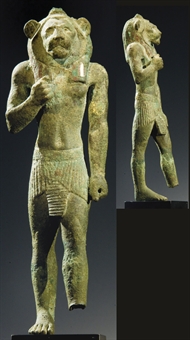 Apis was the holy bull or bull god of Memphis. Any bull found bearing a white triangle on its forehead and otherwise totally black, was considered to be the personification of Apis. Priest derived omens from his behavior. The bull was not allowed to live past 25 years and upon reaching this age it was drowned and a new bull was sought. If it died before that time, it was buried with much ceremony at Sakkarah, south of Cairo. The apis cult was later closely connected with the god Ptah, but was also widespread among the Greeks and Romans. 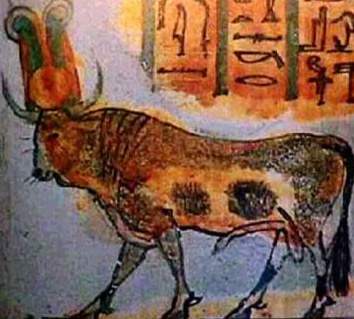 We have 1181 guests and no members online