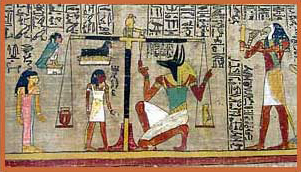 Anubis (Inpew, Yinepu, Anpu) was an ancient Egyptian god of the underworld who guided and protected the spirits of the dead. He was known as the ‘Lord of the Hallowed Land’ – the necropolis – and Khenty Amentiu, ‘Foremost of the Westerners’ – the Land of the Dead was thought to be to the west, where the Egyptians buried their dead. (Khenty Amentiu was the name of a previous canine deity who was superseded by Anubis.) The worship of Anubis was an ancient one – it was probably even older than the worship of Osiris. In the pyramid texts of Unas, his role was already very clear – he was associated with the Eye of Horus and he was already thought to be the guide of the dead in the afterlife, showing them the way to Osiris. In the text, it was written that “Unas standeth with the Spirits, get thee onwards, Anubis, into Amenti, onwards, onwards to Osiris.”

He was generally depicted as a black jackal-headed man, or as a black jackal. The Egyptians would have noticed the jackals prowling around the graveyards, and so the link between the animal and the dead was formed in their minds. Anubis was painted black to further link him with the deceased – a body that has been embalmed became a pitch black color. Black was also the color of fertility, and thus linked to death and rebirth in the afterlife. 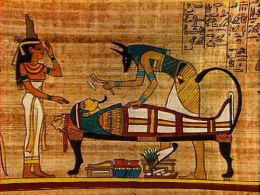 Anubis was also seen as the deity of embalming, as well as a god of the dead. To the Egyptians, Anubis was the protector of embalming and guardian of both the mummy and the necropolis.

Anubis was often identified by the word sab, ‘jackal’ rather than ‘dog’ (iwiw). Though to the Egyptians there was not a great deal of difference between the two canines, so there is some confusion over which animal Anubis actually was. The animal is sometimes referred to as the ‘Anubis animal’ as it is unknown which exact species of canine that Anubis actually was based on.

When the Osiris worship came to power, Osiris took over many of Anubis’s jobs as caretaker and protector of the dead. As this happened, Anubis became ‘He Who is Before the Divine Booth’, the god of embalming who presided over the funerary rituals. The funerary priests would wear a mask of the jackal god during the mummification process, symbolically becoming the god for the rituals.

The preliminary stages of mummification involved the opening – the violation – of the body, an action that only Anubis himself would have been allowed to perform. The priest who took on this role was called the ‘Overseer of the Mysteries’ (hery seshta). It was thought that he would be magically become the funerary god himself and so be able to legitimately cut open the corpse for the mummification process.

He is sometimes called the son of Nephthys and Set or of Nephthys and Osiris. In one train of thought, it was believed that Isis raised him, as Set might murder his wife’s illegitimate son, and so he grew up a friend and follower of Osiris. He was thought to have a daughter known as Kebechet (Kabechet, Kebehut), who was depicted as a snake or ostrich carrying water. She was the goddess of freshness and purification through water who washed the entrails of the deceased and brought the sacred water to Anubis for his tasks. She was thought to give water to the spirits of the dead while they waited for the mummification process to be complete. She was probably related to mummification where she would fortify the body against corruption, so it would stay fresh for reanimation by the deceased’s ka.

It was believed that Anubis was the one who invented the process of mummification. Anubis helped Isis bring her husband back to life again after Set had killed him. He embalmed the body of the god, swathed it in the linen cloths that had been woven by the twin goddesses, Isis and Nephthys, making sure that the body would never decay or rot. 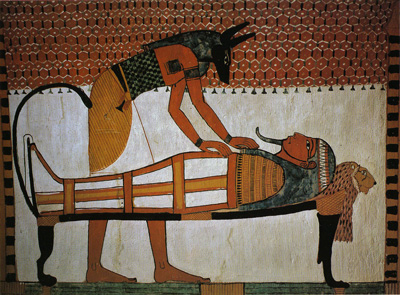 The wakening of the dead was also thought to be a function of Anubis. He would appear by the mummy, and awaken the soul. The mummy was removed from the sarcophagus when it arrived at the door of the tomb and was placed upright against the wall by a priest wearing the mask of Anubis, thought to have become the god himself. The ‘Opening of the Mouth’ ceremony was then performed. It consisted of a number of rituals that would turn the mummy (or a statue of the dead) into an inhabitable vessel for the deceased’s ka. The ceremonies involved purification, sensing and anointing of the mummy along with incantations. The mummy was touched by ritual objects on various body parts to restore the senses – the spirit would then be able to see, hear, speak and eat as a living being. Some of the tools for this ritual have been found in predynastic Amratian graves, so it is probable that at least some of the rituals involved in the ‘Opening of the Mouth’ had evolved from this early time.

After the deceased had been placed into the tomb and sealed up, it was thought that Anubis would lead the deceased to the afterlife, along with another god, Wepwawet (Upuaut). The two are very similar, though Wepwawet was also another ancient jackal or wolf god, appearing on the Narmer palette. He was not just a god of the dead, but he was a warrior god who opened the way to victory for the pharaoh. The ‘Opener of the Ways’ helped Anubis to guide the dead to the Halls of Ma’ati. It was here that Anubis, as ‘He Who Counts the Hearts’, watched over of the weighing of the heart and the judging of the deceased. Here it was his duty to see that the beam of the scales was in its proper place, and that the weighing was done correctly. He would then pass judgment on the deceased and Thoth would record the pronouncement. Anubis would protect the innocent from the jaws of Ammut, but would give the guilty to her to meet the final death. 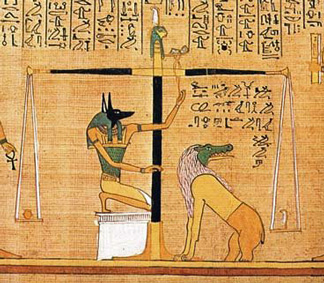 A strange fetish, known as the imiut fetish, was linked to Anubis. It was a headless stuffed skin (usually of a great feline), tied by its tail to a pole which was planted in a pot. Known as the ‘Son of the hesat-Cow’ (the cow that produced the Mnevis bull was linked to the cow goddess Hesat), another title of Anubis, there is evidence of this fetish as early as the 1st Dynasty. They were linked to the funerary cult, depicted in the Chapel of Anubis at Hatshepsut’s mortuary temple and actual golden fetishes being left in the tomb of Tutankhamen. These emblems of Anubis were placed at the western ends of the corridors, one on each side of the outermost shrine at Tutankhamen’s tomb. The pots were made of Egyptian ‘alabaster’ and the poles represented the water lily water lily (lotus) stem and bud while the tip of the skin’s tail had a papyrus flower attached and the pole and fetish itself were gilded. Other fetishes have been found made of real animal skin that have been wrapped in bandages. In early times there was a god, Imiut, who was known as ‘He Who is in His Wrappings’ who became a form of Anubis. The fetish was probably linked with mummy wrappings though it also appears to have been related to the royal jubilee festival.

To the east of Ankh-Tawy (Saqqara) there was a place known as Anubeion, one of Anubis’ cult centers. The burials of mummified dogs and jackals took place there. Although he was worshiped all over Egypt, he had other cult centers at Abt, the 12th Nome, Zawty (Asyut) and the city of Hardai (Cynopolis) in the 17th Nome where a vast number of dog mummies were buried at dog cemeteries.

As protector of the necropolis, Anubis was known as ‘He Who is Upon the Mountain’. The Egyptians believed that the god would keep watch over the tombs and graves from a high vantage point in the desert, ready to rush down to protect the deceased from desecration. Images of Anubis as a seated jackal above nine prisoners were stamped on many of the seals to tombs in the Valley of the Kings. They symbolize Anubis’ protection against thieves and evil doers who entered the necropolis. He protected not only the souls of the dead, but their eternal resting place, too. 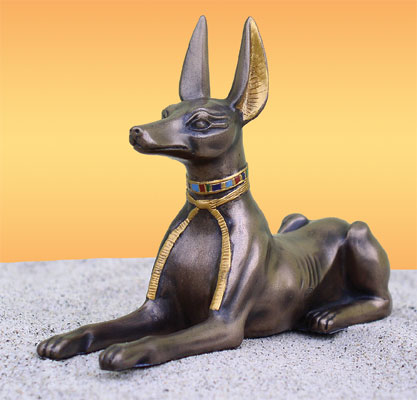 We have 1118 guests and no members online