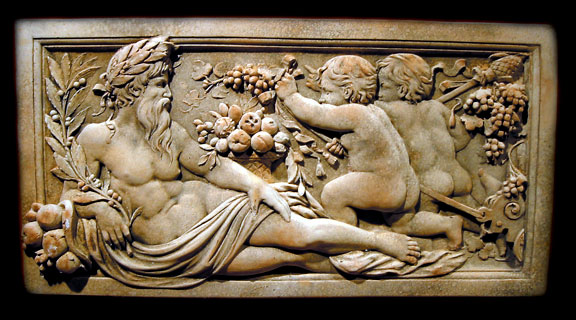 The God is a life force, an impregnator. He initiates change and action, he is movement and purpose. The God is neither the stern, all powerful deity of Christianity, nor is he "just" the consort of the Goddess. The God and Goddess are equal, for without one we could not have the other.

The God is the Sun, shining through the day, rising and setting in the endless cycle which rules our lives. Without the Sun we could not exist, therefore it has been revered as the source of all life. His force surges with each spring blossom, each new tree and life. He empowers and protects the creations of the Goddess.

Shown as the Horned God he is phallic and fierce. He is the tender of wild animals and is sometimes seen wearing horns on his head, symbolizing his connection with these animals, In earlier times, hunting was one of the activities thought to be ruled by the God.

The God as Son and Lover is dual, being both created and the creator. He is also seen as the Sun that dies each year in winter and reborn as Spring approaches. Many mythologies celebrate the death and rebirth of the solar hero or Sun God. He represents all that is vital, and is a wise comforter and master of secret lore. With the Goddess he also celebrates and rules sex.

Adonis is the Greek consort of Aphrodite. Adonis is also another name for lord. In Phoenician his counterpart is Astarte. He is a vegetation god and his Roman counterpart is Venus.

Apollo is the Greek and Roman god of sun, light and the arts. He is the twin brother of Artemis.

Bacchus is the Roman god of wine and intoxication. He is equated with the roman god Dionysus. His festival is celebrated on March 16th and 17th. Bacchus is also identifies with the old Italian god Liber.

Cernunnos is the horned god of the Celts, associated with the hunt and fertility. He was sometimes portrayed with serpents legs, a man's torso and the head of a bull or ram; or he was shown with stags or wearing stags antlers. Cernunnos was the ruler of the underworld or otherworld, the opener of the gates between life and death. The name Cernunnos means "The Horned".

Dionysus appears to be a god of two distinct origins. Dionysus was the god of wine, agriculture and fertility of nature, he is also the patron god of the Greek stage. He also represents the outstanding features of mystery religions.

Faunus is the Roman nature god of the forest, wildlife and fertility. He was consort to Fana and an aspect of Tanus.

Helios is the young Greek god of the sun. Each dawn Helios rises from the ocean in the East and rides his chariot pulled by four horses through the sky to descend at night in the West. Helios sees and knows all. Helios is portrayed as a youth with a halo, standing in a chariot and occasionally with a long flowing cloak. His attributes are the whip and the glove and his sacred animals are the cock and eagle.

Hermes is the Greek god of riches, trade and good fortune, he is also the messenger of the gods. He is the son of Zeus and Maia. Hermes was an early fertility god, and crude phallic images called HERMAE, were set up at crossroads and in front of peoples homes. He carries the Herald's staff, intertwined with ribbons or serpents and his roman counterpart is Mercury.

Hymen is the Greek god of marriage and commitment. His counterpart is Dionysus.

Lugh is a heroic solar deity of Irish mythology. He continues to be recognised in the Sabbat observance of his festival day, LUGNASADH on August 1st.

Mercury is the Roman god of trade and profit, merchants and travellers. In later times he was equated with the Greek god Hermes. The attributes of Mercury is a staff with two intertwined snakes and a purse. He is portrayed similarly to Hermes: dressed in a wide flowing cloak, winged sandals and a winged hat.

In Norse and German mythology, Odin is the one-eyed patriarch of gods, he is also the god of wisdom. Odin has an insatiable thirst for knowledge. He created the arts and was a powerful magician, sorcerer and healer. Odin could change his shape at will and loved adventure, he often flew through the sky on an eight-legged horse. He frequently travelled among mortals disguised as a wanderer.

Osiris is an Egyptian god who enjoyed his greated popularity as god of the dead. Originally Osiris was a nature spirit, embodied in the crops that die in harvest and are reborn again each spring. Osiris's symbol is the sun.

Pan is the Greek pastoral deity of flocks and herds, who is half man and half goat, with legs, horns and beard of a goat. His symbol is the phallus and he is invoked for fertility of flick or an abundant hunt. Every region in Greece had its own Pan who was known by many different names, and Pan eventually came to symbolise the universal god. Pan is recognised in Neo-Paganism and Neo-Pagan Witchcraft and is an aspect of the Horned God.

Poseidon is the Greek god of the sea. His familiars are dolphins and horses.

Thor is the norse god of the sky and thunder. He is a kindle god of common people, including farmers and sailors.

Thoth is the Egyptian god who created the universe and all mystical wisdom, magick, learning, writing, arithmetic and astrology. The Greeks associated their god Hermes so closely with Thoth that the two blended together. Thoth/Hermes became identified with the HERMES TRISMEGISTUS a mythical figure who was the patron of magicians and the alleged author of the Hermetic books on occult, philosophical and religious subjects.

Zeus is the youngest son of Cronus and Rhea, he was the supreme ruler of Mount Olympus and of all the Pantheon gods who resided there. He was the spirtual leader of both gods and men, and being the supreme ruler, he upheld law, justice and morals. Zeus was a celestial god, and was originally worshipped as a weather god by the Greeks. His main attribute is the thunderbolt and he controlled thunder, rain and lightning. Zeus is portrayed as a bearded, middle aged man, but with a youthful figure. He was always portrayed as a very regal and imposing figure.

We have 821 guests and no members online