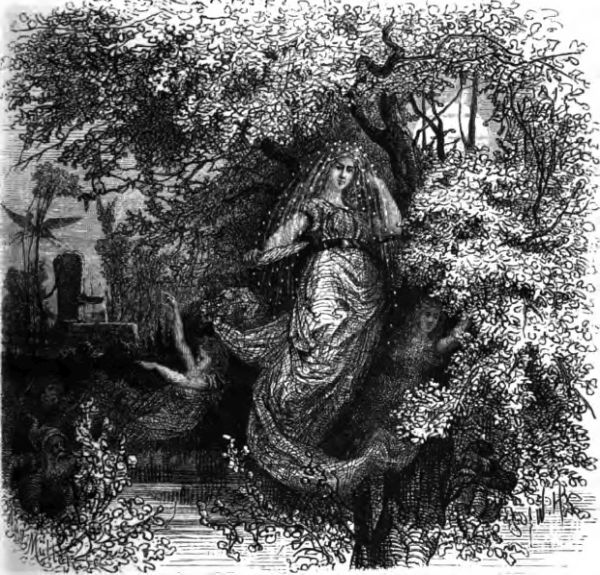 Mother Holda (Frau Holda) is a highly revered and very misunderstood Teutonic Goddess. In old German households she brought on Winter, rewarded the industrious and carried infants that died to the Heavens. She is a symbol of virtue and hard work. Holda is perhaps the only Teutonic Goddess whose worship survived until today. Her association with the home and women may be what caused her to be much maligned in modern times. I hope her story here helps bring her back into the Light.

Holda means “gracious one”. She resides in the sky, riding her chariot through the night. Her chariot is pulled by many animals of the wood and she is accompanied by the infants that died before they were named. She is seen as a beautiful woman with long white hair bathing in a clear pool to the good hearted and hard working. But to the lazy and unkind she appears as a wizened old woman. She is sometimes seen as a woman with two faces; one young and beautiful, one old and stern. In either manifestation, she is not a lithe spirit. She is of sturdy stock, at par with her sisters to the North. .

Protector of the Home

Holda is protector of the household and patron of the housewife and mother. She holds hard work above all else. Spinning, being the main industry of the housewife, is her favourite pastime. She promotes the independence of housewives. Before the industrial revolution, spinning and selling their goods was the only way housewives could get money of their own. “It is hard for us to understand the central importance that spinning played in the lives of women before the Industrial Revolution” writes Paxson (4). Women would pray to Holda to help in this endeavour. There are many ancient tales (pre-Brothers Grimm) where Holda brought reward to the hardworking and virtuous, fertility to the fields and animals and protection to women and children.

Thorn writes, “Holda is believed to cause many natural phenomena. Snow was caused by her shaking her feather bed, fog was the smoke from her fire. When it rained it was Holda’s washing day and lightning was heard when she worked at her flax. It was also said that she made the fields fertile and awoke the apple trees in the spring.” Holda has a magic well. Women could come to ask for help in conceiving children. Hard working children who visited the well would be rewarded with prizes from the well. Lazy children must beware! 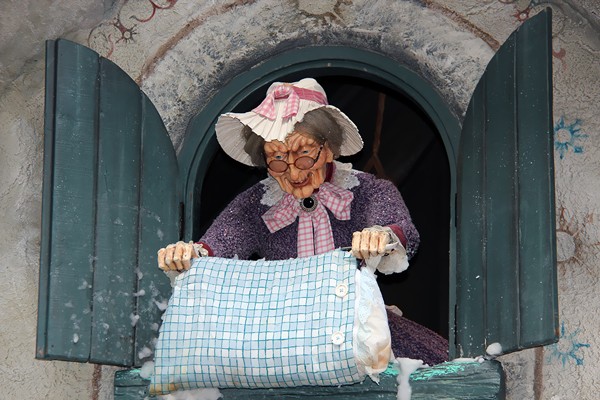 From Gracious Lady to Halloween Hag

So how did this lovely Goddess become the “Goddess of the Witch’s”, an ugly hag, riding her broom through the night sky? Many ancient customs, Gods and Goddesses have been misunderstood by historians – or adopted and morphed by the cultures that came later. But post-Christian documents seem to make a special effort to demonize “the Gracious One”. It is perhaps Holda’s association with the housewife that caused this special attention. It is my personal conclusion that Holda was demonized to discourage independence in housewives. Nowhere is this demonization clearer than in “Sleeping Beauty” where the spinning wheel and spindle are turned into symbols of evil. Many of her other attributes were turned around as well. Her protection of the dead soul of infants was turned around to her creeping in and stealing children from their cradles. Her image as wise old woman, instilling moral values turned to the foolish old Mother Goose who spreads wives tales.

I could go on…but please just remember…Holda is not the “Leader of the Cult of Witch’s” as portrayed by the church of the 15th century. She is a noble and gracious Goddess worthy of your praise as worshipped by the ancient Teutons.

False Names or connections: Holda is not Hel, Perchta, Berchta, Frigga, Witch’s Goddess, nor The Hag that rides through the night on her broom. 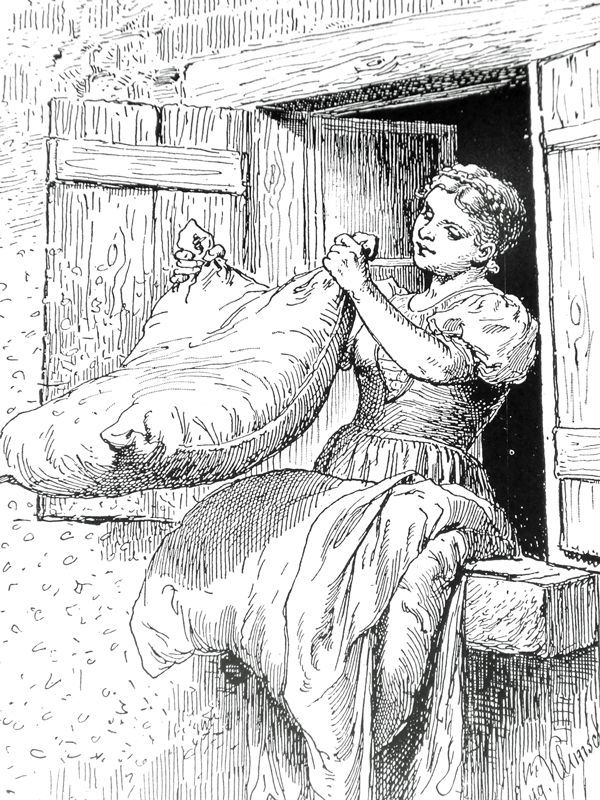 Holda is closely associated with Winter and Yule as it is Holda that brings the snow. Holda can tell the naughty children from the good and rides thru the sky on Yule Eve. You honor Holda anytime you give of yourself in your housework and cooking. Any work around the house can be done in Honor of Holda.

An excellent ritual to Holda would be a whole day affair. Take a day between Yule and New Years to clean the house and prepare for your New Year celebration. Burn red candles throughout the house with spicy scents. If there is anything left of your Yule log, use it to keep the house warm this day. Pause in the middle of the day to spend some time with your pets or the outdoor animals. End the day by eating spicy ginger cakes (gingerbread or covered in lots powdered sugar. Drink milk or Elderberry Tea. Remember Holda as the powdered sugar "snows" all over the place! Honor Holda by keeping New Years Day as a day of rest and celebration.

We have 841 guests and no members online