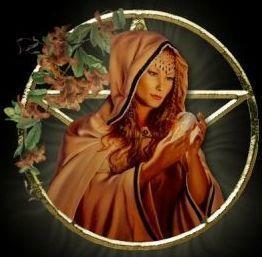 Rhiannon, the Celtic goddess of the moon was a Welch goddess. The goddess Rhiannon's name meant “Divine Queen” of the fairies. In her myths, Rhiannon was promised in marriage to an older man she found repugnant. Defying her family’s wishes that Rhiannon, like other Celtic goddesses, declined to marry one of her "own kind".

Instead, the goddess Rhiannon chose the mortal Prince Pwyll (pronounced Poo-ul or translated as Paul) as her future husband. Rhiannon appeared to Pwyll one afternoon while he stood with his companions on a great grass-covered mound in the deep forest surrounding his castle. These mounds, called Tors, were thought to be magical places, perhaps covering the entrance to the otherworld beneath the earth. It was thought that those who stood upon them would become enchanted, so most people avoided them.

So it is no surprise that the young prince was enchanted by the vision of the beautiful young goddess Rhiannon, who was dressed in glittering gold as she galloped by on her powerful white horse. Rhiannon rode by without sparing him even a glance. Pwyll was intrigued and enraptured, and his companions were understandably concerned.

Ignoring the protest of his friends, Pwyll sent his servant off riding his swiftest horse to catch her and asked her to return to meet the prince. But the servant soon returned and reported that she rode so swiftly that it seemed her horse’s feet scarcely touched the ground and that he could not even follow her to learn where she went.

The next day, ignoring his friends’ advice, Pwyll returned alone to the mound and, once more, the Celtic goddess appeared. Mounted on his horse, Pwyll pursued her but could not overtake her. Although his horse ran even faster than Rhiannon's, the distance between them always remained the same. Finally, after his horse began to tremble with exhaustion, he stopped and called out for her to wait. And Rhiannon did.

When Pwyll drew close she teased him gently, telling him that it would have been much kinder to his horse had he simply called out instead of chasing her. The goddess Rhiannon then let him know that she had come to find him, seeking his love.

Pwyll welcomed this for the very sight of this beautiful Celtic goddess had tugged at his heart, and he reached for her reins to guide her to his kingdom. But Rhiannon smiled tenderly and shook her head, telling him that they must wait a year and that then she would marry him. In the next moment, the goddess Rhiannon simply disappeared from him into the deep forest.

Rhiannon returned one year later, dressed as before, to greet Pwyll on the Tor. He was accompanied by a troop of his own men, as befitted a prince on his wedding day. Speaking no words, Rhiannon turned her horse and gestured for the men to follow her into the tangled woods. Although fearful, they complied. As they rode the trees suddenly parted before them, clearing a path, then closing in behind them when they passed.

Soon they entered a clearing and were joined by a flock of small songbirds that swooped playfully in the air around Rhiannon’s head. At the sound of their beautiful caroling all fear and worry suddenly left the men. Before long they arrived at her father’s palace, a stunning site that was surrounded by a lake. The castle, unlike any they had ever seen, was built not of wood or stone, but of silvery crystal. It spires soared into the heavens.

After the wedding a great feast was held to celebrate the marriage of the goddess. Rhiannon’s family and people were both welcoming and merry, but a quarrel broke out at the festivities. It was said that the man she’d once been promised to marry was making a scene, arguing that she should not be allowed to marry outside her own people.

Rhiannon slipped away from her husband’s side to deal with the situation as discreetly as she could . . . using a bit of magic, she turned the persistent suitor into a badger and caught him in a bag which she tied close and threw into the lake. Unfortunately, he managed to escape and later returned to cause great havoc in Rhiannon's life.

The next day Rhiannon left with Pwyll and his men to go to Wales as his princess. When they emerged from the forest and the trees closed behind them, Rhiannon took a moment to glance lovingly behind her. She knew that the entrance to the fairy kingdom was now closed and that she could never return to her childhood home. But she didn’t pause for long and seemed to have no regret.

Rhiannon was welcomed by her husband’s people and admired for her great beauty and her lovely singing. However, when two full years had passed without her becoming pregnant with an heir to the throne, the question of her bloodline, her “fitness” to be queen began to be raised.

Fortunately, in the next year she delivered a fine and healthy son. This baby, however, was to become the source of great sorrow for Rhiannon and Pwyll.

As was the custom then, six women servants had been assigned to stay with Rhiannon in her lying-in quarters to help her care for the infant. Although the servants were supposed to work in shifts tending to the baby throughout the night so that the goddess Rhiannon could sleep and regain her strength after having given birth, one evening they all fell asleep on the job.

When they woke to find the cradle empty, they were fearful they would be punished severely for their carelessness. They devised a plan to cast the blame on the goddess Rhiannon, who was, after all, an outsider, not really one of their own people. Killing a puppy, they smeared its blood on the sleeping Rhiannon and scattered its bones around her bed. Sounding the alarm, they accused the goddess of eating her own child.

Although Rhiannon swore her innocence, Pwyll, suffering from his own shock and grief and faced with the anger of his advisers and the people, did not come strongly to her defense, saying only that he would not divorce her and asking only that her life be spared. Rhiannon’s punishment was announced.

For the next seven years the goddess Rhiannon was to sit by the castle gate, bent under the heavy weight of a horse collar, greeting guests with the story of her crime and offering to carry them on her back into the castle.

Rhiannon bore her humiliating punishment without complaint. Through the bitter cold of winters and the dusty heat of four summers, she endured with quiet acceptance. Her courage was such that few accepted her offer to transport them into the castle. Respect for her began to spread throughout the country as travelers talked of the wretched punishment and the dignity with which the goddess Rhiannon bore her suffering.

In the fall of the fourth year three strangers appeared at the gate—a well-dressed nobleman, his wife, and a young boy. Rhiannon rose to greet them saying, “Lord, I am here to carry each of you into the Prince’s court, for I have killed my only child and this is my punishment.” The man, his wife, and the child dismounted.

While the man lifted the surprised Rhiannon onto his horse, the boy handed her a piece of an infant’s gown. Rhiannon saw that it was cloth that had been woven by her own hands. The boy then smiled at her, and she recognized that he had the eyes of his father, Pwyll.

Soon the story was told. Four years earlier, during a great storm, the nobleman had been called to the field to help a mare in labor, when he heard the infant’s cries and found him lying abandoned. He and his wife took the baby in, raising him as if he were their own.

When the rumors of the goddess Rhiannon’s fate had reached his ears, the farmer realized what had happened and set out at once to return the child to his parents. Most legends suggest that the badger actually was the enraged suitor that Rhiannon had rejected who had escaped and taken his revenge by kidnapping Rhiannon's infant son.

Pwyll and his people quickly recognized the boy for Pwyll and Rhiannon’s son. The goddess Rhiannon was restored to her honor and her place beside her husband. Although she had suffered immensely at their hands, Rhiannon, goddess of noble traits, saw that they were ashamed and was filled with forgiveness and understanding.

The story of the Celtic goddess Rhiannon reminds us of the healing power of humor, tears, and forgiveness. The goddess Rhiannon is a goddess of movement and change who remains steadfast, comforting us in times of crisis and of loss.

Rhiannon is often represented by symbols associated with her astonishing "other-worldliness". It is not surprising that many of our icons representing the enduring beauty and simple goodness are derived from the ancient goddess symbols of Rhiannon.

Moon, horses, horseshoe, songbirds, gates, the wind, and the Number 7.