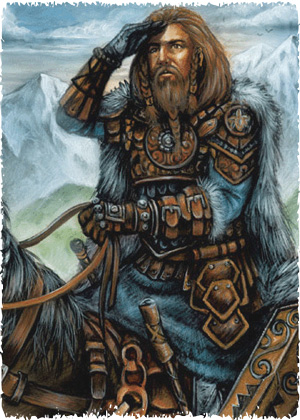 At the end of the war between the Æsir and the Vanir, all of the gods and goddesses sealed their truce by spitting into a great jar. Rather than letting this spittle be wasted, the gods decided to fashion a man from the spittle. His name was Kvasir, and he was so steeped in the knowledge of the nine worlds that he became renowned for his ability to answer people's questions. No one could ask him a question to which he did not know the answer.

Kvasir traveled widely teaching people his knowledge. He came to be the guest of two dwarves, Fjalar and Galar. Seeking a word in private with Kvasir, they brought him to a room and killed him. The dwarves drained out all his blood, catching it into two large jars and a cauldron. To the blood, they added honey, which formed a divine mead. Anyone who drank it became a wise man or a poet.

Fjalar and Galar kept the mead for themselves. When the Æsir sent a messenger asking about Kvasir, he was told that the wise man had choked on his own learning and died. Later, when the giant Gilling and his wife visited the dwarves, the brothers drowned Gilling and crushed his wife under a millstone.

When Gilling and his wife failed to return home, their son Suttung went in search of them. Suttung seized Fjalar and Galar and carried them far out into the ocean to a small rock rising just above the waves. Suttung pointed out that the rising tide would soon cover the rock, and that it was much too far back to the shore for the dwarves to swim.

Fjalar and Gilling begged for quarter. In exchange for their lives, they gave Suttung the three containers of mead. Suttung took the precious liquid directly to his home near the mountain Hnitbjörg. Here, he created a chamber deep within the mountain, and into it, he placed the two jars and the cauldron of mead for safekeeping. Suttung instructed his daughter Gunnlod to guard the mead by day and by night.

Word got back to the Æsir about what had happened to Kvasir and about the treasure of the mead. Ódin decided that he would journey to Jötenheim to recover the mead. He disguised himself as a man, and called himself Bölverkr (grief worker). 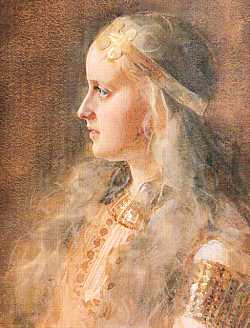 Bölverkr traveled to Jötenheim and eventually came to a valley where nine men were working in a field, scything grass. Bölverkr could see that the work was slow going because the scythes were not sharp. Striking up a conversation, Bölverkr learned that the men worked for Baugi, the brother of Suttung. Bölverkr then offered to sharpen their scythes. They gratefully accepted and were amazed to find how much quicker the work went after Bölverkr had finished his sharpening. They offered to buy Bölverk's whetstone from him.

Bölverkr responded by throwing the whetstone high into the air. The men all jostled for position to catch the whetstone and, turning as one, they all cut each other's throats with their scythes and fell dead. Bölverkr caught the whetstone as it fell, and continued on his journey.

That evening, Bölverkr made an appearance at the farm of Baugi, the giant, and asked for hospitality. Baugi was not in a pleasant mood, describing how his nine workmen had killed each other, and he despaired of finding replacements that late in the season. Bölverkr offered to do the work of all nine men for the rest of the season, providing that Baugi helped him obtain a drink of the mead of poetry from his brother, Suttung. Baugi said that he was not in a position to grant such a request. In the end, Bölverkr agreed to work for Baugi for the rest of the season, for which Baugi would ask his brother for a drink of mead for Bölverkr.

Bölverkr did the work of nine men and more for the rest of the summer. At the end of the summer, Bölverkr and Baugi approached Suttung and asked for a drink of mead. Suttung refused outright.

Bölverkr went to work on Baugi to enlist his help in tricking Suttung out of the mead. Eventually, Baugi agreed to help. Together, they went to the mountain Hnitbjörg. Bölverkr pulled out an auger and directed Baugi to use it to drill through the side of the mountain into the chamber where the mead was stored. Eventually, Baugi announced that he had broken through into the chamber. Bölverkr went up to the hole, and blew into it. Stone chips blew back into his face, proving that the hole didn't penetrate the stone. Realizing that Baugi had lied to him and was trying to cheat him, Bölverkr harshly set Baugi back to work.

A second time, Baugi announced he had breached the mountain. This time, Bölverk's breath of air blew the stone chips into the mountain, so he knew Baugi was right. Immediately, Bölverkr turned himself into the shape of a snake, and slithered into the hole. Baugi tried to skewer the snake with the auger, but he was too late.

Once inside the chamber, Bölverkr returned his shape to that of a man. He presented himself to Gunnlod, Suttung's daughter, who guarded the mead while sitting on a stool of solid gold. But at the sight of Bölverkr, Suttung's warnings to guard the mead left Gunnlod's head. Bölverk's beguiled her, and for three days, they lay together in the chamber in the heart of the mountain. 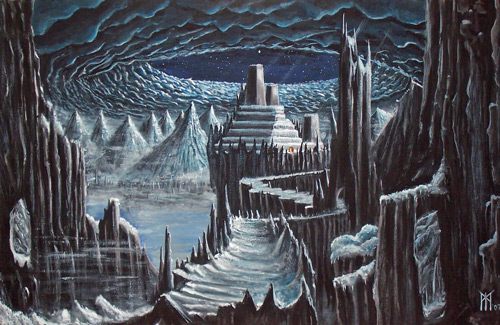 They flew across Jötenheim, across the mountains, towards Ásgard. When the Æsir saw them, they put out containers in the courtyard. As Ódin flew over the courtyard, he spat the mead out into the containers. Suttung was right behind him. It was such a close shave that, in the excitement, some of the mead came out backwards. This mead was not kept. Anyone can take it that wants it. It's called the rhymester's share (the portion for an inferior poet).

But the rest of Suttung's mead was safely stored away. Ódin gave it to the Æsir, and occasionally he gives it to those men who are skilled at composing poetry.

This story illustrates some of Ódin's less attractive attributes: his cunning, his deception, his self-seeking, his shape changing abilities, his use of disguises and false names, and his recourse to treachery. At least one source for this story (Hávamál) suggests that in seducing Gunnlod, Ódin broke a ring-oath, the most sacred oath imaginable to a Norseman, and one normally considered to be inviolable.

This story survives both in fragmentary form in Hávamál, and in a more complete form in Snorri Sturluson's Skáldskaparmál, from which the summary above was taken. Without the assistance of Snorri's version, the verses in Hávamál would make no sense at all. Clearly, there is more to the story (or at least another version of the story) than what Snorri relates. The story is old; picture stones illustrating the story existed more than four centuries before Snorri wrote the story down.