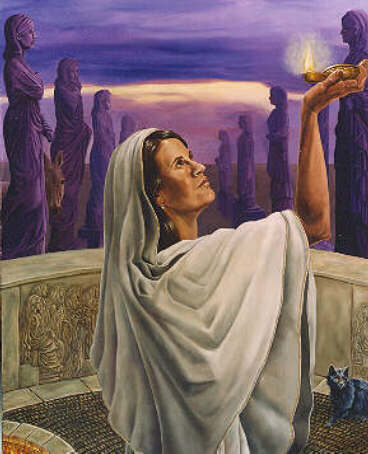 Hestia, Greek Goddess of the sacred fire, was once known as "Chief of the Goddesses" and "Hestia, First and Last". She was the most influential and widely revered of the Greek goddesses.

Though the goddess Hestia was once the most important of the Greek goddesses, she (like her counterpart, the Roman goddess Vesta) is virtually unknown today. Her name means “the essence”, the true nature of things.

Scholars often refer to the goddess Hestia as "the forgotten goddess". Because of the her association with hospitality, the word Hestia can mostly be heard today used in the names of inns and restaurants, making some people wonder if “Hestia” is the name of a franchise.

Unlike the other Greek goddesses, Hestia does not have a "story" . . . there were few adventures to record about her. She simply "is".

Few images of the goddess Hestia exist. A very "private person", her symbols, the sacred flame and the circle, are usually used to represent Hestia in works of art.

Hestia's brief stories, retold here, are too scanty to instruct us. It is her traits, not her actions, that most define her. These virtues define the goddess Hestia: mild, gentle, forgiving, peaceful, serene, dignified, calm, secure, stable, welcoming, and, above all else, well-centered.

Of all the Olympian gods and goddesses, Hestia was the first born. And also the last. This takes some explaining . . .

Her parents were the Titans, Cronus and Rhea. She was their first child. But Cronus, made fearful by a prophecy that one of his children would grow up to usurp his throne, quickly swallowed the infant Hestia (as he did the brothers and sisters that followed) in order to prevent the fulfillment of the prophecy.

Later, following the birth of Zeus, the grieving goddess Rhea tricked her husband into swallowing a rock wrapped in swaddling instead of the infant, causing him to vomit up all the babies he had swallowed. First in, Hestia was the last to be disgorged.

Hence, the goddess was often called "Hestia, First and Last".

The goddess Hestia grew in grace and beauty and soon caught the attention of the gods Apollo and Poseidon who both sought her hand in marriage.

But Hestia wasn't having any of it . . . saying that Aphrodite's ways (romance and marriage) were not her ways, she placed her hand on Zeus' brow and swore an oath that she would not marry.

More than anything else, she wanted to follow a path that was true to her nature and was of her own choosing.

She didn't require the trappings of power or adventure (like Athena and Artemis, the other virgin, i.e. unmarried, goddesses). She was perfectly content and fulfilled, being "Aunt Hestia", and enjoyed being of service to her family and community.

Zeus, grateful that Hestia’s announcement had averted the possibility of war between the rival suitors, not only supported Hestia’s wish to remain single but decreed that Hestia’s name should be mentioned first in any prayer and that she should receive the first portion of any sacrifice and be honored in the temples of each of the Olympian deities.

So delighted was he with Hestia's decision, that Zeus handed her the keys to the family home (Mount Olympus) and offered her the position of manager, and with it the responsibility of running this vast estate while the rest of the gods and goddesses wandered about in the larger world having all sorts of adventures.

True to her nature, Hestia stayed at home, never leaving Mount Olympus, always there to welcome the others and enjoy their “homecomings”.

The goddess Hestia never involved herself in the fights and machinations of the other gods and goddesses, somehow managing to stay above the fray.

Non-judgmental and forgiving, her “unconditional love” and calm acceptance inspired the love and trust of others in return. Dependable and caring, Hestia was always there for them and helped them to manage their lives which were certainly more exciting than her own.

One of Hestia’s most important responsibilities as the estate-manager was as “Keeper of the Reserves”, seeing to it that all their clothing and equipment was in good repair and the pantry always full so there would be ample food and wine on hand when any of the gods and goddesses returned from their adventures.

As keeper of the key to all the supplies, Hestia efficiently managed the large household, pleasing all with her practical dependability.

One of the few myths of Hestia tells how the lustful Priapus attempted to rape her as she slept.

As he approached her bed, a donkey (long since a symbol of lust) began to bray loudly, awakening the slumbering Hestia. Her screams awoke all the other gods and goddesses and sent the embarrassed Priapus falling all over himself as he tried to flee.

Hestia is also known as the originator of the concept of “sanctuary”. It was an offense to Hestia to refuse hospitality to a stranger. That those in need were to be sheltered and protected from ill-treatment was recognized by Hestia’s followers as a sacred obligation.

Special emphasis was placed on the requirement to not “take advantage” of a female guest, presumably as a result of Hestia’s experience with Priapus.

Hestia is often spoken of in conjunction with her friend and neighbor Hermes, the god of communication and travel. They were polar opposites in terms of personality—Hestia spoke little and stayed at home, while the outgoing Hermes had the “gift of gab” and traveled to the far ends of the world.

Though a marriage of such disparate characters clearly could not have succeeded, they shared strong bonds of friendship. They are remembered together in the Homeric Hymns (edited by H.G. Evelyn-White):

”…be favorable and help us you [Hermes] and Hestia, worshipful and dear. Come and dwell in this glorious house of friendship together, for you two, well knowing the noble actions of men, aid their wisdom and strength.”

The circle symbolized Hestia (and her counterpart, the Roman Goddess Vesta) as the "complete" goddess, the goddess who was whole, "one complete within herself". Hestia was seen as, not only psychologically "centered", but also as representing the center, the center of the home and family, the city, and even the world itself.

The source of Hestia’s sacred fire was believed to be the molten lava that burns at the center of the earth, connected by an “umbilical cord” called the Oomphalos to the city of Delphi, a place of great wisdom and spiritual energy.

The town hall, a meeting place for citizens to discuss the community's affairs (a forerunner of western democracy), was built around a hearth that honored Hestia.

The living flame of Hestia was tended constantly and never allowed to die out, for it represented the energy of all life and to let the flame extinguish was to invite a cold and barren existence. When new “subdivisions” were developed, fire was carried from the town’s hearth to light the fire of the new community, assuring its prosperity.

The Olympic Torch is just one example of the living flame that has survived to modern times, though it is seldom recalled that it originally honored the Greek goddess Hestia.

The ritual of a bride and groom lighting a candle together from the flames of two candelabra to symbolize the creation of the “new” family from their two “old” families derived from the ancient practice of bringing Hestia’s flame from the bride’s mother’s home in order to assure Hestia’s blessing on the union.

Every home had a hearth that was dedicated to the goddess, and each day began and ended with a ritual requesting that she protect and nurture the family within.

As the Goddess of Architecture, Hestia intended that homes should be built from the center out, with the center being a hearth that contained her sacred flame.

As part of the naming ritual, all infants were carried in a circle around the altar of Hestia to secure her blessings. There was an altar to Hestia in the center of every home . . . it was the fireplace, the hearth, where the family gathered.

Hestia's vision of a house was that it should truly be a home, a place where one's body, spirit, and relationships would be nurtured and replenished. . . a place to "come home to" after exposure to the cold and chaos of the external world.

Hestia is associated with the warmth and comfort of the welcoming fireplace. Just as the flames glowing from the hearth soothe us with their warmth and glowing light, the goddess Hestia gives us security, peace, and comfort and helps us accept the truth of our lives with inner grace.

Hestia (also known as the Roman goddess Vesta) is often represented by goddess symbols associated with her personality traits, the sacred flame, and her contribution to civilization, personal households, and to architecture.