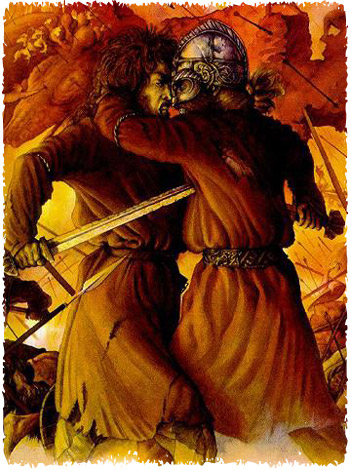 Loki Laufeyiarson, in Norse Mythology is the "god" of mischief, a son of Farbauti and Laufey, and is described as the "contriver of all fraud." Loki is actually not a god at all, but a Jotun (the Titans and Gigantes of Norse mythology), although he mixed freely with the gods for a long time, even becoming Odins foster-brother.

The trickster god is a complex character, a master of guile and deception. He is also conceived of as a fire spiritual being|spirit, with all the potential for good and ill associated with fire. Loki is also an adept shape-shifter, with the ability to change both form (examples include transmogrification to a salmon, horse, bird, flea, etc.) and sex.

Having liaisons with giantesses was nothing unusual for gods in Norse mythology—both Odin and Freyr are good examples; and since Loki was actually a giant himself, there is nothing unusual about this activity. Together with Angerboda, he had three children:

* Hel, the goddess of the underworld/realm of the dead

Loki was flying as a hawk one day and was captured by Geirrod, a frost giant. Geirrod, who hated Thor, demanded that Loki bring his enemy (without his magic belt and Mjolnir hammer) to Geirrods castle. Loki agreed to lead Thor to the trap.

On the way to Geirrods, they stopped at the home of Grid, a giantess. She waited until Loki left the room then told Thor what was happening and gave him her iron gloves and magical belt and staff. Thor killed Geirrod, and all other frost giants he could find.

Loki was not so much a figure of unmitigated badness as a kind of celestial con man/confidence trickster, who always managed to persuade the gods to give him another chance. Some anthropologists have compared him to Coyote, a trickster figure of Native American mythology.

Loki occasionally works with the other gods. For example, he tricked Hrimthur, who built the walls around Asgard, out of being paid for his work by distracting his horse while disguised as a mare—thereby he became the mother of Odins eight-legged horse Sleipnir. He also retrieved Gungnir - Odins spear, Skidbladnir - Freyrs ship and Sifs wig from Dvalin, the Norse dwarves/dwarf, as well as rescuing Idun. Finally,in Trymskvida, the funniest of Thors adventures, Loki manages, with Thor at his side, to get Mjollnir back when the giant Thrym secretly steals it, in order to ask for fair Freya as a bride, in exchange.

Loki overplayed his hand in this respect: disguised as a giantess, he arranged the murder of Baldur (he used mistletoe, the only plant which had not sworn to never harm Baldur, and made a dart of it, which he tricked Baldurs blind brother Hod into throwing at Baldur, thereby killing him), although earlier versions of the myth, attributed to Saxo Grammaticus do not implicate Loki. Significantly, also, the poem in the Elder Edda most associated with Loki, the Lokasenna, does not directly implicate Loki in Baldurs death.

The gods, bereft at the loss of Baldur, travelled to the underworld to bargain for Balders life; there, Hel told them that the only way to ensure the gods return was to have everything in the world weep for him. The gods went through the land, and convinced not only men, women and animals to weep for Balder, but also rocks and trees. Finally, they arrived at a cave in which a giantess dwelled. The gods were unable to convince her to cry for Baldur, and so he remained in the underworld. 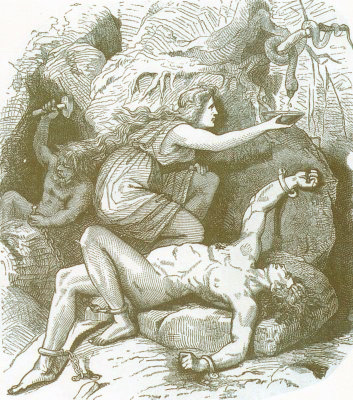 When the gods discovered that the giantess had been Loki in disguise, they hunted him down and bound him to three rocks with the entrails of either his son Fenrisulfr or Vali. Then they tied a serpent above him, the venom of which dripped onto his face. His wife Sigyn (a goddess, not the giantess who was the mother of Lokis monster brood) gathered the venom in a bowl, but from time to time she had to turn away to empty it, at which point the poison would drip onto Loki, who writhed in pain, thus causing earthquakes. He would free himself, however, in time to attack the gods at Ragnarok along with the other giants and his monster children.

Not all lore depicts Loki as a malevolent being. An 18th century ballad (that may have drawn from a much earlier source) from the Faroe Islands, entitled Loka Thaattur, depicts Loki as a friend to man: when a thurs (troll or giant) comes to take a farmers son away, the farmer and his wife pray to Odin to protect him. Odin hides the son in a field of wheat, but the thurs finds him. Odin rescues the son and takes him back to the farmer and his wife, saying that he is done hiding the son. The couple then prays to Honir, who hides the son in the neck-feathers of a swan, but again the Thurs finds him. On the third day, they pray to Loki, who hides the son amidst the eggs of a flounder. The thurs finds the flounder, but Loki instructs the boy to run into a boathouse. The giant gets his head caught in a peephole (the translation is not complete, but it appears to be a peephole) and Loki kills him by chopping off his leg and inserting a stick and a stone in the leg stump to prevent the thurs from regenerating. He takes the boy home, and the farmer and his wife embrace both of them.

"Loki, Norse God of tricksters, jesters and fools." A figure somewhat reminiscent of the Chinese mythology/Chinese Monkey King at times, whose persona in myth underwent changes over the centuries, Loki, for all his ambiguity, was a positive figure before Christianity took over his tale.