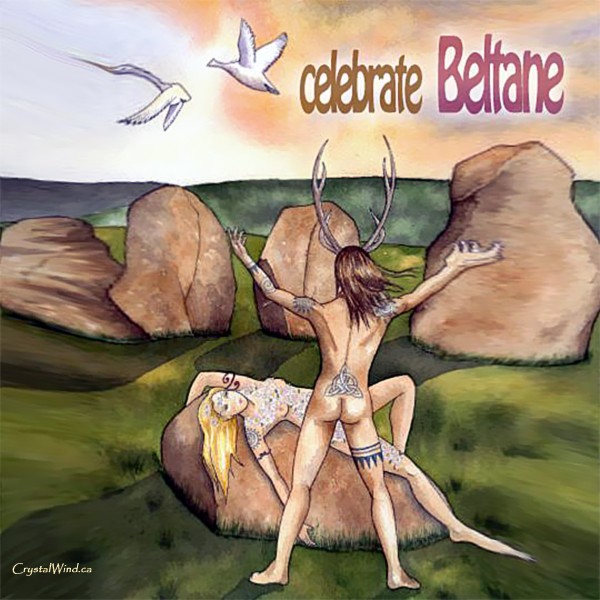 Around the medicine wheel of life we go, from season to season (solstice to equinox), the cardinal points and their mid-points speak the ancient cycles of time. It is so important to acknowledge, honour and celebrate nature’s auspicious times. If we are to restore spiritual order and harmony to our Earth, if we are to return to a balanced ecosystem, then we must keep the ancient earth holidays in some way. Why do you think the indigenous cultures of our world place so much emphasis on their sacred holidays and celebrations? These are the times of heartfelt reverence and traditional worship!

Remember Samhain? October 31st, when the veils are very thin and one can easily reach into the spiritual world of the ancestors through remembrance, offerings and ritual.

Samhain is about honoring Death, mentally and spiritually preparing oneself for the oncoming harsh Winter months when the Earth is under her death spell. Beltane, May 1st, on the other hand, is when the veils are extremely thin again and we are honouring Life.

“When the veils are so thin it is an extremely magical time, it is said that the Queen of the Faeries rides out on her white horse. Roving about on Beltane Eve, She will try to entice people away to the fairyland” (C. Aubin).

We may use this time then to reach into the magical and mystical world of the unseen, offering spring flowers, fire and our own bodies as payment for an abundant, hot and pleasurable Summer.

“The beginning of the summer heralds an important time, for the winter is a difficult journey and weariness and disheartenment set in, personally, one is tired down to the soul. In times past, the food stocks were low; variety was a distant memory. The drab non-color of winter’s end perfectly represents the dullness and fatigue that permeates on so many levels to this day. We need Beltane, as the earth needs the sun, for our very Spirit cries out for the renewal of Summers’ jubilation” (Christina Aubin).

Beltane is often called “the time of no time”, just like our current shift of ages. “This shift was and has been referred to as the ‘Time of no Time’. We are currently in the transition period of the fourth dimension which creates the illusion of being stuck in a time warp as Earth goes through a rapid shift in time and space” (Red Lotus).

If our current time on the Gregorian Calendar has been termed “the time of no time” then, I speculate, that we must honour this holiday even more so than ever before. This Beltane, I believe, is an important one before we are thrown into hyperspeed change-shift-destabilizing- to awakening on Planet Earth.

Years ago, I was speaking with a good girlfriend of mine on my porch, our husbands were in the house. We were enthusiastically talking about all the old pagan laws surrounding Beltane, especially the law regarding removing our wedding rings for a night. I jokingly said, “let us make sure to keep this alive for our daughters”. She replied, “Why for our daughters? What about us?” In that moment, we were two women who supported each other in our sexual freedom, despite our husbands irritated opinions on the matter. Ten years later, she is divorced and well, my marriage has been shaken to its core by Beltane. Little did I know at the time, that part of my large energetic work and service to humanity and the earth, part of my soul agreement and personal purpose, was to revive Beltane in all its glory.

What then is this holiday that can cause such excitement and turmoil? Beltane means fire of Bel; Belinos being one name for the Sun God who is celebrated on May 1st. Beltane, or Mayday as it is called, is celebrated with festivities typically beginning the evening before, on the last night of April. Large community bonfires are created, fire being a crucial and important element of this holiday. Maypoles, large poles, are erected. The Maypole is one of the traditional symbols of Beltane, and let’s not kid ourselves about its purpose: it’s a giant phallus representing fecundity. Young people would spend the entire night in the woods “A-Maying,” and then dance around the phallic Maypole the next morning. This was when couples (and probably more than a few surprised triads) came staggering in from the fields, clothes in disarray and straw in their hair after a night of bonfire-inspired lustiness. Older married couples were allowed to remove their wedding rings (and the restrictions they imply) for this one night. Young couples could undertake the greenwood marriage (an unofficial marriage which would last one year and a day). The pious Puritans were outraged by the debauchery of Beltane celebrations. In fact, they made Maypoles and greenwood marriages illegal in the mid 1600′s. (Everyone seems to have forgotten the deadwood divorces which can be used once a relationship hits its “deadwood” phase).

I am a Keeper and Protector of the Beltane Sabbat Celebration. In fact, I initiated a long forgotten tradition called the deadwood divorce: older married couples experiencing strife and stagnation could remove their rings for a year and a day: an agreed upon seperation in order to explore other life paths:

“Love fills everything.
It cannot be desired because it is and end in itself.
It cannot betray because it has nothing to do with possession.
It cannot be held prisoner because it is a river and will overflow its banks.
Anyone who tries to imprison love will cut off the spring that feeds it, and the trapped water will grow stagnant and rank.” (Paulo Coelho)

At the end of the greenwood or deadwood time, the couples in question would have to decide how to proceed further with either their marriage or their divorce. 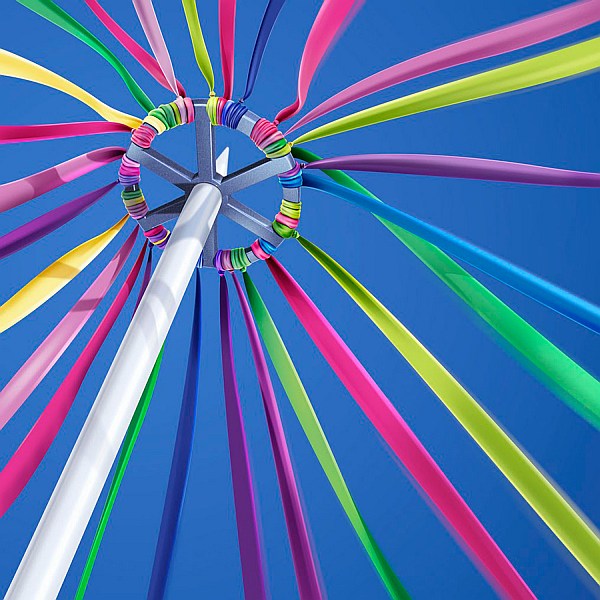 One year, not so long ago, I decided to have a grand Beltane party in my garden that I called the Maypole Dance. I found a long pole, traditionally used on the island for hauling up the lobster traps from the sea floor, that was over 20 feet in length. I decorated that pole with 20 descending purple ribbons 30 feet in length and I had my husband plant the Beltane pole into the ground. Something about this act felt not only sacred, but ancient. A few of the older villagers (ages 50-90 years old) approached me saying, “we loved the Maypole dance when we were children, how nice to see it brought back to life on the island”. I couldn’t believe it, the Mestizo/Mayan community had a remembrance of the Maypole Dance? I actually thought I was bringing to life a Pagan/Celtic celebration in Mayaland. Silly me, the Maya have a long history with the Maypole.

“A myth tells of a time when there was a great drought, and food and water grew scarce throughout the land. Five young men decided that they must send a message to their God of fertility so that the rains would return and nurture the soil, and their crops would again flourish. So they went into the forest and searched for the tallest, straightest tree they could find.

When they came upon the perfect tree, they stayed with it overnight, fasting and praying for the tree’s spirit to help them in their quest. The next day they blessed the tree, then felled it and carried it back to their village, never allowing it to touch the ground. Only when they decided upon the perfect location for their ritual, did they set the tree down. The men stripped the tree of its leaves and branches, dug a hole to stand it upright, then blessed the site with ritual offerings. The men adorned their bodies with feathers so that they would appear like birds to the God of Fertility, in hope of attracting the god’s attention to their important request. With vines wrapped around their waists, they secured themselves to the pole and made their plea through their flight and the haunting sound of the flute and drum” (Vanilla Company).

The Mayan of the Yucatan area of Mexico to this day hold elaborate Maypole dances in honour of the Sun God and fertility. ” Combining ritual, dance, music, poetry, and art, “THE TREE OF LIFE” (maypole) is a meditation on the mystery at the heart of human life. It calls us to keep the world in balance with our very lives” (Earthdancer). Each year in my life, the timekeeping of this sacred day simply grows and expands as I instill remembrance & hold permanence in my community and into our new crystal Earth grids.

The Tree Of Life grows
In the Land of Mystery:
There we were created;
There we were born.
There (S)He by whom all things live
Spins the thread of our lives.