Category: Wheel of the Year Written by CrystalWind.ca Views: 34621 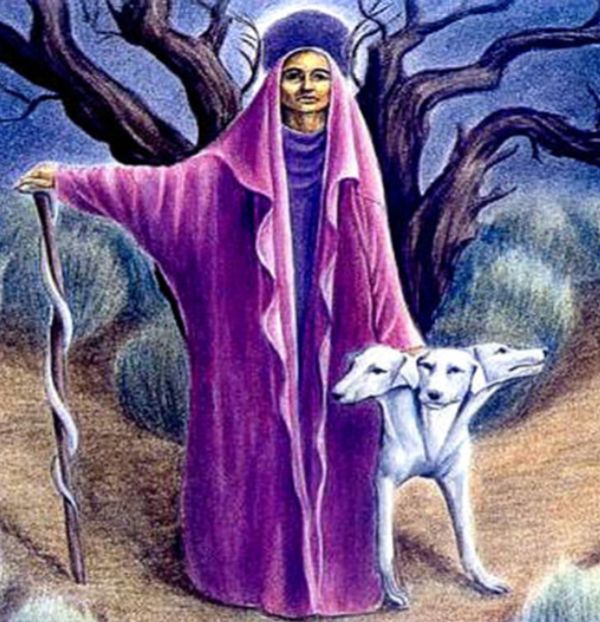 November 16 is the Night of Hecate which begins at sunset. This is the night of the Three-formed Goddess. Hecate is part of the most ancient form of the triple Moon goddess as Crone or Dark Moon. This is also the night of Hecate’s supper at the Crossroads. People who worshiped Hecate honoured Her by performing Sympathetic Magick and holding a supper at what they believed to be the Crossroads.

Hecate, Greek Goddess of the Crossroads

Hecate, Greek goddess of the three paths, guardian of the household, protector of everything newly born, and the goddess of witchcraft -- once a widely revered and influential goddess, the reputation of Hecate has been tarnished over the centuries. In current times, she is usually depicted as a "hag" or old witch stirring the cauldron.

But nothing could be further from the image of Hecate's original glory.

A beautiful and powerful goddess in her own right, the Greek goddess Hecate was the only one of the ancient Titans who Zeus allowed to retain their authority once the Olympians seized control. Zeus shared with Hecate, and only her, the awesome power of giving humanity anything she wished (or withholding it if she pleased).

Usually classified as a "moon goddess", her kingdoms were actually three-fold . . . the earth, sea, and sky. Having the power to create or withhold storms undoubtedly played a role in making her the goddess who was the protector of shepherds and sailors.

A lover of solitude, the Greek goddess Hecate was, like her cousin Artemis, a "virgin" goddess, unwilling to sacrifice her independent nature for the sake of marriage. Walking the roads at night or visiting cemeteries during the dark phase of the moon, the goddess Hecate was described as shining or luminous.

In other legends she is invisible, perhaps only glimpsed as a light, a "will-o-the-wisp".  Perhaps it was this luminous quality that marked Hecate as a "moon goddess", for she seemed quite at home on the earth.

Some scholars believe it is also was because her mother was Asteria (the Titan goddess of the Shining Light or "Star") or perhaps it was because she sensibly always carried a torch on her journeys.

Like Artemis, Hecate was usually depicted with her sacred dogs, although Hecate and even her animals were sometimes said to have three heads and that they could see in all directions. Although usually depicted as a beautiful woman having three human heads, some images are fearsome indeed (one with a snake's head, one with a horse's, and the third a boar's head).

This farsightedness, the ability to see in several directions at once (even the past, present, and future) featured largely in her most famous myth, the abduction of Persephone. For it was the goddess Hecate who "saw" and told the frantic Demeter what had become of her daughter.

The goddess Hecate continued to play an important role in the life of Persephone, becoming her confidante when she was in the Underworld. Hades, thankful for their friendship, was more than hospitable, honoring Hecate as a prominent and permanent guest in the spirit world. Surely this had the effect of enhancing her reputation as a spirit of black magic with the power to conjure up dreams, prophecies, and phantoms.

Hecate's ability to see into the Underworld, the "otherworld" of the sleeping and the dead, made her comfortable and tolerant in the company of those most would shun out of fear or misunderstanding.

In her role as 'Queen of the Night', sometimes traveling with a following of "ghosts" and other social outcasts, she was both honored and feared as the protectress of the oppressed and of those who lived "on the edge". In Rome many of the priests in her sacred groves were former slaves who had been released to work in her service.

The goddess Hecate was often accompanied on her travels by an owl, a symbol of wisdom. Not really known as a goddess of wisdom, per se, Hecate is nevertheless recognized for a special type of knowledge and is considered to be the goddess of trivia.

Hecate's farsightedness and attention to detail, combined with her extraordinary interest in that which most of us discount as irrelevant or arcane, gave her tremendous powers.

She knew what the rest of us did not. 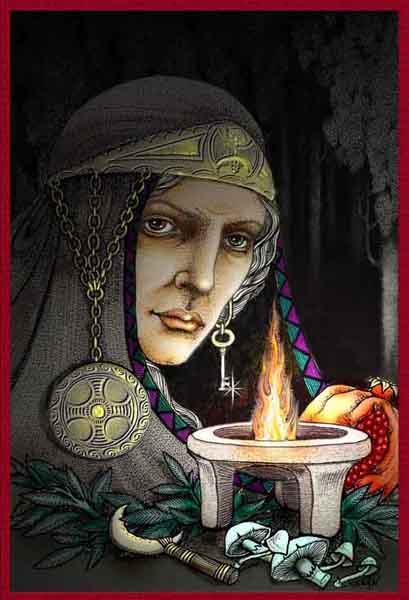 Not surprisingly, the people thought it best to give the goddess Hecate (and any friends that might be accompanying her) a lot of honor and a fairly wide berth. When darkness descended they wisely retired to the fireside for supper, but put the leftovers outside as an offering to Hecate and her hounds.

That the homeless and destitute were often the actual beneficiaries hardly mattered...after all, they were under Hecate's protection.

In a similar fashion, food was often left at the crossroads to honor Hecate, especially at junctions where three roads converged --what we often call a "Y-intersection".

Frequently a pole was erected at the intersection and three masks would be hung from it to pay homage to Hecate and to request her guidance in helping to choose the right direction.

Three-faced masks also adorned the entrances of many homes, honoring the goddess Hecate who could, of course, wield her influence over "the spirits that traveled the earth" to keep them from entering the household.

It is hardly surprising that a woman who needed to make a trip alone at night would say a brief prayer to Hecate to seek her protection. The goddess Hecate, like her cousin Artemis, was known as a protector of women, especially during childbirth.

Not only was Hecate called upon to ease the pains and progress of a woman's labor, but especially to protect and restore the health and growth of a child.

Similarly, Hecate played a role that, in contemporary times, we would describe as "hospice nurse", helping the elderly make a smooth and painless passage into the next life and staying with them, if need be, in the otherworld to help prepare them for their eventual return to the earth in their next life.

Familiar with the process of death and dying as well as that of new birth and new life, the goddess Hecate was wise in all of earth's mysteries.

The Greek goddess Hecate reminds us of the importance of change, helping us to release the past, especially those things that are hindering our growth, and to accept change and transitions. She sometimes asks us to let go of what is familiar, safe, and secure and to travel to the scary places of the soul.

New beginnings, whether spiritual or mundane, aren't always easy. But Hecate is there to support and show you the way.

She loans her farsightedness for you to see what lies deeply forgotten or even hidden, and helps you make a choice and find your path. Oft times she shines her torch to guide you while you are in dreams or meditation.

Hecate teaches us to be just and to be tolerant of those who are different or less fortunate, yet she is hardly a "bleeding heart", for Hecate dispenses justice "blindly" and equally.

Whether the Greek goddess Hecate visits us in waking hours or only while we sleep, she can lead us to see things differently (ourselves included) and help us find greater understanding of our selves and others.

Although her name may mean "The Distant One", Hecate is always close at hand in times of need, helping us to release the old, familiar ways and find our way through new beginnings.

Hecate, "The Distant One" ( best known as Hecate, Greek goddess of the Crossroads) is often represented by symbols associated with her personality traits and her role as Queen of the Night. Since Hecate is the goddess of witchcraft, it should come as no surprise that many of her goddess symbols play a prominent role in the celebration of Halloween.

© 2010-2022 crystalwind.ca. All rights reserved. We track all IP addresses with sniffer technology. Using a Proxy/VPN will not hide your IP address.