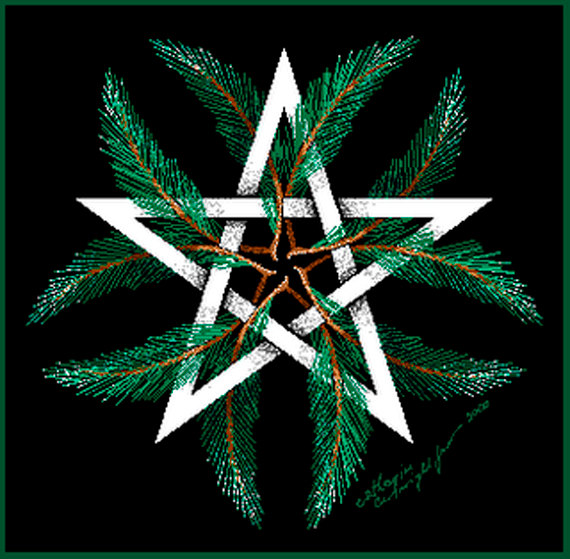 The Winter Solstice or Yule is one of the Lesser Wiccan Sabbats, and it is also the shortest day of the year, and hence - the longest night. This usually takes place on December 20th or 21st, although it does sometimes occur on the 22nd or 23rd (check your calendar as it changes from year to year). Other than the most common name of Yule, various other names for the Winter Solstice include Midwinter, Yuletide (the Teutonic version), Alban Arthan (Caledonii Tradition, or the Druids), Feill Fionnain (Pecti-Wita Tradition, which falls on December 22nd). Yuletide lasts from December 20th through December 31st. It begins on "Mother Night" and ends twelve days later, on "Yule Night", hence the "Twelve Days of Christmas" tradition. Alban Arthan, unlike all the others, is not considered a fire festival.

Some other names for this Sabbat that are used less commonly are: Sun Return, Pagan New Year, Saturnalia (Roman), Great Day of the Cauldron, and Festival of Sol.

Yule is a time of the Goddess of the Cold Darkness and the birth of the Divine Child, the reborn Sun God. It is a time of renewal and rebirth during Winter, and the turning of the Earth force tides. A time when the waxing Sun overcomes the waning Sun. In some traditions, this is symbolized by the struggle between the Oak King and the Holly King. 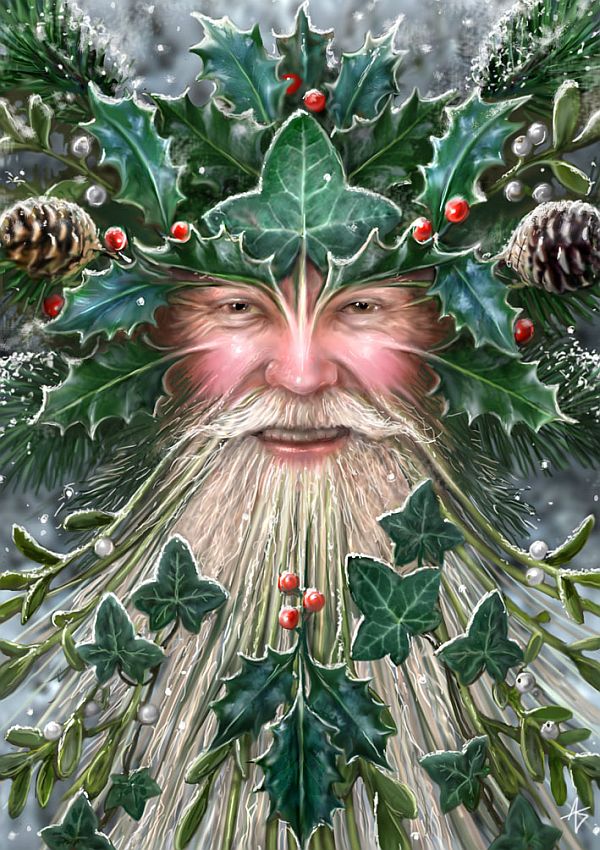 The Holly King, represents the Death aspect of the God at this time of year; and the Oak King, represents the opposite aspect of Rebirth (these roles are reversed at Midsummer). This can be likened to the Divine Child's birth. The myth of the Holly King/Oak King probably originated from the Druids to whom these two trees were highly sacred. The Oak King (God of the Waxing Year) kills the Holly King (God of the Waning Year) at Yule (the Winter Solstice). The Oak King then reigns supreme until Litha (the Summer Solstice) when the two battle again, this time with the Holly King victorious. Examples of the Holly King's image can be seen in our modern Santa Claus. He dons a sprig of holly in his hat, wears red clothing, and drives a team of eight (total number of Solar Sabbats) reindeer, an animal sacred to the Celtic Gods (deer). Mistletoe and holly came into modern Christmas celebrations through the memorializing of this battle. The holly with berries are hung in honor of the Holly King and mistletoe in honor of the Oak King. Although the Holly King and Oak King are mortal enemies at the two Solstices - Yule and Litha - it should be remembered that they are actually two sides of one whole, and neither would exist without the other. 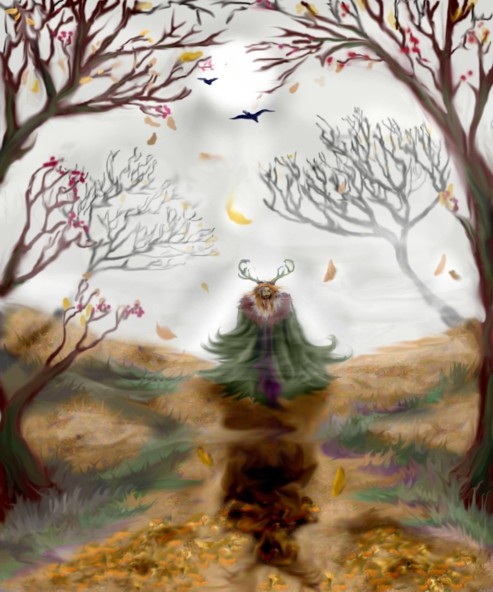 Today we do bid Hail to our beloved Holly King

With these ancient carols, we do again sing

He who is called Father Christmas is returning yet again

As the Solstice's longest night has finally begun

We await you, Santa Claus, Lord of Winter

To honor you on this day that you always were

This invocation, we pray you do hear

Come bless us, upon this season of the Yuletide

Great Holly King as you fly upon your sleigh ride

Whether your gifts to us be physical or spiritual

We know that they will always be most magical

Grateful, because we know your blessings' great worth

We offer a blessing of our own --- Peace on Earth!

Since this is a Solar Festival, it is celebrated by fire and the use of many candles or the Yule Log. The colors of the season - red and green - are of original Pagan descent. Symbols representing Yule include an eight-spoked wheel symbol, evergreens, wreaths, holly, mistletoe, Yule Trees (very similar to the familiar "Christmas Trees"), or a small potted tree, and Yule Logs. There are a couple of different versions of Yule Logs:

The act of decorating the Yule Tree, wreaths of holly, and the exchange of gifts are also Pagan derivatives. The Yule Tree can be a living, potted tree which can later be planted in the ground, a cut one, or even an artificial one. The choice is yours. Appropriate Wiccan decorations range from strings of dried rosebuds, cinnamon sticks, popcorn or cranberries for garlands to bags of fragrant spices hung from boughs. Quartz crystals can be wrapped with shiny wire and suspended from sturdy branches to resemble icicles. Apples, oranges, lemons, nuts of all kinds and cookies hanging from boughs and branches are strikingly beautiful; and can be real or artificial, depending on your taste. These natural decorations were customary in ancient times. The reindeer stag is also a reminder of the Horned God. You will find that many traditional Christmas decorations have some type of Pagan ancestry or significance that can be added to your Yule holiday.

Deities to honor at this time of year include all Newborn Gods and Sun Gods, and all Mother Goddesses and Triple Goddesses. Appropriate Yule Gods include Apollo (Greek), Ra, Osiris, Horus, (all three are Egyptian), Lugh (Irish-Celtic), Odin (Norse), Father Sun (Native American), and Jesus (Christian-Gnostic), to name a few. Goddesses might include the Morrigan, Brigit (both Celtic), Isis (Egyptian), Demeter, Gaea, Pandora, Selene, and Artemis (all five are Greek), Juno and Diana (both Roman), Astarte (Middle Eastern), Spinning Woman (Native American) and the Virgin Mary (Christian-Gnostic).

Ritually, you may want to light fires within the Circle (in the cauldron, for instance), light candles and carry them around the Circle or bring the Yule log into the Circle and include it in your ceremony. Bayberry candles can be burned to ensure prosperity, growth and happiness throughout the following year. These can be inscribed with runes for health and money, or whatever is desired before lighting. They shall be lit at sunset and allowed to burn until they go out by themselves. An old Germanic poem says "A bayberry candle burned to the socket brings food to the larder and gold to the pocket."

Spellwork for balance, beauty, peace, and harmony are great to perform at this time of the Pagan year. Love spells and spells to increase happiness are also appropriate. Key actions to remember for Yule are introspection and meditation.

The most common colors used at this Sabbat are red and green, but gold and white are also quite appropriate. Stones to be used at this celebration include bloodstones, rubies, and garnets. Animals associated with the Yule Sabbat are stags, squirrels, wrens and robins. Mythical creatures associated with Yule are the Phoenix, and trolls. Herbs and plants that can be used include holly, mistletoe, evergreens, poinsettias, bay, pine, ginger, valerian, and myrrh.

The foods of Yule include nuts, fruits such as apples and pears, cookies and cakes of caraway soaked in cider, and (for non-vegetarians) pork are all traditional fare. Fine drinks for the Yule celebration or meals include Wassail (a hot drink made from wine, beer or cider, spices, sugar, and usually baked apples---served in a large bowl), lamb's wool (ale mixed with sugar, nutmeg and the pulp of roasted apples), hibiscus or ginger tea, and apple cider.

And now here is a nice little excerpt for Yule by Silver RavenWolf... 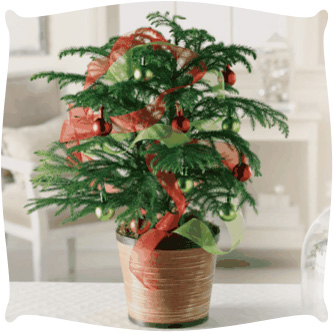 Often, the items we truly need cannot ride home with us in a bag from the mall during the holiday season countdown. The day before Thanksgiving, take a trip to the tree nursery and find a small, potted evergreen. On your way home, purchase a few yards of red, green, and white ribbon. During the Thanksgiving supper, introduce the tree to the family and the tribe to the tree. Each member of your clan should tie a ribbon on the tree to represent an intangible blessing they would like for the upcoming Yule season. Wishes could be for peace, enough rest, health, etc. Bless the tree and set it where it will have enough light.

When family and friends visit, explain the purpose of the wish tree to them and give them a ribbon to tie on the tree, too. The tree is for everyone. If you plan to use the tree in ritual, have everyone participating make a small ornament, empowered for strengths like self-esteem, goal planning, security, etc. and hang it on the tree while connecting with the divinity of their choice.

On the first day of February, remove all the ornaments and ribbons. Burn the ribbons and cast the ashes to the winds. Pack the ornaments away. Next year, when you open the box, you can de-magick the ornaments and return them to their owners, or hang them on your big tree in memory of last year's prosperity. Continue to take good care of the tree over the remaining winter months. Don't forget to give it water and plenty of love. In the spring, you can plant the tree outside on your property or on the property of a friend.

(The above "The Yule Wish Tree" by Silver RavenWolf is quoted directly from Llewellyn's 1995 Magical Almanac, page 264, Llewellyn Worldwide Publications, 1994.)

(The above recipe for "Yule Incense" is directly quoted from Scott Cunningham's book: "The Complete Book of Incense, Oils & Brews", page 100, Llewellyn Publications, 1992.)

And finally, here are several nice devotional incantations/poems with proper credit given to each author...

Enjoy and May Ye Blessed Be! 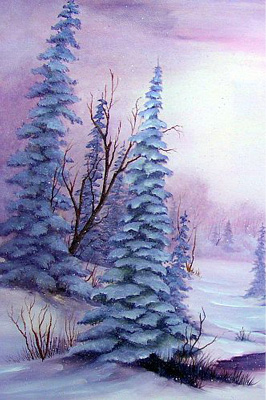 sinking its fangs into the gentle flesh of the earth,

the world grinds to a halt

the God is dead.

given up his life in the last harvest.

mourning his passing with every moon

awaiting the return of the Sun Lord

with the gentle coming of spring.

The Dark of Midwinter
Grows and spreads
Holding earth in its lifeless embrace
Beyond the barrenness
Is a time of rejoicing
A time of rest and rejuvenation
Of the stillness of rivers running below ice.
The days shorten and grow colder
Night deepens
Yet still stars dance against the furry expanse of sky
Diamond pinpoints against velvet black.
There comes the midpoint
The shortest day
The longest dark
And we rejoice
For winter's death
Soon gives way to spring
As the Balance swings again.
The Lady ceases to mourn Her beloved
Feeling the stir of new life within
Instead She rejoices
In the birth of the one
Who wil restore Her
And us.

We have 858 guests and no members online