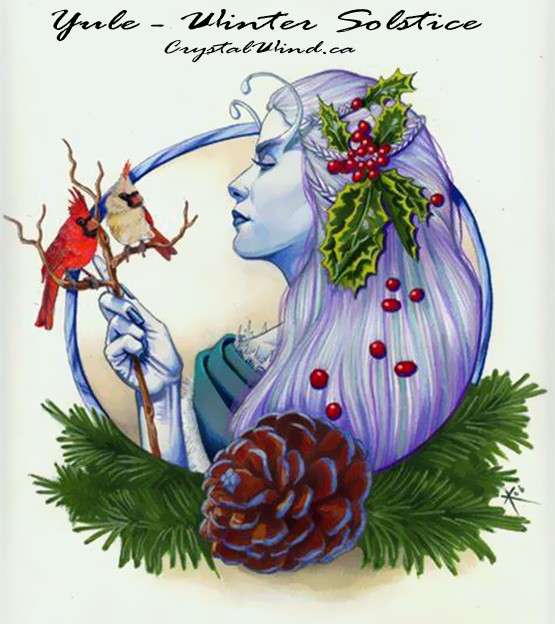 Yule, or the Winter Solstice is one of the lesser Sabbats of the Witches calendar, and this year in the northern hemisphere is celebrated on the 21st of December. Yule is a celebration marking the death and rebirth of the Sun in Midwinter, and is the second of two annual solstices dividing the year (the first being Litha, which celebrates the Sun at its peak in Midsummer).

The word “solstice” is derived from two Latin words:  “sol” (the sun) and “sistere” (to stand still), the Winter Solstice therefore means, “Sun stands still inWinter”.  Yule marks the longest night and shortest day of the year, when the Sun ceases its decline in the sky, and for three days thereafter seems to stand still and lie dormant on the horizon, after this it once again begins its ascent into the northern sky and the days grow longer.

Yule celebrates the rebirth of the Sun God, born of the Goddess after her return from the Underworld.  Fires and candles are lit to welcome the return of the Sun Gods light while the Goddess rests after delivery and the hardships of her winter in labour.  Yule or the Winter Solstice is known by various other names, including:  Alban Arthan (Caledonii or Druid), Jul (Norse), Yuletide (Teutonic), Feill Fionnain (Pecti-Wita), Gwyl Canol Gaeof (Welsh), the Longest Night, Midwinter and of course Christmas from Christianity.

The Yule celebration was particularly important to our ancestors, occurring at a time when many (the poor, the old, the feeble) were not expected to live throughout the winter.  It was a time when their very survival depended on preparations they had made during the previous nine months.  Starvation was a constant threat for many throughout the winter, indeed January through April were known as “the famine months”).  For many, the Midwinter festival was their last great feast before the deprivations of deep winter set in.  Any cattle left not needed for future breeding would have been slaughtered to provide fresh meat, and any left-over produce from the last harvest fermented and made into wine and beer for drinking.

Traditionally for the festivities, streets, homes and churches would be decorated using natural resources, such like Mistletoe, Holly and Ivy.  Their use brought colour and life into the home and acted as a means of contact with the spirits of nature at a time when such has been threatened by the declining light of the Sun.  The Druids especially prized mistletoe that grew in the sacred Oak trees, and on the Eve of the Winter Solstice would harvest the plant with a Golden Sickle.  The white berries of the Mistletoe represented the male aspects of the Sun God, and were used to invoke fertility and the awakening powers of the Sun. 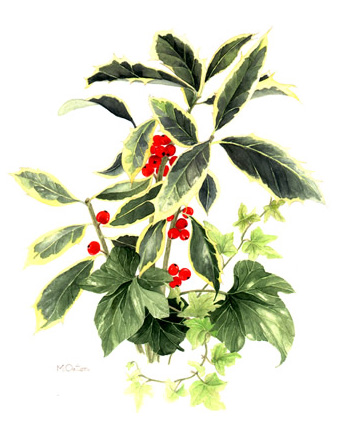 Equally sacred was the Holly, which again was prized by the Druids.  When all the other trees have lost their leaves, the Holly’s evergreen nature symbolized immortality by adding a splash of colour to an otherwise barren woodlands.  The red berries of the Holly were also thought representative of the sacred menstrual blood of the Goddess.  A wreath of Holly was hung on the doors of the home for protection, and a sprig kept throughout the year for continued good fortune.  Ivy is another evergreen plant and associated with one of the most popular of the ancient Egyptian gods, Osiris, a God of the Sun, Agriculture and Health.

Given the Druids veneration of trees, it may come as no surprise that the tree should play an important part in the Yule celebrations.  As a focal point in the household, a tree, normally a conifer because of its evergreen nature, would be brought inside the home and decorated.  As the tree was a known home of the Fairies and other Spirits, to appease them, they dressed the tree with strips of brightly coloured cloth, strings of shiny beads, fruit, gingerbread men and sweets of all kinds, which they hung from its branches.  Later however, with the arrival of Christianity, early Church leaders banned the practice in their efforts to stamp out pagan beliefs and associations.

The modern Christmas tree as we know it today, only dates back to Victorian times, when the practice of decorating a tree was re-introduce and made popular Queen Victoria and Prince Albert.  In 1846 they were pictured in the Illustrated London News standing with their children around a decorated Christmas tree.  As the Queen was very popular the practice soon became fashionable, not only in Britain and continental Europe, but also in America.

The Victoria and Albert Christmas Tree 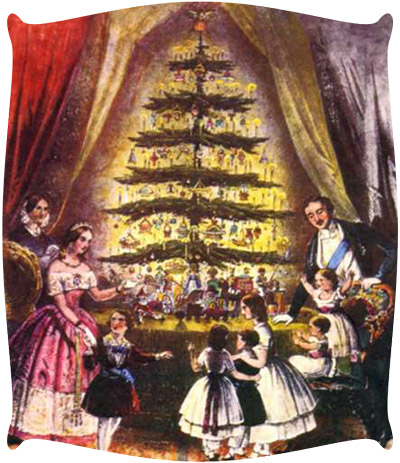 Another tradition of old was the lighting of a Yule Log, which was done with great ceremony and as a highlight of the family celebrations.  It was believed that fire symbolized the return of the Sun after the Winter Solstice.  Traditionally the log used would have been of sacred Oak or Ash, from a tree felled on the householder’s land, or given as a gift by their landlord.  Placed in the hearth it would have been decorated with seasonal greenery, doused with cider or ale and dusted with white flour for added snow effect.  Offerings of corn or breadcrumbs would be scattered over it, and coins to aid future prosperity placed upon it.  Later the charred coins would be given away as lucky charms. On the eve of the Solstice the log would be lit and set ablaze using a piece saved from the previous years Yule log.  The log would be allowed to burn throughout the night and then left to smoulder for the next 12 days, before being put out.  A piece would then be saved and kept to light the following years log.

The Yule Log was believed to have many magical properties, and when lit was thought to ward off evil spirits.  Later when put out, pieces of the log would be distributed around the house for added protection against thunderstorms and lightning.  Likewise the ash from the fire was never discarded, but used for healing purposes in both humans and animals.  Rubbed into hands and feet it helped to protect against chilblains, when mixed with animal fodder it aided cows to calve and when mixed with corn seeds it kept the poultry flock healthy for the coming year.

Yule is all about community, friendship and helping others.  This sense of community led to another old tradition called “Wassailing”, which was the precursor to today’s practice of Christmas Carolling.  The word “Wassail” comes from the old Anglo-Saxon term “Waes Hael”, which has been variously translated as a toast meaning:  “Be Well”, “Be Whole”, “Be Healthy” or “Be Happy”.  The proper response to this is:  “Drink Hael”, making it a shared and mutual well wishing.  As Caroller’s still do today, traditionally friends and neighbours would go from door to door on the eve of the solstice, singing and bearing their “Wassail Cups”, to be rewarded with seasonal drinks, fruit, bread or sweets from those who could afford to give it.  The same would be freely given back to any poor and needy they met along the way.

In mythology, the Winter Solstice symbolizes the end of the reign of the Holly-King.  As the sun reaches the end of its decline at the Winter Solstice (represented by the Holly-King) and once again begins its ascent back to summer (represented by the Oak King) the two engage in battle.  This time the Holly-King is defeated by the Oak-King who then rules over the first half of the new year until they meet again and do battle at the Summer Solstice.  This in essence is an enactment of the annual cycle of life, growth and death in nature.  The Oak King is the growing youth whose life and strength reaches its peak in Mid-summer, while the Holly King is the mature man whose life and strength declines in Mid-winter, from where he is again re-born of the Goddess.

This change from one King to the other is a common theme for ritual re-enactments at Mid-summer and Mid-winter festivals.  In theory, the Kings are brothers and both exist as different aspect of the same Sun God, but each has varying levels of influence throughout the year.  The youthful time of the Oak King is for growth, development, health, healing and new projects, while the time of the mature Holly King is for deliberating, reflecting, contemplation and learning.

Herbs and Plants of Yule:

Other associations of Yule:

Colours of Yule include:  Red and Green, but Gold and White are also appropriate.

Stones of Yule include:  Bloodstones, Rubies and Garnets.

Animals of Yule include:  Stags, Squirrels, Wrens and Robins.

Mythical creatures of Yule include:  the Phoenix and Trolls.

Drinks for the Yule celebration might include:  Wassail (a hot drink made from wine, beer or cider, spices, sugar and usually baked apples all served in a large punch bowl), Lamb’s wool (ale mixed with sugar, nutmeg and the pulp of roasted apples), hibiscus or ginger tea, and apple cider.

Makes enough for 15-20 people – but you will wish you had made more!