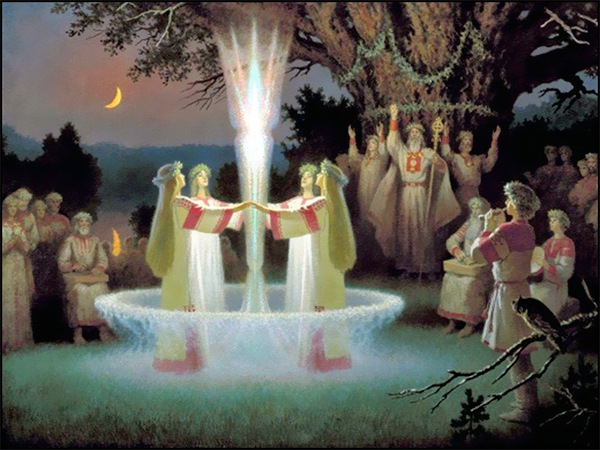 When I first came to Druidry, doing the rituals associated with the wheel of the year seemed like the most important thing. The tone and style of Druid rituals, and all the things that made them different from other people’s rituals, seemed to define what Druidry is. I was able to learn the seasonal approaches by participating in a Grove, and going on to study with OBOD affirmed, and firmed up this learning (amongst other things).

For some years I ran an open gathering and a closed circle – again with seasonal ritual being the main features. As an organiser, it started to seem to me that the most important things about ritual were the bringing together and bonding of communities, and getting people who were not otherwise much engaged with the seasons or the natural world, to engage meaningfully. For busy urban Pagans, those eight festivals a year were key opportunities to get out to somewhere green and stop for a while.

As an organiser, ritual became something I did for other people, and my own practice shifted towards something more private, less structured.

In recent years I haven’t had a group of people who wanted regular ritual from me, so I haven’t organised any. It’s not something I want to do on my own account any more, aside from being occasionally drawn to the sharing-with-people aspect.

At the moment my involvement with the wheel of the year is much more a day to day process, with no big celebrations. I engage primarily by walking, and by seeking out the changes that go with each season. Finding out which flowers bloom where and when, and seeking them out, has been a major feature over the last few years.

Four years ago or so, I had no idea how to be a solitary Druid because the community work defined my path for me. For a while it felt like showing up to write this blog was the only discernibly Druid thing I had going on. Recognition of, and deepening of my own relationship with the land has changed how I feel about a lot of things. Ritual for personal practice makes a lot less sense to me – generally the more involved a ritual is, the less sense it makes! Minimal practices to hold meditative group work I am fine with, and that’s all I have going on at the moment on that side. Showing up for collective Druidry has become an aside, not the main thrust of what I do.

Learning to trust that the unshowy, private, confers neither power nor importance stuff, is also Druidry, and is Druidry even though there’s no one outside my immediate family to validate what I’m doing, has taken a while. I still think of proper Druidry as the kind of thing clever people do in circles while wearing robes, but I feel increasingly out of place there. Not clever enough, robed enough or drawn to circles enough. I think there is room alongside that for something more personal, less useful to anyone else, less easily spoken of.

We have 1506 guests and no members online