Why Bother Telling Others?
A+ A A-

What is Ceremony and Why Do We Need It? 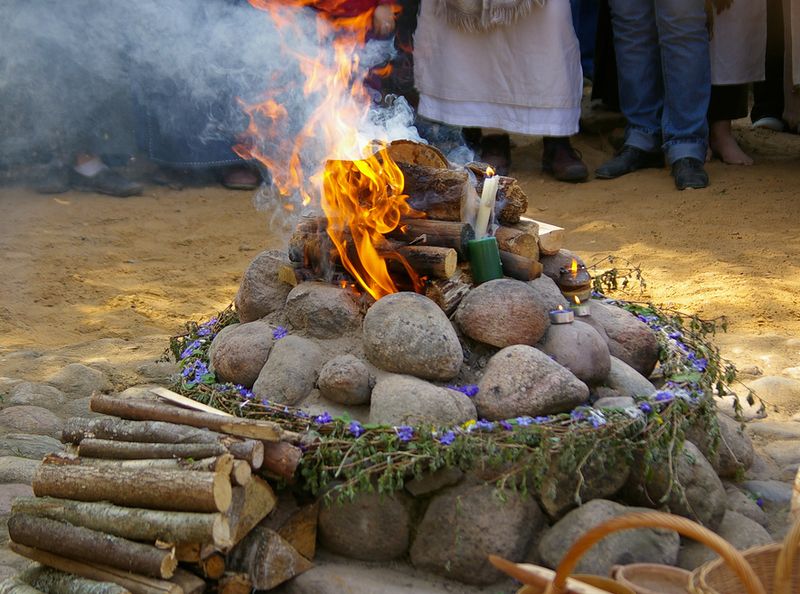 I am convinced that the need for ceremony is embedded deep within our DNA. I am always amazed when I am with a group of people in almost any part of the world, how eager they are to do something ceremonially even if it is just a champagne toast or an announcement of an engagement that calls for three cheers and the like. When a group of people hear about a sudden death the first thing they think of is something ceremonial like lighting candles or making a makeshift shrine or getting in a group to pray, sing, or recite poems.

In the case of a celebrity like John Lennon or Princess Diana these spontaneous ceremonies grew to epic proportions. In our own shamanic groups the minute we announce some kind of ceremony, faces light up, eyes glow, and people demonstrate clear signs of excitement, sometimes a little anxiety, or anticipation. These clear signs of interest are hard to ignore. You could discount all this with simply an observation that some people will use anything as an excuse to party but that really cannot explain away the power of ceremony around the world. If you travel you can clearly see this. If anything, Americans are some of the least ceremonial people on the planet but they still exhibit a great penchant for it even if it is often secular as in sports and award ceremonies and the like. How many award ceremonies can you have? Apparently a lot of them.

Obviously religions are famous for their multiple ceremonies honoring feast days, Saints, and great events of the past. However when you look closely at these ceremonies they all bear some likeness to the most ancient shamanic ceremonies that have been performed since ancient times. So let us take a closer look at these richly symbolic ceremonies to see how they are performed in such a compelling way as to last for tens of thousands of years. What do participants experience as part of a good ceremony?

In order to accomplish some of these experiences a shamanic ceremony includes all these elements: Note that they may not always follow this order.

There are preparations such as fasting, avoiding drinking alcohol or sex, perhaps following a no salt diet for a few days prior to the ceremony. These preparations vary tremendously depending on culture, time of year, and purpose of ceremony.

The ceremonialist opens the ceremony by stating the purpose of the ceremony. This may be similar to the opening of a wedding where the officient states: We are gathered here to witness the joining together of …x ….and …y. No shamanic ceremony is performed without a focus or a purpose. It may be for the purpose of blessing the children or the animals, having a good fertile crop or harvest, healing an individual of wounds or an illness, celebrating a joining together, a saying farewell to a friend because of transition through death, initiations and rights of passage for young warriors and maidens, and for many other purposes.

The participants are invited to help in preparing the ceremonial space. This may involved an invocation, visualizations, prayers, laying out of the altar, bringing fresh flowers, and so on. Sometimes this is the first thing done.

There is a cleansing. All participants undergo some kind of clearing and cleaning through tobacco smoke, sage, incense, sacred feathers and the like. Sometimes the ceremonialist sprinkles water that has been blessed or prayed in over the people. This cleaning allows the participants to leave behind all the baggage or difficulties they may have brought with them to the ceremony, giving them the opportunity to be fresh and new.

The ceremonialist leads the people in calling upon outside help, the help of the spirits, the creator, the ancestors, the poderios (powers), the great master teachers, the healing spirits, the totem animals, plants, and minerals, the powers of nature such as the winds, the rains, the directions, and so on.

The ceremonialist leads the people in expressing great gratitude for all this help, the help that has been received in the past, and the help about to be received. The ceremony honors all the helping spirits and they are given offerings of tobacco, incense, fruit, songs, and sacred objects like corn pollen, cornmeal, cedar, flowers, colorfully decorated prayer arrows, decorated bowls, and the like.

The ceremonialist leads the people in alchemical transformation procedures, dances, songs, prayers, eating of sacred plants, and various methods that welcome a new reality, a healing, a great blessing, resulting in the realization of the purpose of the ceremony. The planting or harvest gets blessed, the patient gets healed, the marriage is performed, the recently diseased is sent on her way home to Spirit. This may take the bulk of the time of the ceremony, sometimes many hours, even days.

There is a way that the blessings of the ceremony are spread to all members of the community, even the ones who cannot be there, perhaps to the whole nation of tribes, or the world at large. In Buddhist ceremonies this may include all sentient beings.

Often the ceremony will include an opportunity for all participants to express themselves or bear witness to something. Northern Native American Church ceremonies follow this structure as do many Huichol and Shipibo ceremonies I have attended.

The ceremonialist closes the ceremony by releasing the helping spirits, the directions whom have been called in to help, and lets everyone know the ceremony is over and the feasting or celebrating may begin.

Obviously, this set of elements to a good shamanic ceremony are not always followed or are not appropriate for every ceremony. However they are a good set of guidelines and I am hard pressed to remember a powerful ceremony I attended where all these elements were not at least included momentarily. While almost all ceremonies of any kind have descended from these ancient shamanic guidelines most have been dispensed with in our everyday award style ceremonies, sports competition ceremonies, and ribbon cutting ceremonies of local governments and organizations. Some have been watered down tremendously such as placing ones hand on a bible for a moment and mumbling some words, a marching band playing a march or pop tune, the singing of the national anthem with hands on hearts, or a giant pair of plastic scissors cutting a ribbon to applause. These are a far cry from all participants being fully involved in the ceremony with the purpose being some kind of radical transformation through a powerful altered state.

Although raised in the Catholic Church and attending hundreds of ceremonies as a child I can’t say I truly enjoyed these ceremonies because I was only an observer. This is true of most Religious ceremonies today. The ceremonialist runs the whole thing and everybody else just watches. In the ancient traditions the ceremonialist was just a facilitator and everyone participated in the ceremony through singing and dancing, praying, and contributing in some way. Often all members of a ceremony would emerge covered with sweat from their exertions. I must say I enjoy this style immensely and have had some truly life changing experiences through participating this way. Like the Grinch I found my heart growing two more sizes bigger metaphorically speaking.

With people belonging to many different religions and everyone convinced their religion is the right one makes for any kind of meaningful ceremonies almost impossible to perform publically at this time. However given that many people of different religions also follow the shamanic path makes it possible for this ancient tradition to become a kind of meeting place, a neutral ground where all may participate. In order for that to happen fundamentalism of any kind will have to be retired because that is where conflict and competition arises. Little by little the ancient ways of the shamanic path are returning because the organized religions have failed to meet the needs of the people. Most people belong to them in order to experience community but many have drifted away because the price to their own freedom and integrity is too high. Today people are finding a sense of community on the shamanic path as never before. We all rely on this planet for our food, sustenance, and resources. We are learning that we must take care of the minerals, the plants, and the animals if we want to survive. We are discovering that we must transfer our allegiance from corporations, governments, and organizations of terror to our mother, the natural world where we all find common ground. That will be ground zero for community in the days to come. We are coming home.

JOSÉ STEVENS
José Stevens PhD is an international lecturer, corporate team builder and organizational coach, consultant and trainer. A psychologist, licensed clinical social worker and author of more than twenty books and numerous articles, he is also co-editor for A Journal of Contemporary Shamanism and a board member of the Society for Shamanic Practitioners. He is the founder, with his wife Lena, of the Power Path School of Shamanism and The Center for Shamanic Education and Exchange, a non-profit organization dedicated to educating youth in indigenous cultures. He has completed a ten-year apprenticeship with a Huichol Maracame in Mexico and has studied with the Shipibos of the Amazon and the Paqos of the Andes for the last thirty years.
Go to: www.thepowerpath.com
CrystalWind.ca is free to access and use.
Please donate a small gift of $11.11 or $22.22 or $33.33.
Thank you!
ॐ Namasté - Blessings!