Two houses are nearing completion at a small newbuild eco village in the northwest of Scotland. Achabeag Township has planning permission for 20 houses, which will be clustered together on sloping land overlooking the Sound of Mull. Of these 6 are designated as affordable housing, but with an average build cost of less than £100K none are likely to break the bank.

The first two dwellings are different in appearance but both are built to a very high standard – with exceptional levels of insulation, minimal heating requirements, met by a woodstove and off-peak electricity, heat storage in a thermal floor slab, and solar thermal panels for hot water. The full-height (single storey) internal living spaces have Douglas Fir structural frames and masses of natural light from roof glazing. Aluminum clad timber windows are virtually maintenance free.

The timber for both was sourced mostly from local forests in the Lochaber area, the insulation – using recycled newspaper, collected by local schoolchildren – processed by Warmcel. Novel sloping exterior walls are influenced by local vernacular building styles while pagoda-style roofs give individuality. 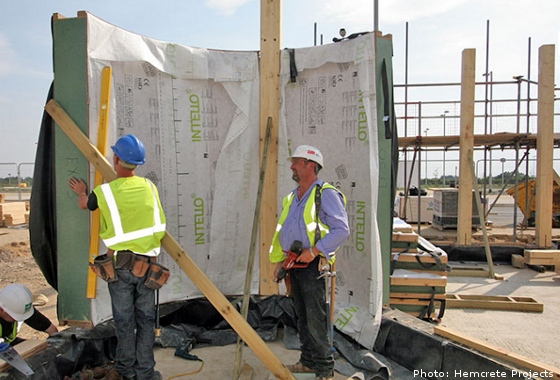 Developed by the Ardtornish Estate and Roderick James Architects LLP the Achabeag Township is intended to be a small sustainable community of highly energy efficient houses, within easy reach of the amenities of nearby Lochaline. The designs were born out of a Pattern Book created by the Roderick James practice that deliberately stipulates both a direction and coherent styles developed to ultimately create a township or village feel.

The first property takes on a crescent-shaped form that curves to create a sheltered outdoor space that looks down the Sound of Mull. Dissecting the curve is a feature-glazed shard that serves to emphasize the properties dramatic views that are enjoyed through a fully glazed façade, whilst drawing light into the centre of the plan. The main living area is open plan. This maximizes the amount of both space and light, whilst minimizing the amount of corridor space between rooms to deliver both ecological and environmental advantages.

In contrast to the crescent shaped form of its counterpart, the second property is aligned over a star shape layout, the form of which echoes the look of a traditional croft: a long and low, single storey building with white harled (rendered) walls, low eaves, dominant gable ends with chimney stacks, and small windows to the north and west. The properties two main ‘wings’ form a shallow V-shape and in doing so create a sheltered outdoor area that is accessible directly from the open plan living space.

Located within close proximity to each other and enjoying a coastal aspect, the single storey dwellings feature the hemp based prefabricated wall system that is particularly suitable for use in low-rise buildings, deployed around an oak frame in this case. Hemcrete Projects low-carbon prefabricated building system, Hembuild, has been used for the main walls of the houses, which also feature both a natural slate and sedum green roof, plus lime-based render supplied by Hemcrete Projects’ group company, Lime Technology, In order to ensure that the visual appearance of both properties sit comfortably within the landscape, the external walls have been subtly tapered, making them feel instantly integral to their surrounding environment. 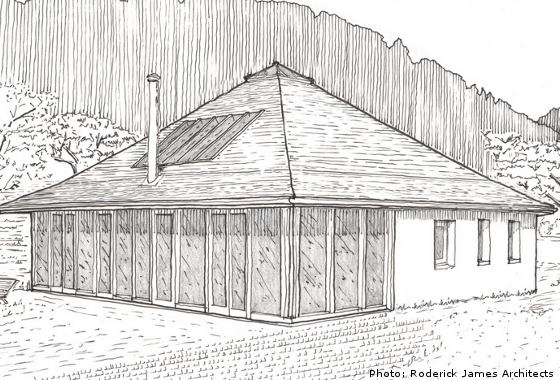 A sketch of another house planned for the Achabeag Township

Commenting on the decision to specify the Hembuild system, Peter Smith of Roderick James Architects said: “Hembuild ticks all of the boxes when it comes to delivering sustainable properties, and the system is ideally suitable for what are two totally different styled houses but which fulfill the requirements of a scheme where the use of natural materials and environmental sustainability are the order of the day.”

Developed to deliver highly sustainable and energy efficient buildings, the product is based around a bio-composite building material made from hemp shiv (the woody core of industrial hemp) mixed with a lime-based binder – Tradical Hemcrete. This product, when used in conjunction with equally efficient hemp fibre insulation quilt delivers a groundbreaking combination of insulation and thermal inertia.

Building using the system creates a substantial smoothing out of temperatures, thus reducing peak loads and the capital costs of an M&E system. The building fabric partially takes over the regulation of the internal conditions using the passive properties of Hemcrete, instead of using the active properties of the M&E system. This creates the potential for reducing capital and running costs.

In addition to exceeding expectations based on conventional steady state U-values and standard thermal modeling, the process also sequesters carbon. This arises due to hemp capturing carbon dioxide during its rapid growth, whilst releasing oxygen back into the atmosphere. The carbon is then locked up within the walls of the building to give a carbon negative solution.

We have 1549 guests and no members online